Fashionless Washington is so known for its ugly tote bags that it’s disgusting to even think about them for too long. As soon as a traveler descends upon Washington, the unsightly, dorky, typically creme bag creeps into your line of vision. Vaguely rectangular. Lumpy. Shapeless. Often stained from overuse. Like a state flower or bird, it’s everywhere

On Monday, the world witnessed Washington’s unfashionable black eye as GOP attorney Steve Castor showed up to the House Judiciary Committee to testify for the impeachment hearing carrying a Whole Foods tote bag containing his black binders. With a single ghastly green tote bag, he easily captured the attention of Washington’s media and punditry class. 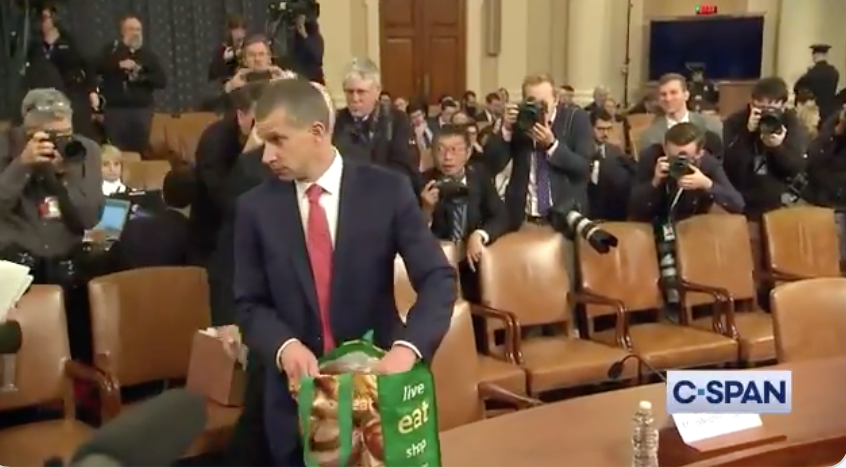 A moment of gratitude for C-SPAN’s longtime Comms Director Howard Mortman, who tweeted out a video of Castor unpacking the Whole Foods bag that quickly made the rounds.

No one carries such a bag into an impeachment hearing without a little planning. He could have literally chosen anything else — a duffle, a backpack. At this point, a garbage bag may have been a better choice.

“Steve Castor has mentioned his wife and kids a couple of times,” Sam Nunberg, a former political adviser to President Trump who once jokingly described himself as Mad Men‘s “Don Draper,” told The Mirror when questioned about the tote bag. “I don’t think he’s the fashion type. He’s a Hill staffer. It’s not his thing.”

Or his bag, apparently.

“He needed a big bag for binders, etc…” Nunberg reasoned, adding that he would never be caught lugging around a tote bag. (RELATED: Sam Nunberg Has Spent One Eighth Of His Life Working For Mr. Trump)

Nothing is too petty for Washington these days, be it first lady Melania Trump‘s allegedly ghastly overcoat (at least according to WaPo fashion writer Robin Givhan), or that weird black thing recently spotted at the far edge of Rep. Eric Swalwell‘s (D-Calif.) right eye. (This might be a good time to mention Swalwell’s recent possible TV farting episode, which MSNBC claims was a glass scraping across a desk.)

George Conway, professional Trump hater by day and Kellyanne Conway‘s husband by night, couldn’t help but get in on the tote bag discourse.

“idk that’s a very liberal-looking Amazon-Wapo kinda bag Castor has and I hope the security screeners checked it for tofu and kale,” Conway tweeted. (RELATED: George Conway Goes After His Wife On Twitter)

Impeachment hearings are being watched. They’ve taken over our TV’s. Observers can hardly be blamed that, culturally, everything is under a microscope.

At least Melania Trump has the good sense to not carry a tote bag.

“I would like to personally offer to send anyone testifying before Congress a New York Magazine tote bag of their choosing,” announced Olivia Nuzzi, a writer for New York Mag, when I asked her about the loathsome bag.

Eve Peyser, a Manhattan-based freelance writer whose bylines have appeared in the NYT and New York Mag, sympathized with Castor’s sartorial choice. “I’ve put on a fancy ass dress, done my makeup, and then ruined the whole thing by slinging a dirty ass tote bag around my shoulder too many times to ever judge this man,” she tweeted.

Former White House Press Secretary Sean Spicer, a recent contestant on ABC’s “Dancing With The Stars,” wouldn’t address the tote bag head on, but seemed to suggest there is something fashionably far worse.

“I’ve stepped up my game in recent years, but used to rely on Safeway plastic bags,” he told me.

Asked if he thinks tote bags are a good look, especially for men, a male journalist in Washington replied, “No, I hate those.”