However, numerous country clerks across New York are dismayed at the new law and contend it opens the door to voter fraud, identify theft and even terrorism.

“There will be a gap from today to Oct. 1, that anyone who is here illegally can get into a federal building and can fly on our airplanes and can cross our borders,” Erie County Clerk Michael Kearns, a Democrat, said Saturday during an appearance on “Fox & Friends.” 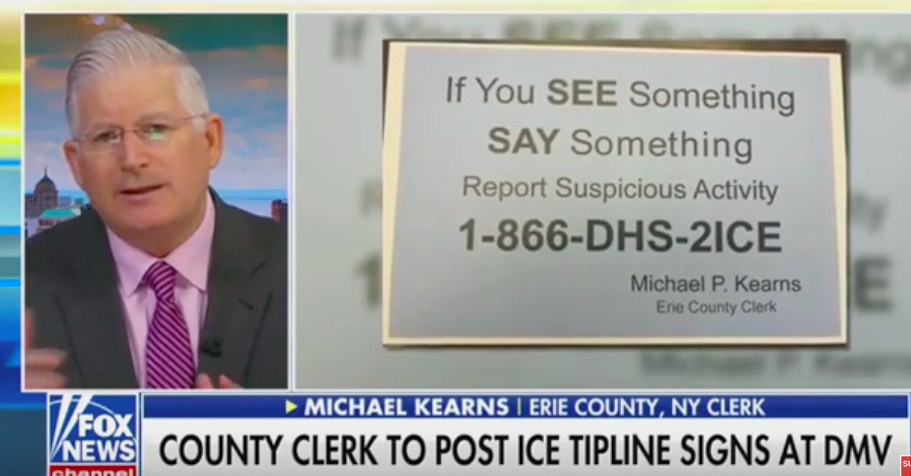 “I’m now going to have to accept a report card from a foreign country and foreign documentation, a foreign passport as authenticated documents. I, myself, as the clerk am going to have to do that,” Kearns said. “So they have diminished a New York state driver’s license and we’re very concerned for our safety and security because western New York is a border to Canada.”

Kearns is far from the only county clerk in the state to stand against the Green Light law. After Democratic Gov. Andrew Cuomo signed it in June, clerks in Niagara, Rensselaer, Allegany and Chautauqua counties declared that they would refuse to comply.

The Green Light law also prohibits employees at auto bureaus from reporting illegal aliens attempting to obtain driver licenses to Immigration and Customs Enforcement (ICE). Kearns is working around this law by posting signs on customer service windows that encourage regular citizens to report such activity to an anonymous tip line. The New York government has sent Kearns a cease and desist order, but he said he won’t take the signs down.

“This is all a power grab for the ballot box in New York, trying to give illegals the right to vote. We are not — today, we are less secure than we were. And a driver’s license is a privilege, but, also, it’s for identification,” the county clerk said, adding that “absolutely” an illegal alien could participate in an election because of this new law. (RELATED: Trump’s Latest Asylum Deal Is Working Just As The Administration Intended)

“So we are going to have voter fraud in New York state, and now New York state has given the clerks an edict to stands down. I’m not standing down. I will do whatever I can to stop voter fraud,” he concluded.