The top judge on the federal court overseeing the U.S. government’s surveillance activities accused the FBI on Tuesday of providing false and misleading information about Carter Page in applications to wiretap the former Trump campaign adviser.

Judge Rosemary Collyer, the presiding judge on the Foreign Intelligence Surveillance Court (FISC), issued the stern and unprecedented rebuke in a memo ordering the FBI to come up with a series of proposals by Jan. 10, 2020, on how to ensure the accuracy of information in future applications for surveillance warrants.

“The FBI’s handling of the Carter Page applications, as portrayed in the [Office of Inspector General] report, was antithetical to the heightened duty of candor described above,” Collyer wrote in the order, first reported by The New York Times.

“The frequency with which representations made by FBI personnel turned out to be unsupported or contradicted by information in their possession, and with which they withheld information detrimental to their case, calls into question whether information contained in other FBI applications is reliable,” she added. (RELATED: ‘It’s Pretty Bad’: Michael Horowitz Sums Up FBI Abuses Against Trump Aide)

The Justice Department inspector general (IG) found in a report published on Dec. 9 that the FBI failed to inform officials with the Justice Department’s National Security Division, as well as the FISC, about exculpatory information that undercut the bureau’s theory that Page was an agent of Russia.

The FBI relied heavily on the infamous Steele dossier to assert that in the applications that there was probable cause to believe that Page was working for Russia. The FISC granted the first warrant against Page on Oct. 21, 2016. 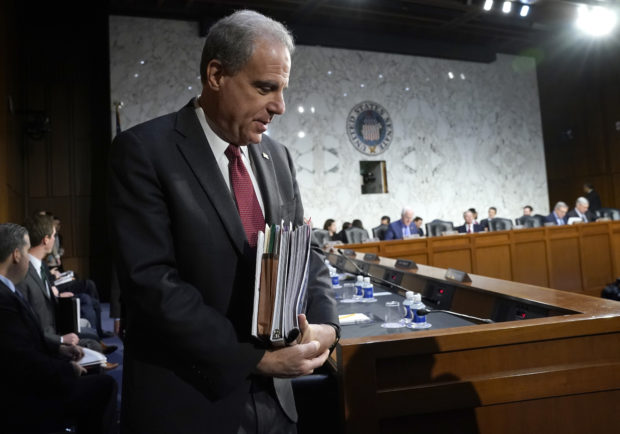 Michael Horowitz, inspector general for the Justice Department, returns for testimony following a short break before the Senate Judiciary Committee in the Hart Senate Office Building on December 11, 2019 in Washington, DC. (Photo by Win McNamee/Getty Images)

The IG report that the FBI also withheld information that undercut the reliability of the dossier, and its author, Christopher Steele.

Collyer pointed to the IG’s finding that FBI agents failed to disclose that Steele said in one interview in early October 2016, before the bureau submitted the first wiretap application, that one of the main sources for the dossier was a “boaster” and “embellisher.” Agents also withheld statements from Steele’s main collector of information, who refuted key parts of the dossier during an interview in January 2017.

That source told FBI agents that he provided Steele with “rumor and speculation” that Steele represented as fact in the dossier.

FBI agents also failed to disclose Page’s statements on Aug. 20, 2016 to an FBI informant that contradicted Steele’s assertion that the Trump aide was part of a “well-developed conspiracy of co-operation” between the campaign and Russian government.

Steele, a former British spy, asserted in the dossier that Page was working under the direction of Trump campaign chairman Paul Manafort as part of the conspiracy. Steele also wrote that Page met secretly with a Kremlin official, Igor Diveykin, in Moscow in July 2016 to discuss blackmail material involving Donald Trump and Hillary Clinton.

According to the IG report, Page told the FBI informant, Stefan Halper, that he had never talked to Manafort, and that he did not meet with Diveykin.

Collyer said the FISC was unaware of many of those omissions until the IG report was published last week.

“This order responds to reports that personnel of the Federal Bureau of Investigation (FBI) provided false information to the National Security Division (NSD) of the Department of Justice, and withheld material information from NSD which was detrimental to the FBI’s case, in connection with four applications to the Foreign Intelligence Surveillance Court (FISC) for authority to conduct electronic surveillance of a U. S. citizen named Carter W. Page,” Collyer wrote.

“When FBI personnel mislead NSD in the ways described above, they equally mislead the FISC.”