Members of the media gloated after the House voted to pass both articles of impeachment against President Donald Trump on Wednesday evening.

The House voted Wednesday to pass both articles of impeachment — abuse of power and obstruction of Congress — with votes of 230-197 and 229-198, respectively.

“People say we live in a post-truth world,” CNN’s Brian Stelter tweeted. “I hate that term. Some truths cannot be denied — like the truth of this impeachment vote.”

“On Trump’s first weekend in office, Kellyanne Conway coined ‘alternative facts.’ Rudy Giuliani later said ‘truth isn’t truth.’ Trump told a crowd that ‘what you’re seeing and what you’re reading is not what’s happening.’ But there is no way to deny: Trump has been impeached,” Stelter added in another tweet.

Stelter, along with CNN’s Oliver Darcey, re-tweeted multiple media reactions about the impeachment vote, with many of them being positive. Both also re-tweeted the Thursday front pages for numerous newspapers.

On Trump’s first weekend in office, Kellyanne Conway coined “alternative facts.” Rudy Giuliani later said “truth isn’t truth.” Trump told a crowd that “what you’re seeing and what you’re reading is not what’s happening.” But there is no way to deny: Trump has been impeached.

“This is the first time -if you don’t count 2018 -Donald Trump has suffered poltical consequences for his actions,” MSNBC anchor Katy Tur noted. She continued on with a long thread of allegations against the president, including “separating families and traumatizing children.” (RELATED: EXCLUSIVE: We Asked Every GOP Senator About Impeachment. Seven Ruled It Out)

“No matter what happens next, even if the Senate acquits him, even if he is re-elected, he will forever have an asterisk next to his name,” Tur added.

Bade, Demirjian and Min-Kim are also CNN analysts. The tweet has since been deleted. 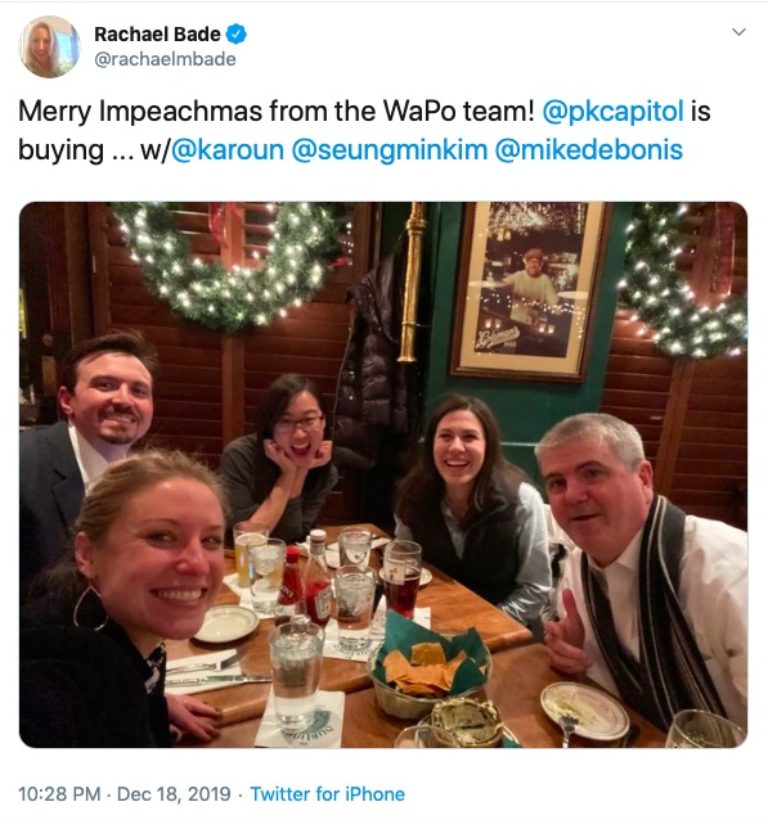 “The reporter who sent out this ill-considered tweet was celebrating being off the clock after a long day covering impeachment. She wasn’t celebrating impeachment,” Kristine Coratti Kelly, vice president of communications at The Washington Post, told Daily Caller White House correspondent Amber Athey.

MSNBC’s Chris Hayes parroted Tur’s commentary, suggesting it was “the first time in the man’s  [Trump] life that he is facing any concrete judgment on the nature of his behavior,” according to Darcy.

“So it turns out that day 1063 is impeachment day,” The Daily Beast’s editor-at-large Molly Jong-Fast tweeted.

He tweeted that “No matter what happens in the next year of Trump’s presidency, the 1st paragraph of his political obituary will contain this sentence: ‘Trump was impeached by the House on December 19, 2019, becoming only the 3rd president in history to be so admonished.'”

The Republican-led Senate will now have to determine whether to remove Trump from office.