The President was impeached on one count of abuse of power, and another count of obstruction of Congress, and will now face a senate trial to determine rather or not he gets to stay in office. The three Democrats who broke with their party all represent districts which Trump won in 2016. (RELATED: The Tide Is Turning Against Democrats On Impeachment)

Jeff Van Drew: One of the few Democrats to vote against impeachment may soon be a Republican. Van Drew represents a New Jersey district that voted for Trump by nearly 5% in 2016, but came under fire from New Jersey Democrats, including Gov. Phil Murphy after he was one of just two Democrats to vote against opening an impeachment inquiry. The freshman congressman has neither confirmed nor denied reports from over the weekend that he is preparing to switch party affiliations, but recent personal moves suggest Van Drew’s party switch will come to fruition. Van Drew lost five staffers, who resigned due to his party switch. Van Drew suggested earlier this week that his staffers were coerced by Democrats to quit.

Collin Peterson: The 75-year-old chair of the House Agriculture Committee was one of two Democrats to vote against opening the impeachment inquiry, and represents one of the more conservative districts in the country. The president won Peterson’s Minnesota district by 30% in 2016, and Peterson has made clear throughout the process that he was not supportive of his party’s impeachment push. However, unlike Van Drew, Peterson has made clear that he is not considering a party switch at this stage of his career despite having been approached by top Republicans. 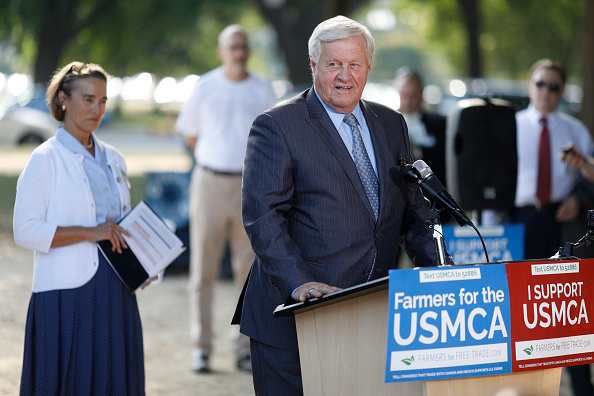 Chairman of the House Agriculture Committee Rep. Collin Peterson delivers remarks during a rally for the passage of the USMCA trade agreement, on September 12, 2019 in Washington, DC. (Photo by Tom Brenner/Getty Images)

Jared Golden: The freshman congressman from Maine was the only House member to split the baby on the two articles of impeachment, voting to charge Trump with abuse of power, but against the obstruction of Congress charge. Golden was narrowly elected last Fall to represent Maine’s 2nd Congressional District, a district the president won by 10% in 2016. Golden’s victory was the first since Maine instituted its ranked-choice voting system, and came despite Golden’s opponent, former Republican Rep. Bruce Poliquin having won a plurality of the vote.