The Supreme Court took up another dispute along the church-state divide Wednesday, agreeing to decide whether two former teachers can bring employment discrimination lawsuits against the Catholic schools that fired them.

At issue in those cases is the scope of the “ministerial exception,” which exempts religious employers from workplace bias claims when hiring and firing certain workers. The ministerial exception is why, for example, the Catholic Church can exclude women from the priesthood despite civil rights laws barring sex-based discrimination.

“Parents trust Catholic schools to assist them in one of their most important duties: forming the faith of their children,” said Montserrat Alvarado of the Becket Fund for Religious Liberty, a public interest law group that represents the schools. “If courts can second-guess a Catholic school’s judgment about who should teach religious beliefs to fifth graders, then neither Catholics nor any other religious group can be confident in their ability to convey the faith to the next generation.”

Agnes Morrissey-Berru and Kristen Biel are the teacher-plaintiffs in Wednesday’s cases. Morrissey-Berru brought an age discrimination lawsuit against Our Lady of Guadalupe School after her dismissal in 2015. Beil sued St. James School after her 2014 termination, claiming she was fired after disclosing a breast cancer diagnosis. Both schools are in the Archdiocese of Los Angeles. School administrators say the firings were a function of poor performance, not age or illness.

Federal trial judges ruled for the schools in both cases. Having found that the schools are religious organizations, the determinative question was whether the teachers count as “ministers.” The trial courts said they did, since their jobs involved “conveying the church’s message,” praying with students, and “including Catholic teachings” in daily lessons. (RELATED: Insurance Companies Ask Supreme Court For $12 Billion In Obamacare Losses) 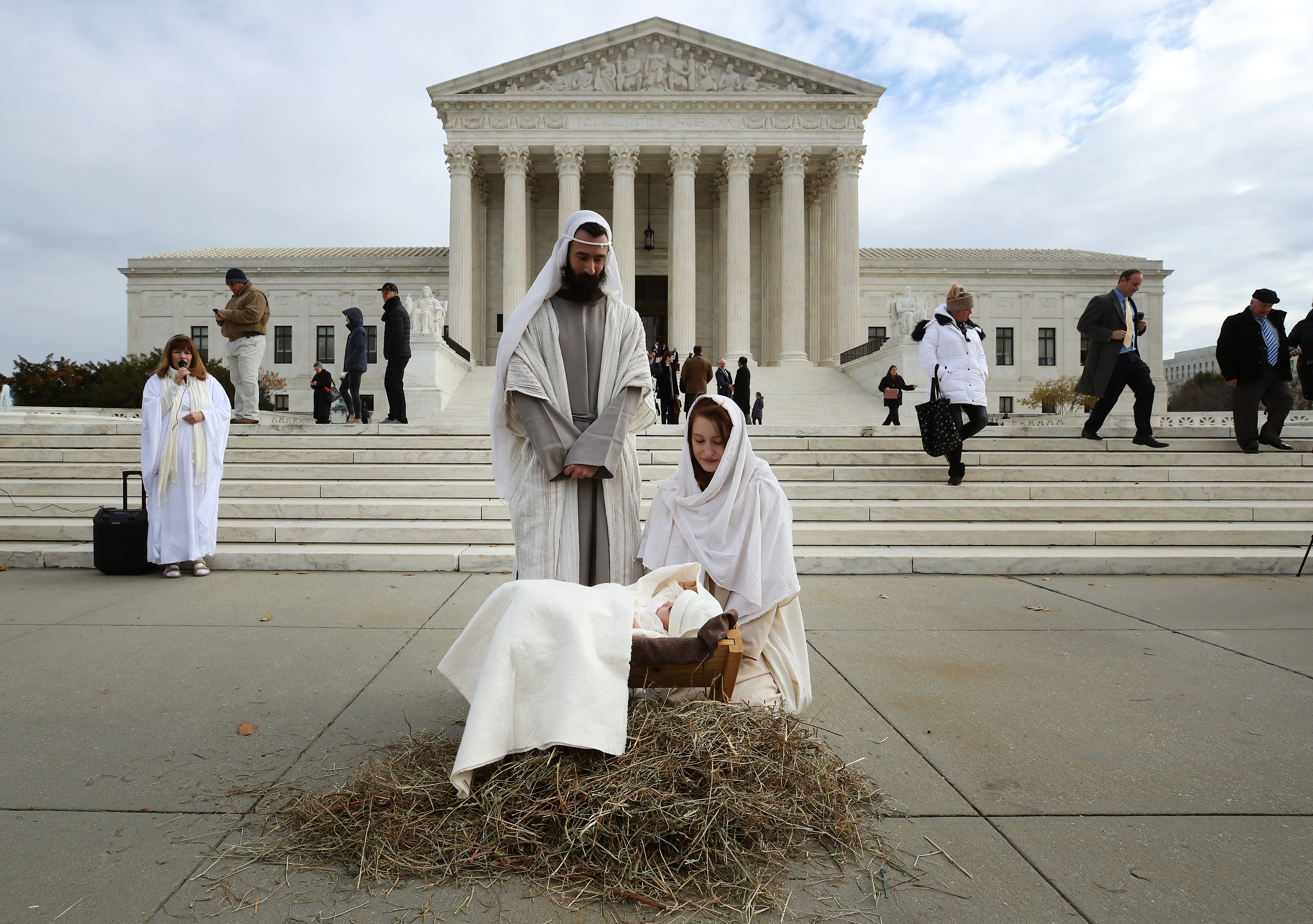 A live nativity scene is conducted in front of the Supreme Court on December 4, 2019. (Mark Wilson/Getty Images)

The 9th U.S. Circuit Court of Appeals reversed both decisions. In each case, the appeals panels emphasized that the teachers did not hold leadership positions, present publicly as ministers, or possess theological training.

Judge Ryan Nelson and eight other judges dissented after the full 9th Circuit refused to reconsider the panel ruling in Biel’s case. Nelson said the panel decision “embraced the narrowest reading of the ministerial exception and diverged from the function-focused approach taken by our court previously, our sister courts, and numerous state supreme courts.”

A group of law professors is supporting the teachers before the Supreme Court. Like Nelson, the professors say judges must focus on function when determining if a given worker is covered by the ministerial exception under the 2012 Hosanna-Tabor case. That means asking whether the employee preaches the church’s beliefs, teaches its faith, and furthers its mission. The 9th Circuit’s focus on titles and credentials will lead to “improper second-guessing of religious judgments,” the professors warned.

“The Ninth Circuit’s reasoning invites courts to second-guess the religious schools’ judgment about what types of religious training are essential to the school’s religious mission,” their legal brief before the justices reads. “This entangles courts in one of the very religious questions that the ministerial exception is designed to avoid.”

Disputes over religion and public life have featured on the high court’s docket with increased regularity in recent years. A seven-justice majority rejected a challenge to a 40-foot World War I memorial cross on public land in June. The majority said memorial crosses are closely associated culturally with the First World War, and that the passage of time creates “a strong presumption of constitutionality.”

When the high court returns in January, the justices will also consider a state tax-credit program the Montana Supreme Court struck down because it supports religious schools. That dispute follows a 2017 decision in which the court said Missouri was wrong to exclude a Lutheran church from a public grant to resurface playgrounds because of its religious status. The ruling did not address programs like the sort at issue in the Montana case.

The court will hear arguments in Wednesday’s cases in late spring, with a decision to follow by June. The cases are No. 19-267 Our Lady of Guadalupe v. Morrissey-Berru and No. 19-348 St. James School v. Biel.