A Canadian whistleblower who exposed a massive investment fraud by Arab businessmen may spend Christmas trapped in Dubai after the wrongdoers framed him for the crimes, the advocacy group Detained in Dubai said Monday.

André Gauthier flagged financial impropriety to the owners of Gold AE in 2014 and the entire executive management team fled the United Arab Emirates, the group said. Gauthier was appointed to audit the accounts and try to recover losses, but the owners then tried to pin the fraud on Gauthier, and multiple criminal and civil cases were brought against him in the Arab kingdom, it said.

He’ll have a hearing on Dec. 24 that could exonerate him, or keep him trapped in the country.

“I just want my father to come home,” his son Alexis said in a press release. “It has been half a decade of our lives, and everyone knows he is innocent. I just hope we get good news this Christmas, and I can see my father again soon.”

Radio Canada International reported in May that the 65-year old metals trader flagged fraud to the chairman of Gold AE, who is a member of the royal family. The executives were charged criminally but fled the country. Gauthier, the whistleblower, was then made the fall guy for the missing $30 million, even though he was not even in the country when it went missing, he told RCI.

Detained in Dubai CEO Radha Stirling said in the statement that the group began fighting for him last year. “There have been high level talks between the Trudeau government and the UAE to resolve the issue. Throughout, we have emphasized that targeting André, who has been cleared by two independent expert reports, is potentially damaging to foreign investor confidence in the Emirates. If someone is punished for exposing a fraud, while the real perpetrators are allowed to go free; how can businesspeople feel secure that their investments are safe in the UAE?”

“We are very hopeful about the hearing on Christmas Eve. André is in good spirits and we are confident that his innocence has been thoroughly proven to UAE authorities,” Sterling added. “Not only is André not guilty, he actually prevented Gold AE investors from being bilked of possibly millions of dollars more than they had already lost. He deserves to be commended, not convicted.”

The embassy of the UAE in Washington did not return a request for comment.

The Daily Caller News Foundation previously reported that numerous westerners are trapped in Arab countries for years on end. In many of those countries, “travel bans” prevent foreigners from leaving if lawsuits are filed against them or if they owe debts. 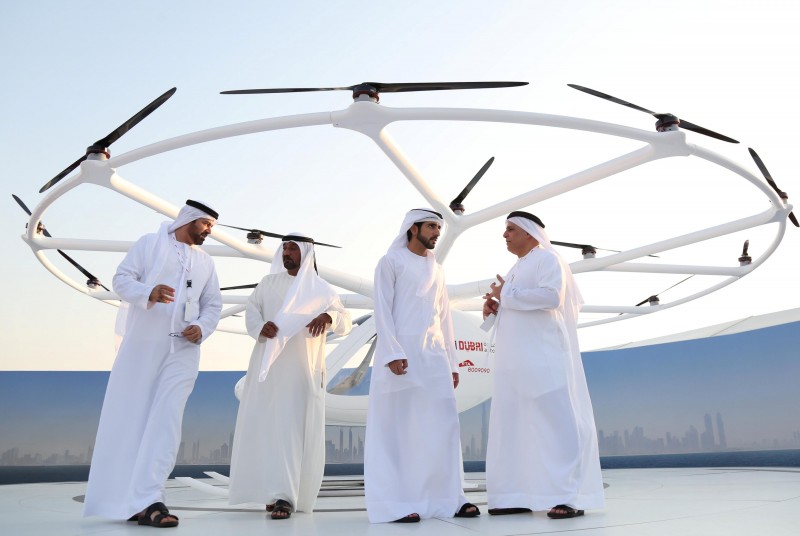 A flying taxi in Dubai / REUTERS

Joseph Sarlak, a sick, 70-year-old Australian grandfather has allegedly been wrongfully imprisoned in Qatar since 2016, with the Australian government apparently unable to get him out, Australian media reported on July 24.

Jean-Pierre Marongiu, a French entrepreneur, said he was trapped in Qatar for five years. Foreigners who operate companies in the country must have a local “sponsor” who co-owns the firm. Marongiu said his Qatari sponsor — a cousin of the country’s ruler — raided the firm’s bank account, exhausted all of its savings, and wrote bad checks. Then Marongiu was held responsible for the bad checks, and was sentenced to 33 years in “one of the toughest detention centres in the world,” he wrote on his website.

A State Department official told the DCNF there is little the U.S. can do to rescue Americans subject to a travel ban. (RELATED: Arab Sheikh Of Beverly Hills Tried To Force American Security To Murder Two People, Federal Lawsuit Says)

“We are aware of multiple instances in which U.S. citizens have been subjected to exit bans in Qatar,” the official said, declining to give an exact figure because of privacy. “In a foreign country, U.S. citizens are subject to that country’s laws, even if they differ from those in the United States. … Consular officers can provide a list of local lawyers, but cannot provide legal advice or effect the release of U.S. citizens who are detained or subject to exit bans.”