More than 200 members of Congress urged the Supreme Court to reconsider Roe v. Wade on Thursday, ahead of a March case concerning the constitutionality of a Louisiana regulation on abortion providers.

The lawmakers, who include 39 senators and 168 members of the House of Representatives, filed a legal brief arguing abortion case law is haphazard and inconsistent, such that reconsideration of Roe is in order.

“Forty-six years after Roe was decided, it remains a radically unsettled precedent: two of the seven Justices who originally joined the majority subsequently repudiated it in whole or in part, and virtually every abortion decision since has been closely divided,” the brief reads.

Americans United for Life (AUL) prepared Thursday’s filing. The Senate leaders of the coalition are Sens. John Kennedy of Louisiana and Marsha Blackburn of Tennessee. The House leaders are House Minority Whip Steve Scalise and Rep. Michael Johnson, both of Louisiana.

The Supreme Court’s 1992 Casey decision exemplifies the permanent flux of abortion jurisprudence, the brief argues. Casey involved a Pennsylvania law requiring doctors to counsel patients about abortion 24 hours before the procedure and obtain parental consent if the patient is a minor, among other things. The high court upheld those requirements. In so doing, it overturned two decisions from the 1980s that blocked comparable regulations.

A similar sequence preceded the 2007 Gonzalez v. Carhart decision, the lawmakers note. In Gonzalez, the high court upheld the federal Partial-Birth Abortion Ban Act, which prohibited a termination method called intact dilation and extraction. Just seven years before Gonzalez, however, the justices struck down a Nebraska law much like the federal PBA ban.

“These incessant retrenchments show that Roe has been substantially undermined by subsequent authority, a principal factor the Court considers when deciding whether to overrule precedent,” the brief reads. “Casey clearly did not settle the abortion issue, and it is time for the Court to take it up again.” 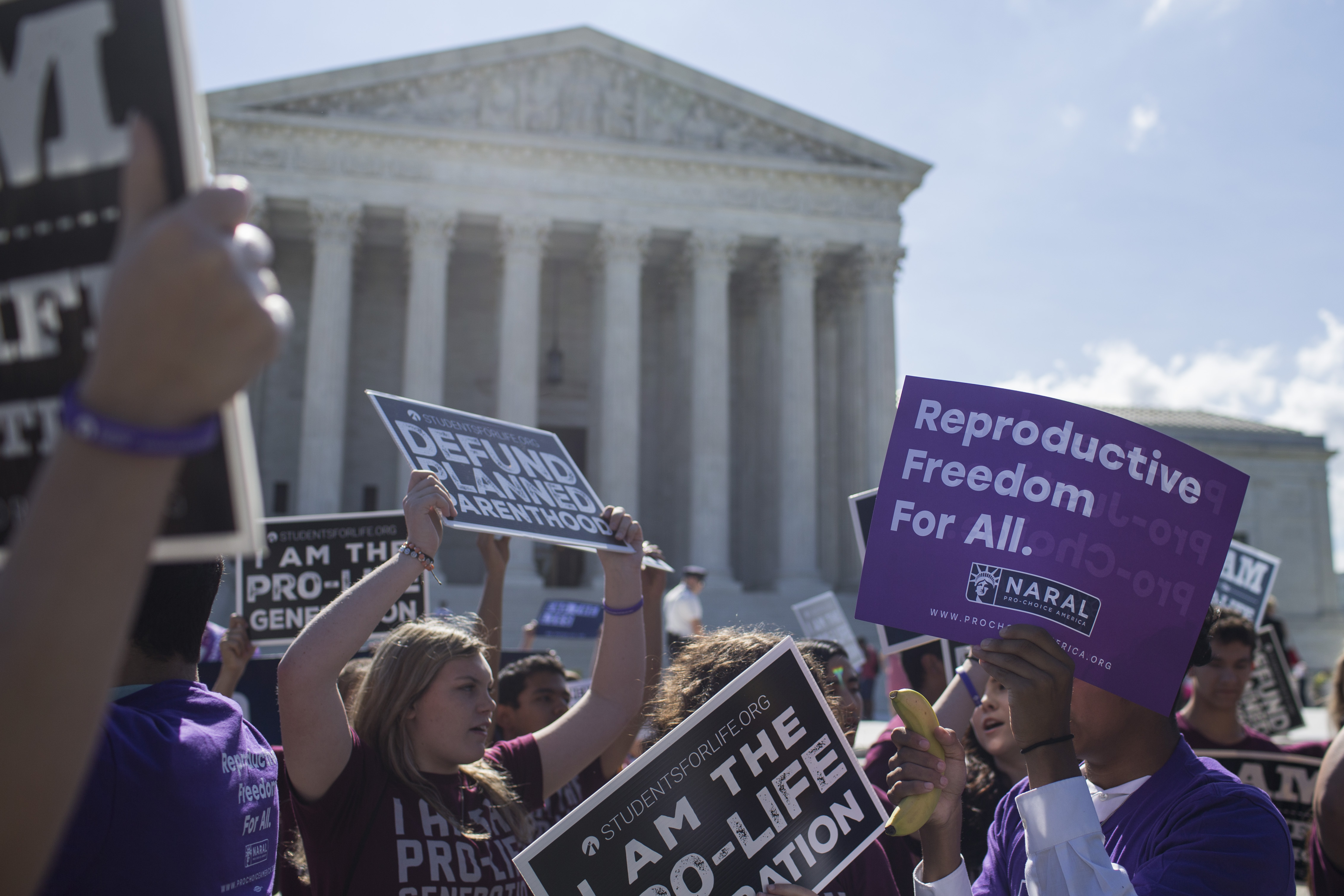 Abortion opponents and supporters demonstrate in front of the Supreme Court on June 25, 2018. (Zach Gibson/Getty Images)

At issue in the Louisiana dispute is a law called Act 620, which requires that abortion providers have admitting privileges at a local hospital. Lawyers for the state told the justices in legal briefs that the law “improves abortion safety by means of doctor credentialing,” since the admitting privileges application process ensures a high level of physician competency. The requirement is necessary because of the “long, disturbing history of serious health and safety problems” in Louisiana abortion clinics, the state’s brief argues.

A coalition of providers challenging Act 620 say admitting privileges have little bearing on professional fitness. Privileges are sometimes conditioned on factors having nothing to do with ability, like admitting a certain number of patients each year. As such, the providers believe the law’s true purpose is to close abortion clinics by imposing needless requirements with which physicians can’t realistically comply.

A federal trial judge agreed, finding two of Louisiana’s three abortion clinics would close if Act 620 were enforced. The judge said the increased wait times and travel distances which would follow create an “undue burden” on abortion access.

The 5th U.S. Circuit Court of Appeals reversed and upheld the law, so the plaintiff physicians appealed to the Supreme Court. The justices said the law could not take effect while litigation continued in February 2019. Arguments in the case are scheduled for March 4, with a decision to follow by June.

Approximately 10,000 abortions are performed in Louisiana each year.