Pope Francis caused widespread confusion among Catholics when he agreed to recognize bishops appointed by the authoritarian Chinese government in 2018. Over a year later, the pope has kept silent as China continues religious persecution, imprisons priests, and destroys Muslim graveyards.

Catholic authors and theologians provided the Daily Caller News Foundation with a variety of reasons on why Pope Francis keeps silent on Chinese persecution, and why the pope aligned the Catholic Church with the Chinese government in the first place.

“Francis continually denounces Western countries for any efforts at border control, but stays silent on China’s genocide against the Uighur Muslims; on its persecution of Christians; on its escalating crackdown on Hong Kong,” Catholic author and commentator John Zmirak told the DCNF. “Is this a replay of the Hollywood studios that vetoed anti-Hitler movies, for fear of losing business in Germany? Or is it darker? Is what we’re seeing more like the Soviet Union’s stifling of anti-fascist rhetoric after the Molotov-Ribbentrop Pact in 1939?”

But this same Chinese government appointing bishops also persecuted Christians for decades, particularly after Communists took control of China in 1949. Led by Catholic bishops appointed by past popes, Chinese Catholics have practiced their faith through underground churches to avoid arrest.

The Chinese government continues to harass, detain, and arrest Chinese Catholics. As recently as Dec. 30, 2019, a Chinese court sentenced a priest to nine years in prison after the priest called the Chinese Communist Party “morally incompatible with the Christian faith.”

Francis’s agreement with China caused widespread confusion among faithful Catholics and Catholic leaders, many of whom quickly denounced the deal. The former archbishop of Hong Kong, Cardinal Joseph Zen, called the agreement “an incredible betrayal,” adding that “a church enslaved by the government is no real Catholic Church.”

“What are they going to do about the underground bishops not recognized by China?” Rev. Bernardo Cervellera, who is a member of the Pontifical Institute for Foreign Missions and the editor of Asianews.it, asked The New York Times in an interview. “Or those that are in jail, or those who don’t want to belong to the patriotic church, what will happen to them?”

Dr. Chad Pecknold, an associate theology professor at The Catholic University of America, told the DCNF he believes Francis made the move out of a desire to regularize relations with China. (RELATED: Jesuit Priest’s Comment On Homosexuality Unveils The ‘Most Insidious Problems Facing All Christians Today,’ Theologian Says)

“I think Pope Francis, like Pope Benedict before him, wants to regularize relations with China because that’s just the sort of thing the Church does,” Pecknold said.

The Catholic Church has entered into hundreds of concordats throughout its history, Pecknold said. He noted in a December 2019 op-ed that the Church entered into a 1933 concordat with Germany that was “signed to protect the Catholic Church from National Socialism” — a deal the Nazis violated almost immediately. Pope Pius XI would go on to publicly urge German Catholics to resist Germany’s “national religion.”

Pecknold said the Vatican’s agreement with China is similar to the Vatican’s concordat with Germany, but as Chinese persecution continues, the Vatican will need to “speak boldly against China’s abuses” just as Pope Pius XI once did with Germany.

Other Catholic authors and commentators question whether Francis might have more nefarious motives. 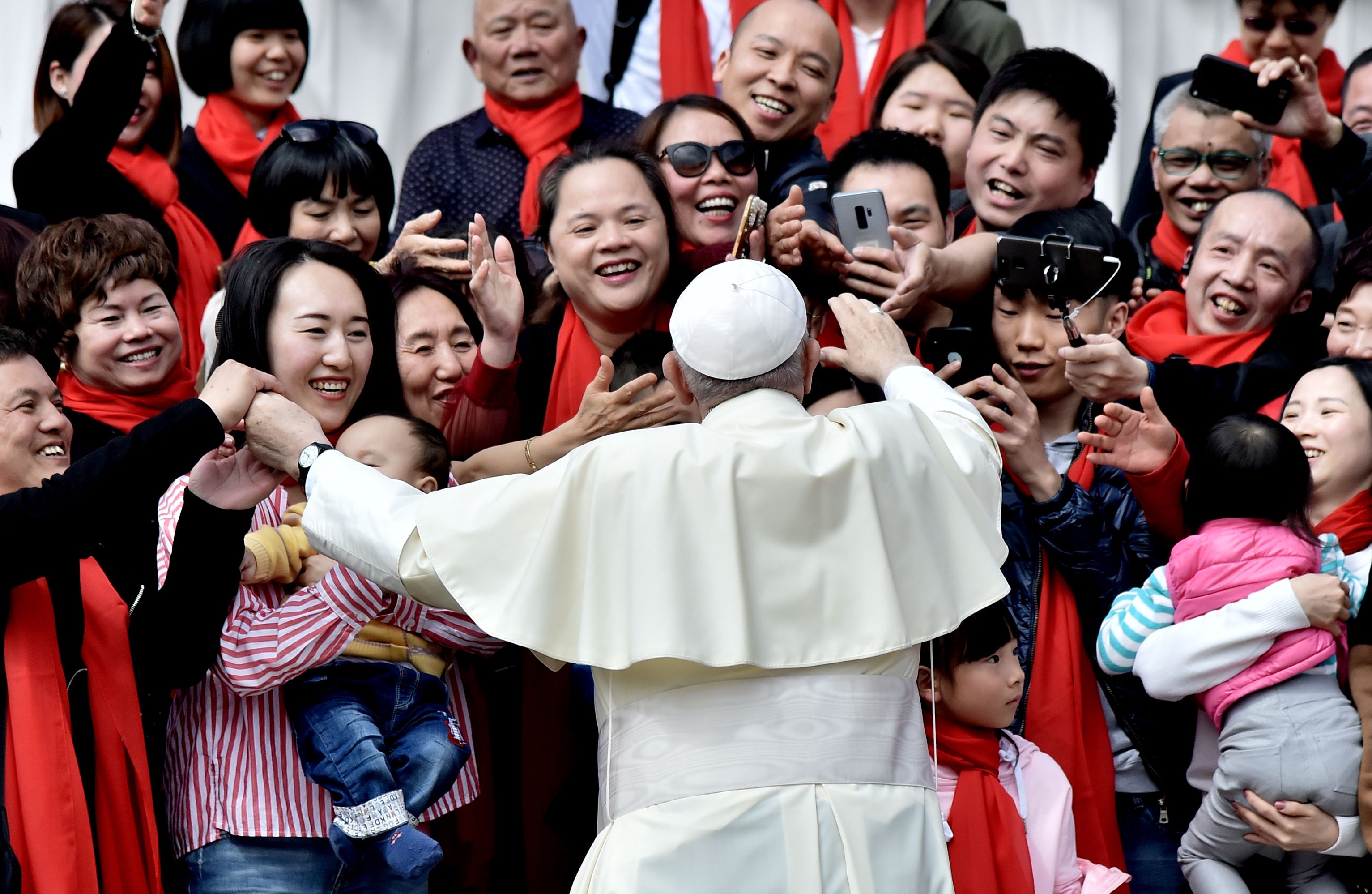 Pope Francis greets faithful from China as he arrives for his weekly general audience in April 2018, on St. Peter’s square in the Vatican. (TIZIANA FABI/AFP via Getty Images)

Author Henry Sire, a Catholic historian, suggested Francis is playing a “geopolitical role as an enemy of the United States” in order to gain acclaim. (RELATED: Chinese Government Appears To Have Been Destroying Muslim Cemeteries For Years)

“A good working agreement with China would be a snook cocked at Trump,” Sire told the DCNF. “Secondarily, I think he was also attracted by the prospect of solving a problem in which previous popes have failed, and showing how a liberal pope, untrammeled by Vatican convention, could score a success that eluded the hidebound curialists.”

But because Pope Francis is “amateurish and incompetent,” Sire said the opposite has happened: “He has simply played into the hands of the Chinese dictatorship.”

“The boot-licking media are never going to mention this blunder, as they would have done with a fanfare if it had been Benedict XVI, but I hope the realities of what is going on in China will break through to enough people in the hierarchy and show them that this is yet another of Francis’s disasters,” he said.

Zmirak, who is the author of “The Politically Incorrect Guide to Catholicism,” said he worries Francis’s Vatican is cultivating the China alliance as part of his struggle against the West, particularly the United States.

“Why else would the highest Vatican authority on economics, Bishop Marcelo Sorondo, take a carefully shepherded tour of China, then return claiming that this Communist dictatorship is the best practitioner of Catholic social teaching,” Zmirak told the DCNF. The author was referring to remarks made by Sorondo following a 2018 visit to China. (RELATED: China Claims It Arrested 13,000 Uyghur ‘Terrorists’ Since 2014)

“Right now, those who are best implementing the social doctrine of the Church are the Chinese,” Sorondo told the Vatican Insider, applauding China’s efforts to follow the green initiatives spelled out in Pope Francis’ 2015 encyclical, Laudato Si. Sorondo also accused President Donald Trump of allowing himself to be manipulated by global oil firms and praised China for defending Paris Climate Accord.

“You cannot think that the China of today is the China of [the time of] John Paul II, or Cold War Russia,” Sorondo said.

Zmirak argued Francis continually denounces all Western efforts at border control even as he stays silent on the Chinese genocide against Muslims, persecution of Christians, and crackdowns on Hong Kong.

“Is this a replay of the Hollywood studios that vetoed anti-Hitler movies, for fear of losing business in Germany,” he asks. “Or is it darker? Is what we’re seeing more like the Soviet Union’s stifling of anti-fascist rhetoric after the Molotov-Ribbentrop Pact in 1939?”

Cardinal Zen spoke out against Francis’s deal with China in an October 2018  op-ed to The NYT where he condemned the pope’s actions as a desperate plea to Chinese President Xi Jinping to recognize his authority.

“If I were a cartoonist I would draw the Holy Father on his knees offering the keys of the kingdom of heaven to President Xi Jinping and saying, ‘Please recognize me as the pope,'” Zen wrote. He did not respond to a request for comment from the DCNF.

According to Zen, Pope Francis comes from Argentina where military governments and the rich oppressed the poor together. Communists would “come out to defend the poor,” and Zen believes this may have caused Francis to have natural sympathy for these communists. But Zen says that Francis does not know them as the “persecutors they become once in power, like the Communists in China.”

Catholic author and commentator Phil Lawler agreed with Zen’s assessment. “Dealing with Beijing is dangerous, because they’re determined to control the Church,” Lawler told the DCNF.

“Cardinal Parolin was given a mandate by the Pope to get a deal done. So he shut out those (like Zen) who voiced reservations that would slow progress toward a deal,” the author explained.

“Pope Francis wants the Catholic Church to operate freely in China, which will be possible only if the regime allows it. He’s willing to sacrifice doctrinal clarity — something that’s never been important to him — toward that end. So that’s what is happening now. The Catholics who cling to doctrine are being suppressed; the regime is getting what it wants.”

Lawler warns that Francis’s dealings with China are yet another illustration of how Pope Francis will not tolerate dissidence.

“For all his talk about frank discussion and decentralization of authority, in practice Pope Francis demands adherence to his own policy line, and anyone who voices reservations is treated as an enemy,” Lawler said.

Neither the Vatican nor Cardinal Parolin responded to requests for comment from the DCNF.