Six of the remaining Democratic presidential candidates went head to head on issues of foreign policy, trade, health care, child care, and climate change ahead of the Iowa caucuses in early February, but the standout moment of the night was a brawl between Massachusetts Democratic Sen. Elizabeth Warren and Vermont Independent Sen. Bernie Sanders.

The night kicked off with a comprehensive debate on foreign policy, offering the candidates the opportunity to appeal to voters who are exhausted by, and skeptical of endless wars abroad. The topic was also a weak spot for Biden, who was the only politician who supported the costly and deadly Iraq War in the aftermath of the September 11, 2001 terror attacks.

The other candidates, particularly Sanders and Klobuchar, capitalized on the opportunity to hammer their personal opposition to the war. 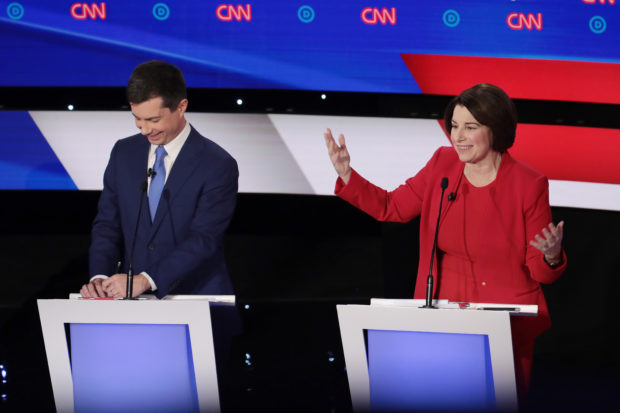 Buttigieg noted that he served with people in the military who were hardly old enough to remember the vote to go to war with Iraq, adding that people who were not even alive on September 11 are now old enough to enlist.

Steyer, in a rare moment where he was able to successfully use his status as a businessman to his advantage, blamed the DC establishment for repeatedly making the same foreign policy mistakes and insisted that “judgment” is more important than “experience” in being commander in chief.

However, the candidates split on how many troops, if any, they would remove from Afghanistan, Iraq, and other middle eastern countries. Warren was the only person on stage who said unequivocally that she would remove all combat troops from the Middle East. (RELATED: Report: US Government Chronically Lied About Trillion Dollar War In Afghanistan)

Biden stepped in a snare again when he knocked President Donald Trump for striking Iranian military general Qasem Soleimani without congressional approval, leading to a rebuke from CNN moderator Wolf Blitzer, who mentioned President Barack Obama’s more than 500 drone strikes during his administration.

The debate soon turned to Trump’s tariffs and his negotiation of the United States-Mexico-Canada (USMCA) trade deal to replace the North American Free Trade Agreement (NAFTA). The USCMA deal passed with bipartisan support in the House and is set for a vote in the Senate, placing extra pressure on Warren, Klobuchar, and Sanders.

Warren and Klobuchar both said that while the deal is not perfect, they support it because it is an improvement upon NAFTA. Sanders, however, said he could not support the USCMA — even after admitting that it has modest improvements — because it does not do enough to address climate change.

Steyer agreed with Sanders that the USMCA does not address climate and therefore he could never vote for it, an apparent flip from his previous position.

“This is a win for our great partners in labor and the American workers who fuel our economy,” Steyer said about the USCMA after Democrats announced they had reached a deal with the president, according to Politico. 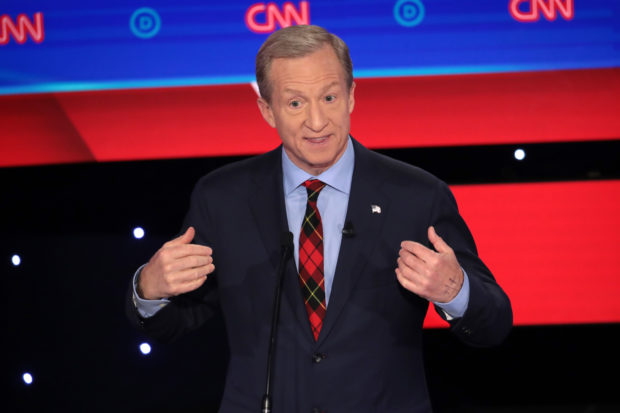 Despite Sanders’ opposition to USCMA, he earned the first applause of the night when he knocked prior trade deals as the product of corporate interests. The jab was directed at Biden, who supported both NAFTA and the “permanent normal trade relations,” or PNTR with China.

“Joe and I have a fundamental disagreement, in case you haven‘t noticed,” Sanders said. “NAFTA, PNTR with China, other trade agreements were written for one reason alone, and that is to increase the profits of large, multi-national corporations.”

Viewers waited halfway through the debate for the fight they were gearing up for: Warren vs. Sanders. The pair clashed this week after secondhand sources claimed to CNN that Sanders told Warren during a private meeting in 2018 that he did not believe a woman could win the presidency.

Sanders has repeatedly denied that he made such a statement, and continued to do so Tuesday.

“Well, as a matter of fact I didn’t say that,” Sanders said.

“How could anybody in a million years not believe that a woman could become president of the United States?” Sanders questioned, adding that there is a video of him in 1988 saying that he believed a woman could win. (Bernie Sanders Denies Warren’s Claim That He Said A Woman Couldn’t Win The Presidency)

In a stunning moment that led many viewers to call out CNN for journalistic malpractice, debate moderator Abby Phillip accepted Warren’s version of events wholesale and asked her how she reacted to Sanders’ alleged comments.

“Senator Warren, what did you think when Senator Sanders told you that a woman could not win the election?” Phillip asked.

Warren stated that she “disagreed” with Sanders and was never asked to state “yes” or “no” if the events occurred as described in CNN’s initial report. 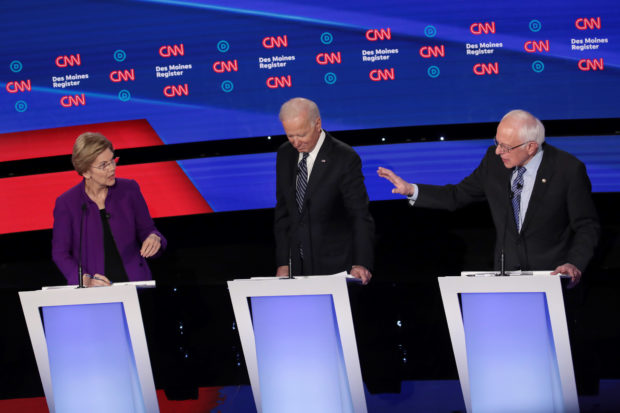 Both candidates used the opportunity to detail their support for women, earning them applause from the audience, and the brawl quickly derailed into pro-diversity statements from each of the candidates.

The debate moderators went on to question the candidates about topics that were well-tread in previous debates, including health care, the impeachment of Trump, and climate change. However, it was a foray into child care policies that lead to a moment of apparent dishonesty from Warren.

The Des Moines Register’s Brianne Pfannenstiel pointed out that Warren supports free college tuition for all families, but imposes an income cap on families who may received free child care under her plan.

Warren suggested the question was inaccurate, responding, “Actually, my plan is universal child care for everyone. It has some people adding a small payment.”

According to a review of Warren’s child care plan by Vox, she does indeed only offer free child care services to families making less than 200% of the federal poverty line. Families making more than that would pay up to 7% of their income for child care.

Toward the end of the debate, Buttigieg was forced to address his abysmal polling with black voters, wherein he claimed that the black voters who know him the best tend to support him.

“The black voters who know me best are supporting me,” Buttigieg responded when asked about his “next to no” black support. “It’s why I have the most support in South Bend, and among elected black officials in my community who have gotten into this race, by far most of them are supporting me.”

Buttigieg also added that he will never “take black votes for granted.”

Biden was able to use the question to slip in a reminder about his own stellar support among black voters.

The debate ended with relatively few standout moments for any of the candidates, as candidates were warned prior that they would lose speaking time if they attempted to interrupt an opponent. Instead, the two hour debate dragged along with scripted questions on oft-covered topics and few live challenges from the moderators.

However, the sparring between Sanders and Warren over allegations of sexism lingered. The two progressives did not shake hands after the debate and appeared to have a terse exchange of words instead. It likely won’t be the last time the two medicare-for-all champions square off, as Sanders surges and Warren slips in the polls. (RELATED: Warren Seemingly Refuses To Shake Bernie’s Hand After Debate)