The dismissal comes at a time when newsroom rules about social media have never been murkier. Last week, The Washington Post suspended reporter Felicia Sonmez after she tweeted a story reminding readers that Kobe Bryant allegedly raped a woman in 2003. The tweet came shortly after the news emerged that the basketball hero had died in a fiery helicopter crash. After a lot of internal outcry, WaPo quickly reinstated her and Executive Editor Marty Baron issued a long missive that didn’t do much to clear up confusion about future shitstorms on social media.

The Washington Examiner employee in question shared the video on Slack, an internal communication medium used by many news outlets.

But it’s never the caboose that crashes the train. Several sources who spoke to The Daily Caller on condition of anonymity say it was not this latest isolated act that got Nicosia canned. The video, while lewd, had already gone viral. And most journalists can handle crass pictures, stories and videos. The previous straws were the various odd and annoying incidents that came before it, including promising people raises without any authority to do so.

Other black marks included allegedly overworking the staff and random disappearing acts. One such act involved an incident in which Nicosia told coworkers and bosses that he got glass in his eye because of an Uber accident. Some of the sources interviewed for this story don’t believe the incident ever happened.

According to multiple sources familiar with the situation, Washington Examiner Editorial Director Hugo Gurdon told Nicosia Friday that his hands were tied and that corporate had made the call to oust him. Sources say he came into the office Friday for the first time all week and sat around watching CNN.

Nicosia did not initially take the sacking well.

In two tweets deleted within hours of posting them, he appeared to threaten the Washington Examiner that he may leak behind-the-scenes conversations with bosses. He highlighted an app called “Just Press Record.” 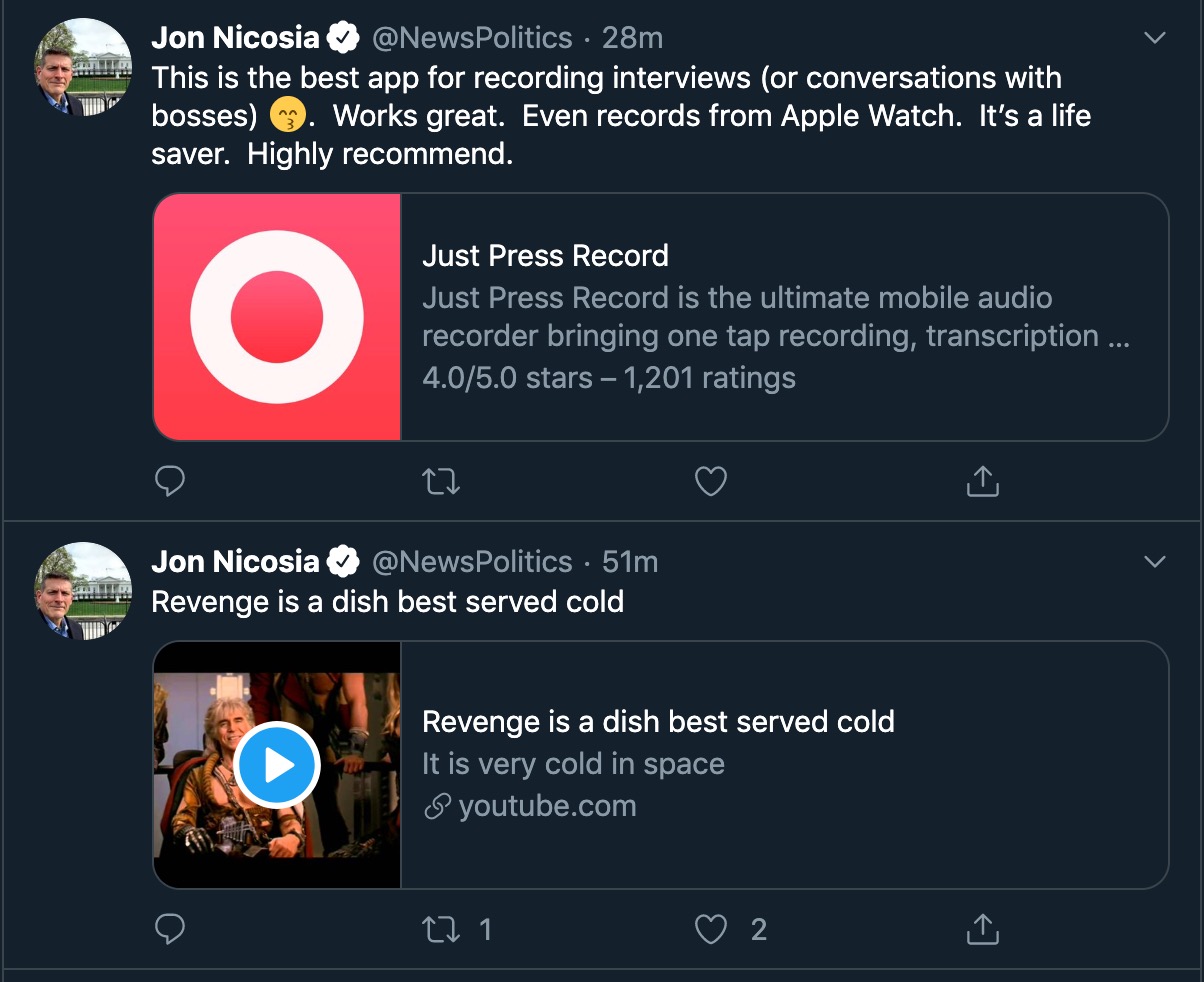 I also called Nicosia and left a message.

Nicosia has a storied history in political media. He worked at Mediaite and Independent Journal Review (IJR) before landing at the Washington Examiner in April 2019. He lasted an admirable seven years at Mediaite and just eight months at IJR. (RELATED: IJR Hired A Con Man — Shockingly He Lasted Less Than A Year)

I spoke to many people who have worked with Nicosia over the years. Most conceded how talented he is at his job and spoke about his tireless work ethic and near surgical ability to cut videos. They also recalled his penchant for lying.

“It’s no surprise a pathological liar can’t seem to keep a job,” a former coworker told me. “But it also says a lot about the extremely low standards of the outlets that hire him.”

Speaking of surgery, Nicosia regularly claimed to be a trauma surgeon and sources told me that he regularly dispensed medical advice to coworkers while working at Mediaite. I’m told no one took his medical advice too seriously — no appendectomies in the bathroom or anything — but he gave it out nonetheless.

“He would definitely claim medical expertise, [but] he didn’t diagnose,” another former coworker assured. “We all knew that he wasn’t who he claimed to be, but he was very good at clipping videos.”

The other thing about Nicosia is his charm and likable personality. Many sources I spoke with talked about how “charming” the guy can be, especially to people he likes. Former and current coworkers spoke of “genuinely liking” him and really feeling “sort of” close to him.

But there was always another side. “He is a very hard worker and very adapt at technology,” one of the former coworkers told me. “He hustles and makes quick and confident decisions and often is very charming and sweet. He is, however, a pathological liar.”

Sources shared that Nicosia often takes credit when it’s not earned. He was described as a “classic underminer of fellow coworkers” and “toxic.”

In January 2014, Mediaite allowed him to out himself as an ex-con. The piece was emotional, candid and appeared to be an attempt to quash stories published mere days later in The Awl and Politico.

In The Awl, Choire Sicha reported about a 2006 court case in which Nicosia (i.e. Hildreth) testified against an ex-boyfriend who had allegedly attacked him with a shard of glass. It’s a love story for the ages: Nicosia’s lawyers portrayed the ex-boyfriend as “a crazy drug addict who believed in aliens.” But the boyfriend countered that it was Hildreth who “talked of aliens from space, at one point claiming to be one.” The boyfriend, an actual physician, was found not guilty.

Politico’s story dove far deeper than the first-person confessional that appeared in Mediaite. Sources told Peter Sterne that Nicosia had lied about why he could not work at the office, saying he was a busy trauma surgeon in Washington, D.C. or Massachusetts.

I’m told Mediaite founder and publisher Dan Abrams was a big Nicosia fan and gave him a leniency not necessarily afforded to others. He didn’t show up much, but he worked around the clock, which is why editors tend to adore him.

Nicosia’s essay for Mediaite was nothing short of amazing.

My given name is Zachary Hildreth, but most people in the media world know me as Jon Nicosia. I am currently the managing editor of Mediaite.com. I am also a convicted felon.

He covered his own rap sheet, which includes larceny, bank fraud and ultimately five years in prison for crimes he committed to keep his company, Massdata, from tanking.

After he was released, he committed more larceny and securities fraud.

In 2002, he pleaded guilty and spent three more years in prison.

He wrote about his love for the news business and how his Mediaite job helped “transform his life.”

I would like a long future in this business, so it’s time for me to come clean so I can be judged accordingly. …I hope that those of you who have come to know me over the years as “Jon” will understand the decisions I made about my past — and judge me for the person I am today. My name is Zachary Hildreth. I am an ex-con, but please call me Jon.

The AP, The Boston Globe and The AWL all reported unsuccessful alleged suicide attempts by Nicosia and his mother as the result of his crimes and creditors coming after his business assets.

No one I spoke with for this story was surprised that Nicosia was out at the Washington Examiner.

What perplexed them most was that the news outlet had hired him in the first place.