Hogan criticized both the Democrat-led House and Republican-led Senate during Politico’s 10th annual State Solutions conference Friday morning, according to Politico. After coming out in support of an impeachment inquiry in October, Hogan said he is now dissatisfied with what he believes became an overly partisan process.

Hogan said that although he did support an impeachment inquiry, he had little hope that it would lead to a fair and objective trial, saying, “I didn’t think that was possible in this environment — in the middle of an election year.”

“Most people in America after three years are kind of sick and tired of hearing about it,” he said. “And I don’t think Congress did their job. But the American people will, and I have more faith in the American people to make that decision in November, and that’s what they’re going to get to do.” (RELATED: Maryland Governor Fills Posts At Gun Permit Review Board Months After Lawmakers Moved To Dissolve It) 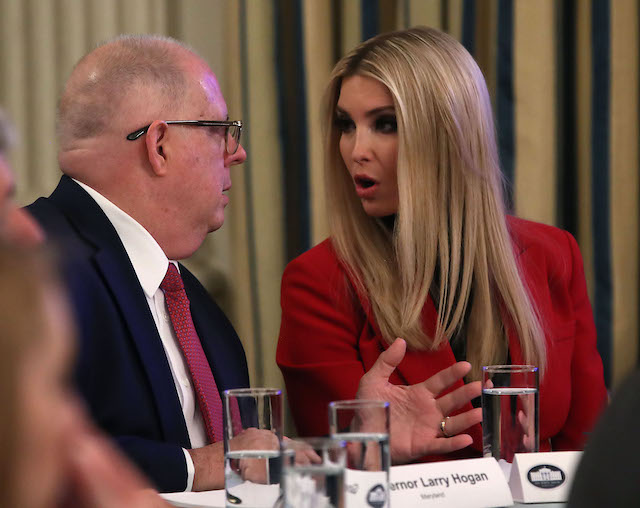 Maryland Governor Larry Hogan speaks with Ivanka Trump during the 2019 White House Business Session with the Nation‚Äôs Governors, in State Dining Room at the White House on February 25, 2019 in Washington, DC. (Photo by Mark Wilson/Getty Images)

Hogan’s father, Republican Maryland Rep. Lawrence Hogan, is remembered as being the only member of the GOP on the Judiciary Committee to vote for all three articles of impeachment against President Richard Nixon. The governor said his father’s decision was a result of his push for a fair trial.

“He also was the only guy fighting for a fair and objective hearing,” he said. “He was fighting to make sure the president had the right to call witnesses and to cross-examine witnesses and to provide a defense.”

As a Republican in a deep-blue state, Hogan is currently the second most popular governor in the country, according to Morning Consult. In 2018, Hogan became the second Republican governor in history to be re-elected in Maryland, winning by double-digits. Hillary Clinton won 60% of the Maryland vote in the 2016 presidential election.