After a gunman on Sunday attacked a New York Police Department station, an NYPD union is blaming violence against law enforcement on Mayor Bill de Blasio.

A gunman walked into an NYPD station house in the Bronx early Sunday and began firing at officers, injuring a lieutenant inside. The alleged shooter eventually lay down and was apprehended after he ran out of bullets. De Blasio — who has famously clashed with the city’s police force during his tenure in office — took heavy criticism from New York City’s Sergeants Benevolent Association (SBA) following the shooting.

The SBA not only said they didn’t have respect for the mayor, but they also asked that he not visit their members at the hospital and told him NYPD cops have been assassinated because of him.

“Mayor DeBlasio, the members of the NYPD are declaring war on you! We do not respect you, DO NOT visit us in hospitals. You sold the NYPD to the vile creatures, the 1% who hate cops but vote for you. NYPD cops have been assassinated because of you. This isn’t over, Game on!” read a Sunday tweet from the SBA. 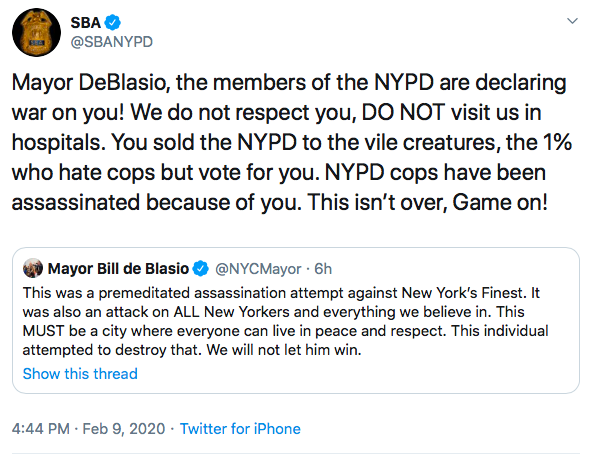 At around 8 a.m. Sunday, alleged shooter Robert Williams ran into the 41st Precinct station house and began to open fire, according to video obtained by the New York Post. Williams allegedly fired multiple rounds inside the building and then lied down on the ground — not because he had a change of heart, but because he simply ran out of bullets, according to a spokesman.

“He immediately pulls out a gun and fires multiple rounds towards the desk area,” department commissioner Dermot Shea said in a Sunday statement. “He then walks into an area beside that desk and fires several rounds.”

“I will point out that this coward immediately lay down, but only after he ran out of bullets,” Shea continued.

Williams was taken into custody after surrendering to police and transported to a nearby hospital for injuries he sustained in the ambush. During the shooting, Lt. Jose Gautreaux was hit in the left arm, but he is expected to make a full recovery. (RELATED: ‘Her Death Is On YOU’: Police Union Blames NYC Mayor de Blasio’s Sanctuary Policy For Homicide)

This is far from the first time the SBA has publicly lambasted the mayor. In an interview with the Daily Caller News Foundation in January, SBA vice president Vincent Vallelong said his union was “fed up” with de Blasio’s “sanctuary city” policies that prohibit his members from cooperating with federal immigration authorities.

Vallelong said the mayor was basically “handcuffing police” when it came to taking criminal illegal aliens off the streets.

Update: The mayor’s office provided the following comment on Monday:

“Ed Mullins’ [the SBA president] comments are absolutely reprehensible. He clearly has forgotten his oath to protect and serve. While he threatens violence, the mayor remains focused on the safety of our officers and communities,” said Freddi Goldstein, a spokeswoman for de Blasio.