“I do understand power, whatever else may be said about me. I know where to look for it, and how to use it. … I’m just like a fox. I can see the jugular in any man and go for it, but I always keep myself in rein. I keep myself on a leash, just like you would an animal.”

So remarked then-Senate Majority Leader Lyndon B. Johnson. LBJ served in the Senate from his election in 1948 until his election as John F. Kennedy’s vice president in 1960. A mere four years into his first Senate term, Johnson was elected Senate minority leader for the Democrats, becoming majority leader in 1955 after a single Senate term.

As Johnson biographer Robert Caro noted in his Pulitzer Prize-winning book on Johnson’s Senate years, “Master of the Senate,” both the position of Senate majority leader, not to mention the institution of the Senate itself, was at a low ebb when Johnson won the job. Caro writes:

When he arrived in the Senate, that institution had for decades been almost a joke — an object of ridicule to cartoonists and comedians, of frustration and despair to historians and political scientists. Hamstrung by archaic rules and customs which it was determined to keep unchanged, it seemed hopelessly unable to adapt to the new needs of a modern, more complex world, and its rigid adherence to a seniority system thoroughly drained it of energy and vitality and initiative while keeping in some of its most influential positions men so elderly that wags called it the ‘senility system.’ 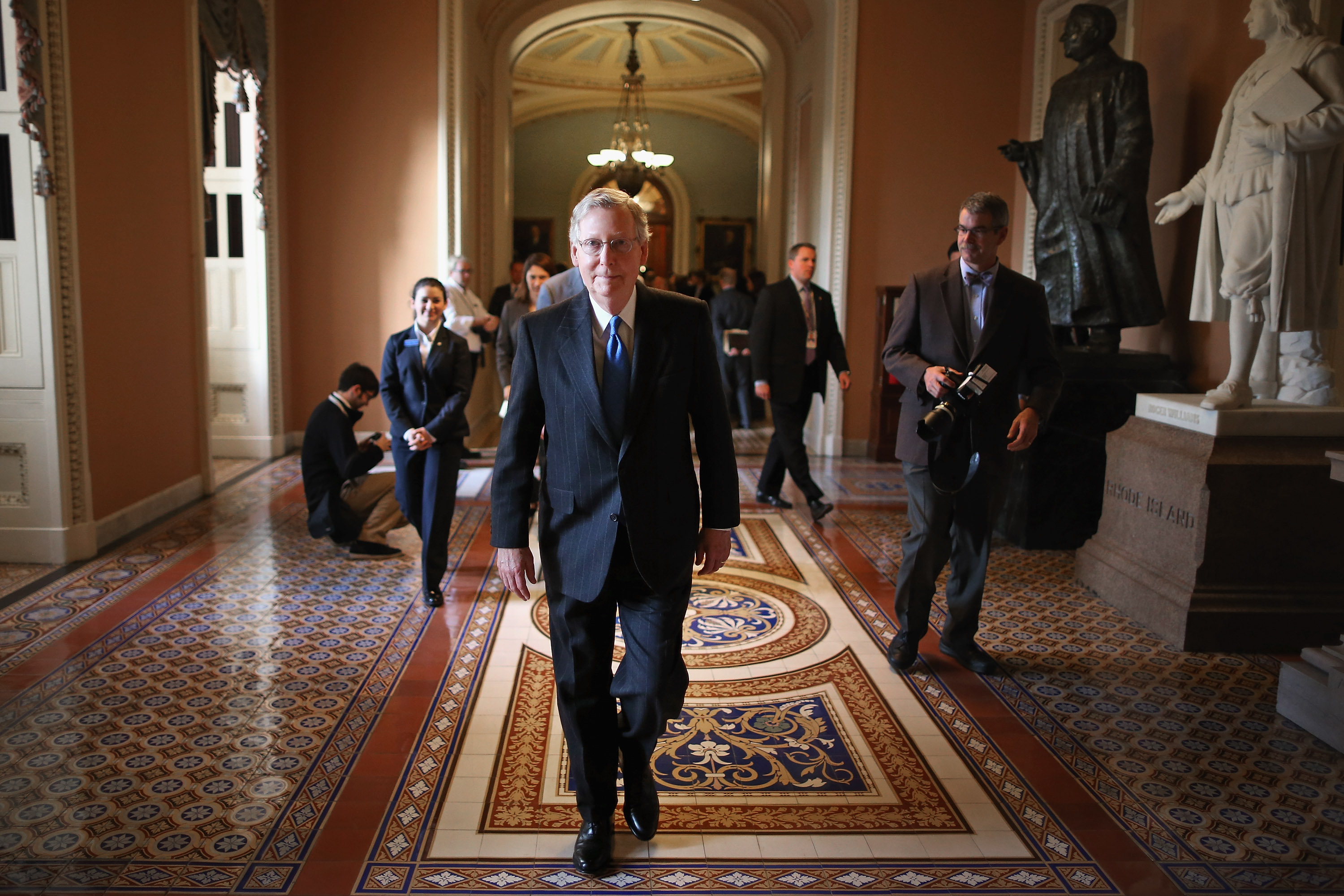 Senate Minority Leader Mitch McConnell (R-KY) walks back to his office after talking to reporters at the U.S. Capitol December 11, 2012 in Washington, DC. (Photo by Chip Somodevilla/Getty Images)

No one would confuse the personal style of the colorful, garrulous, Texas showman that was Senate Majority Leader Johnson with the quiet, courtly reserve of the Kentucky Republican who now holds LBJ’s old job. But as the impeachment showdown has just illustrated in spades, without doubt Senate Majority Leader Mitch McConnell is indeed, as was LBJ, the Master of the Senate. (RELATED: Mitch McConnell: Adam Schiff’s Impeachment Timeline Is ‘Antithetical To American Justice’)

Look no further than this post-impeachment assessment of McConnell’s role as Leader from the decidedly anti-Trump, anti-Republican New York Times. The headline: “How Mitch McConnell Delivered Acquittal for Trump.”

The Times report says, in part, this:

The story of how Mr. McConnell held Republicans together — even in the face of stunning revelations about the president’s conduct and uneasiness in his party about Mr. Trump’s actions — reflects how a master Senate tactician deployed his command of procedure and keen political instincts to lock down a process that posed an existential threat to the president. In doing so, he may have cemented the president’s hold on his office and provided a defiant campaign message to propel him to re-election, uniting the party around a figure who brooks no dissent and dealing a death blow to Democrats’ hopes of removing him.

McConnell, in his sixth term and the longest Senate Republican leader in history, had spent a year preparing for a potential Senate trial. Said The Times:

Mr. McConnell set out to create the framework for a trial that his members could get behind, that could withstand the possibility of compromising new information emerging and that would deliver the White House a quick but credible verdict of “not guilty.” It went far from perfectly for Republicans — among other setbacks, Senator Mitt Romney, Republican of Utah, voted “guilty” on the charge of abuse of power, depriving Mr. Trump of the absolute party loyalty he coveted — but Mr. McConnell reached his desired end.

‘He is very good at what he does,’ said Senator John Cornyn, Republican of Texas and a close ally of Mr. McConnell.

McConnell is indeed “very good at what he does.” (RELATED: Mitch McConnell Agrees With Pelosi’s ‘Grim Reaper’ Nickname)

In early November 2019, the president greeted visitors in the Oval Office for an hour’s worth of discussion about the events of the moment, impeachment included. In the middle of the discussion, as the subject moved to the Senate, the president called for an aide to bring him a pile of documents that he had just signed. In fact the pile, which was considerable, was a stack of official certificates bearing his newly affixed signature testifying that the recipient had now been appointed and confirmed by the Senate as a federal judge. The president was pleased, and has since boasted some more as he has signed even more such documents, the total nearing the 200 mark.

The reason, of course, is that Senate Leader McConnell has seen to it that the Senate has confirmed a veritable cascade of Trump appointees to the federal bench. The Washington Post, doubtless unhappily, headlined the story this way: “1 in every 4 circuit court judges is now a Trump appointee.”

After three years in office, President Trump has remade the federal judiciary, ensuring a conservative tilt for decades and cementing his legacy no matter the outcome of November’s election.

Trump nominees make up 1 in 4 U.S. circuit court judges. Two of his picks sit on the Supreme Court. And this past week, as the House voted to impeach the president, the Republican-led Senate confirmed an additional 13 district court judges.

In total, Trump has installed 187 judges to the federal bench.

Trump’s mark on the judiciary is already having far-reaching effects on legislation and liberal priorities. Just last week, the 5th Circuit struck down a core provision of the Affordable Care Act. One of the two appellate judges who ruled against the landmark law was a Trump appointee. 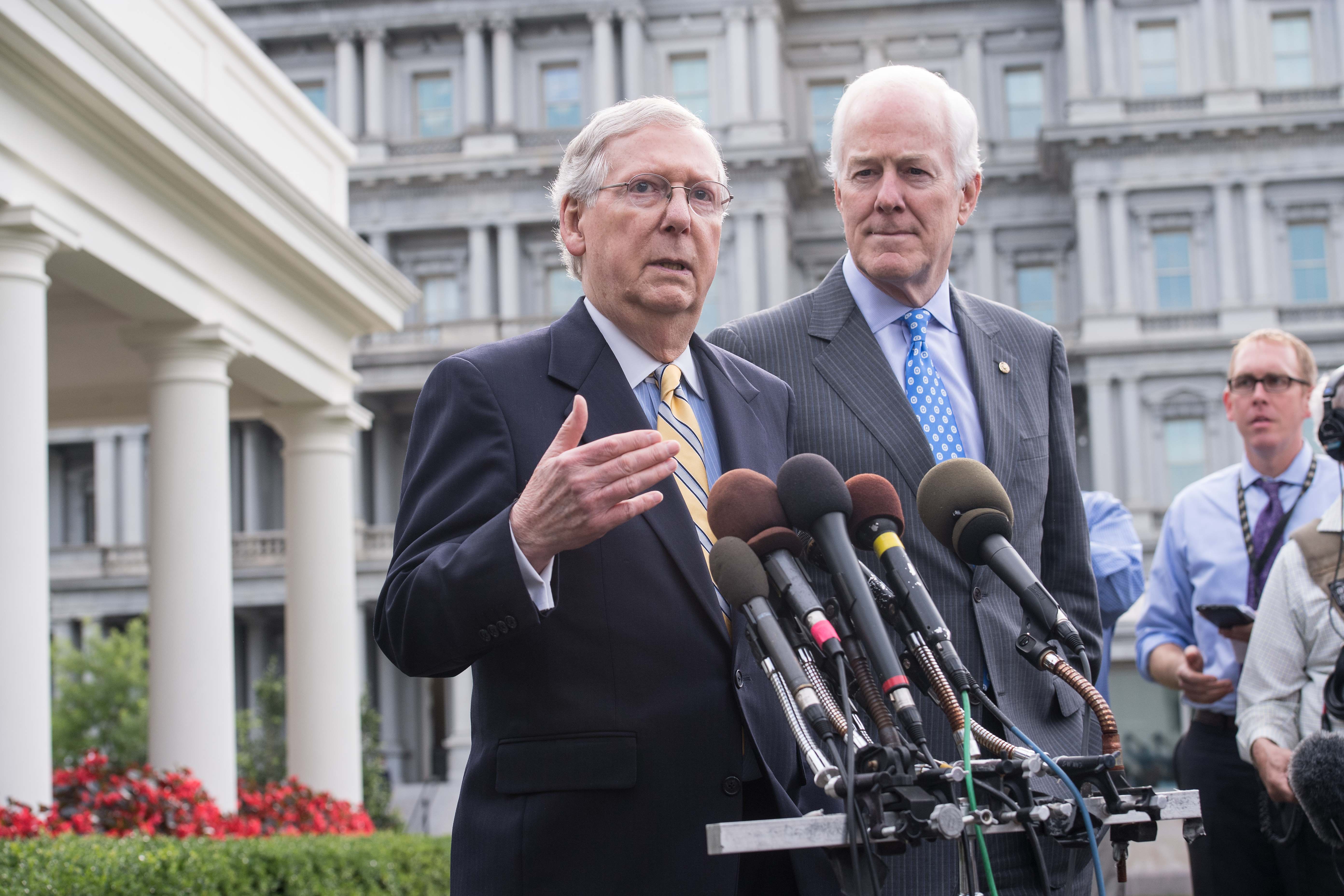 US Senate Majority Leader Mitch McConnell (L) and Majority Whip John Cornyn speak to the press outside the West Wing of the White House after Republican senators met with US President Donald Trump to discuss the healthcare bill in Washington, DC, on June 27, 2017. (NICHOLAS KAMM/AFP via Getty Images)

Not least in all of this was McConnell successfully steering the nomination of Trump Supreme Court through a circus of a Senate confirmation to final approval.

Without question, as the president is the first to recognize, all of this has been made possible because of McConnell’s mastery of the Senate. Says McConnell, according to The Times:

What I have consistently said to him is I think I know more about the Senate than you do, which he usually concedes.

Indeed, McConnell does know more about the Senate than not only the President but many of his colleagues — on both sides of the aisle — as well.

Absolutely every bit of that institutional knowledge was put to use by McConnell in the impeachment fight. Whether it was the reality of Senate rules and parliamentary procedure or immersing his Republican members in the details of Senate procedure during the Clinton impeachment trial, there was no detail too small, no precedent unexamined, no bit of politics left unanticipated. In the latter category, he made sure to warn GOP Senators up for reelection that Senate Minority Leader Chuck Schumer was going to try and make them take hard votes that could damage their reelection prospects. (RELATED: Protesters Gather Outside Mitch McConnell’s Home. One Calls For Senator To Break His Neck) 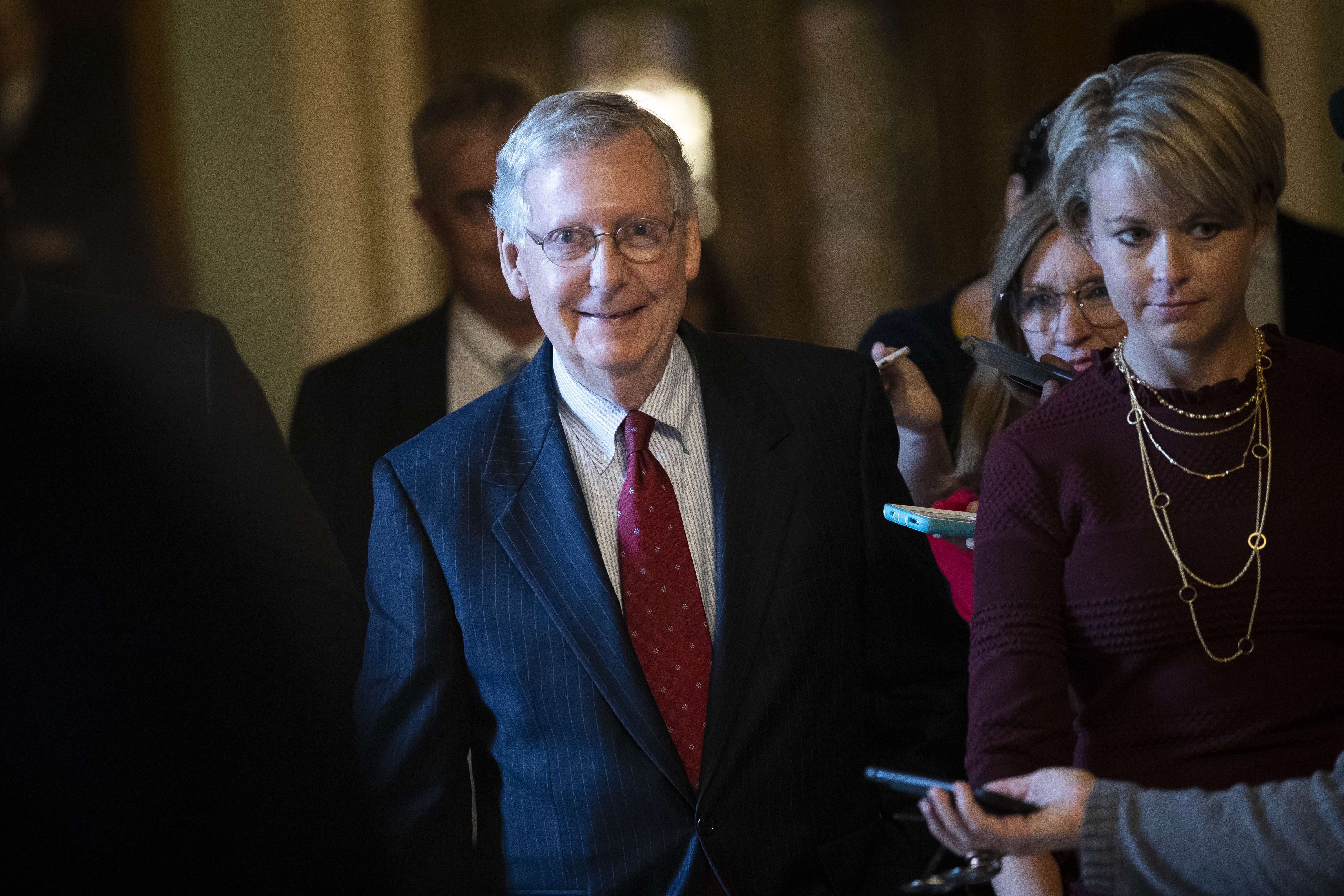 Senate Majority Leader Mitch McConnell (R-KY) leaves the Senate floor and heads to his office on Capitol Hill, September 24, 2018 in Washington, DC. Christine Blasey Ford, who has accused Kavanaugh of sexual assault, has agreed to testify before the Senate Judiciary Committee on Thursday. (Photo by Drew Angerer/Getty Images)

When Schumer launched a move to have Democrats in his caucus who had friends in the GOP caucus send out offerings of bipartisanship, McConnell held his caucus together — the offerings rejected.

The day after the Senate acquittal, Mitch McConnell was front and center in the White House East Room as the president, his family, his lawyers and supporters in the Senate and House gathered to celebrate. Trump singled out McConnell, who was greeted with a thunderous standing ovation for his performance.

McConnell has emerged from this impeachment trial not simply as first among equals in the Senate, with immense power at his fingertips.

Without question, as LBJ demonstrated so long ago, it is the knowledge of how to use that power that makes for a great Senate majority leader. And it is precisely the mastery of that knowledge that has now made the quiet, courtly McConnell of Kentucky the Master of the Senate.

Jeffrey Lord, a former CNN contributor, is a columnist and author. He is a former associate political director in the Reagan White House. In his Washington career, he has served successively as a senior aide for a U.S. congressman and a U.S. senator, chief of staff for former Reagan cabinet member Drew Lewis in the 1984 Reagan-Bush campaign, and as an aide to HUD Secretary Jack Kemp. He writes at his website, TheJeffreyLord.com.