Restaurant owners are taking action against food delivery apps that have their eateries listed on the platforms without their permission.

Grubhub, one of the most popular mobile food ordering services, is being sued for allegedly placing restaurants and their respective menus on its app without the owners knowing. It’s also being sued for allegedly charging restaurant owners for phone calls made through the phone number listed on their app. (RELATED: 4.9 Million People Affected By DoorDash Data Breach)

“Ordering online does more damage to businesses than it helps,” reads a sign, according to Eater, after their closing. “Any profit from sale is stripped away by the fees they charge the restaurant, which leaves only enough to cover the cost of food.”

Grubhub responded to a Daily Caller inquiry regarding the company listing restaurants without formal agreements. 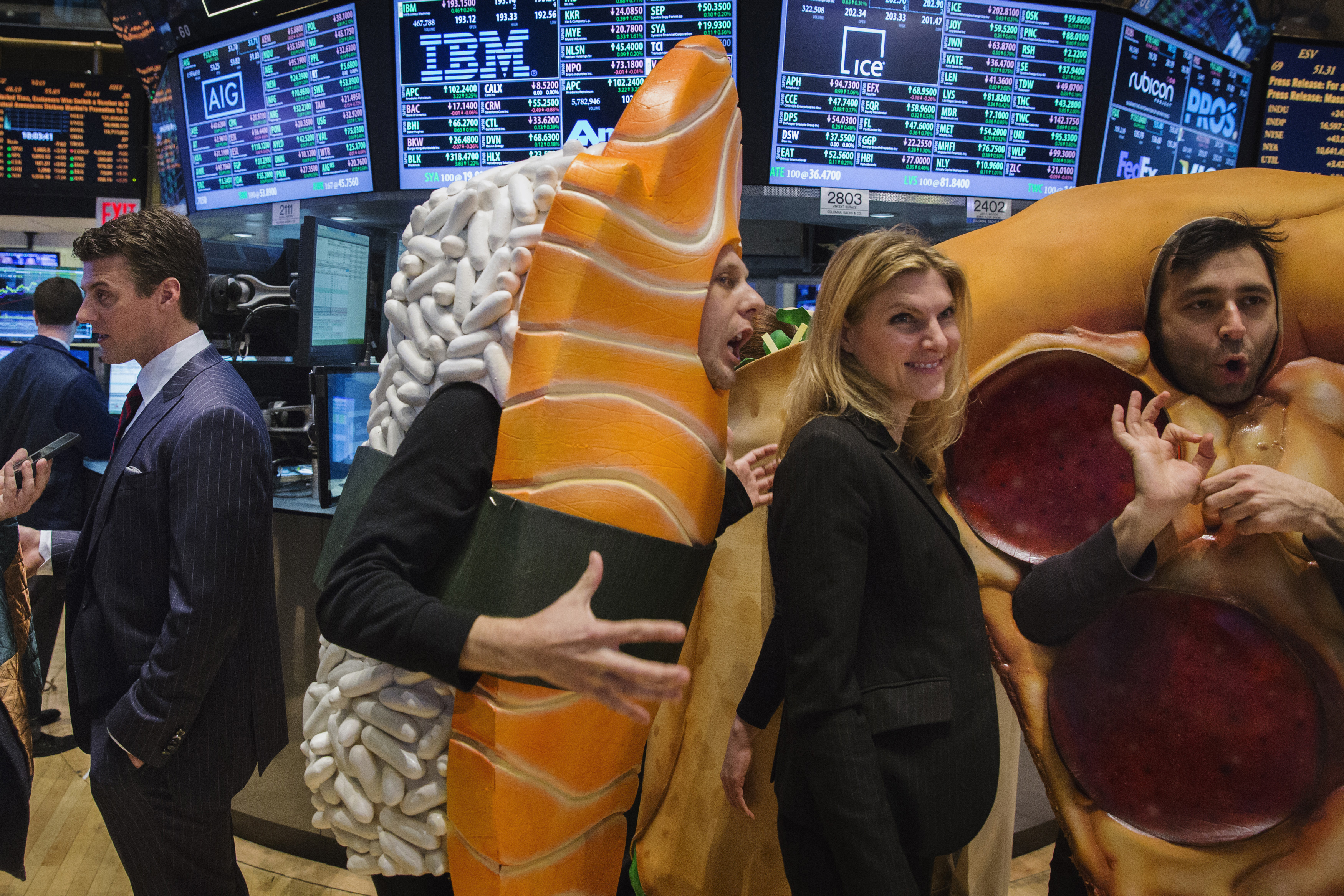 Chief executive officer of GrubHub, Matt Maloney (L), takes part in an interview after the company’s IPO on the floor of the New York Stock Exchange in New York April 4, 2014. Shares of GrubHub Inc, the biggest U.S. online food-delivery service, rose as much as 57 percent in its market debut as investors scrambled for a piece of the fast-growing consumer internet company. (REUTERS/Lucas Jackson)

Several restaurant owners have joined a lawsuit against Grubhub alleging that the food delivery app is charging restaurants up to hundreds of dollars per month, according to Eater.

When restaurants join the Grubhub delivery service, the company sets them up with their own Point of Sale (POS) system and their own phone number, which reroutes to the restaurants’ real phone number. So when a customer calls the restaurant using the phone number on the app, Grubhub uses an algorithm to determine whether or not the phone call is about an order, Eater reports.

Restaurant owners allege in the lawsuit that they are charged $9 per call that are not about orders.

“Diners primarily call the restaurants to check on the status of their delivery orders or to ask questions about the menu,” the lawsuit argues, per Eater.

The Grubhub spokeswoman did not address any current lawsuits, but did mention a new strategy enacted to address “diner demand.”

“Starting in late 2019 in select cities across the country, we’ll add restaurants to our marketplace when we see local diner demand for delivery so the restaurant can receive more orders and revenue from deliveries completed by our drivers,” the Grubhub spokeswoman told the Caller. “We work to provide accurate menus and hours for these restaurants on our marketplace based on available information online.”

Grubhub also owns Seamless, Eat24, MenuPages and AllMenus. Their new strategy, according to the Verge, seems to further the problem some restaurants have with these food delivery apps that add their business to their platform without a formal agreement. (RELATED: Uber, Lyft Prepared To Spend $90 Million Against Bill That Would Give Benefits To Drivers) 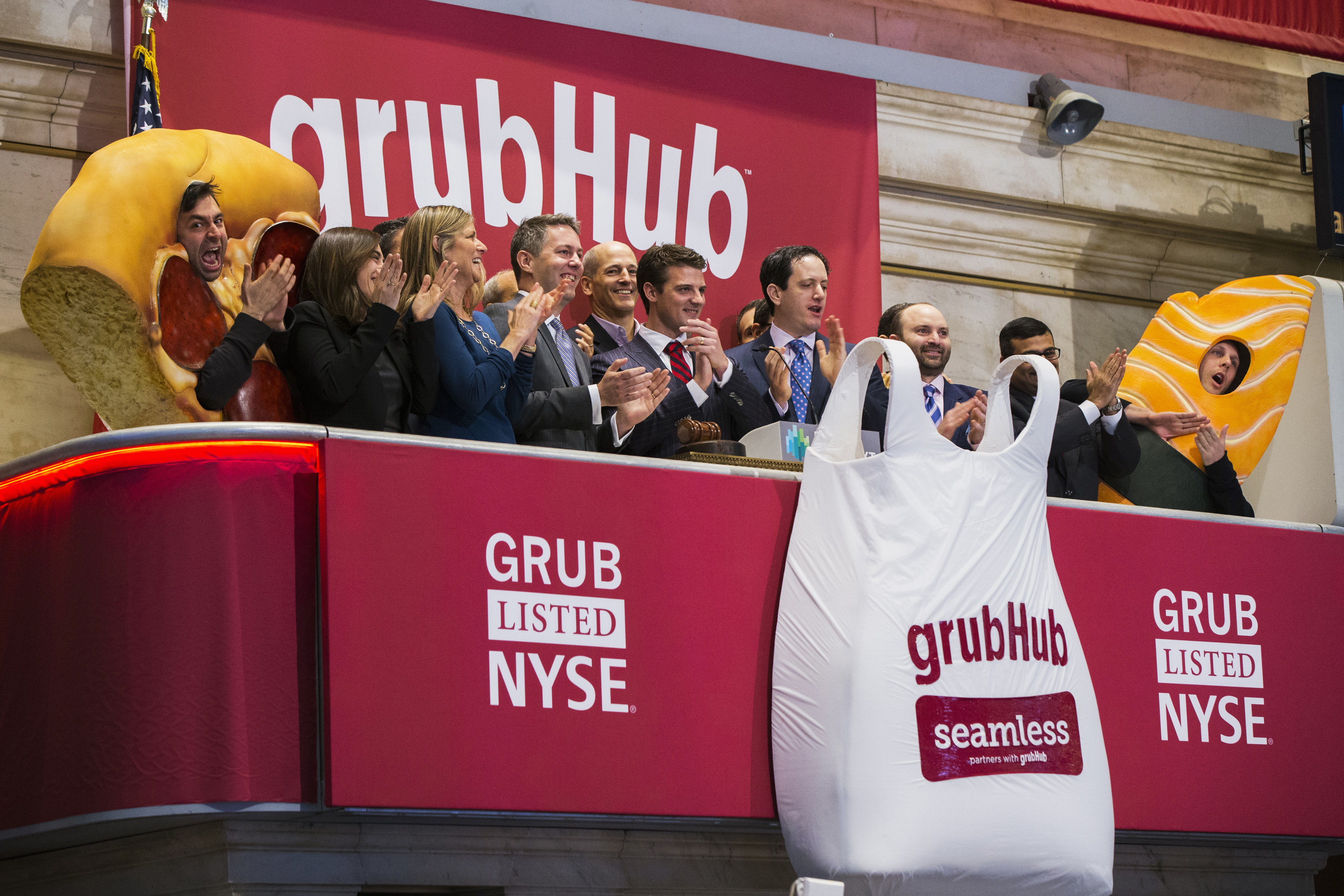 GrubHub CEO Matt Maloney (C) applauds after ringing the opening bell before the company’s IPO on the floor of the New York Stock Exchange in New York April 4, 2014. Shares of GrubHub Inc, the biggest U.S. online food-delivery service, rose as much as 57 percent in its market debut as investors scrambled for a piece of the fast-growing consumer internet company. REUTERS/Lucas Jackson (UNITED STATES – Tags: BUSINESS FOOD)

Grubhub has also reportedly created fake websites to resemble restaurant or business landing pages, per the Verge. These domains use similar URLs but change little things, for example, like “.com” to “.net.”

The owners of two small restaurants in Brooklyn and Queens signed up for Grubhub several years ago because the idea of a delivery service that provides its own online presence sounded promising, The Counter reported.

However, the owners noticed their profits started to fall, and when the owners looked at their statements, they realized it was due to Grubhub’s costs. (RELATED: What We Learned From Uber Making Its IPO Filing Public)

The statements reviewed by the Counter revealed that they were charged $8,000 by Grubhub in one month. As the owners began to look into other options and tried to promote a stronger online presence, they found Grubhub had created a domain that matched the restaurant name.

“The @newfoodeconomy has found that @Grubhub owns more than 23,000 web domains. Its subsidiary, Seamless, owns thousands.”

Love & Honey Fried Chicken, a Philadelphia-based restaurant, says its a victim of Grubhub’s practice. In an Instagram post, the restaurant shows a screenshot of a tweet from Grubhub attempting to reach out and help them.

“It’s our aim to bring the best delivery experience possible while balancing the interests of our diners, restaurants and drivers, and complying with all local laws and regulations in connection with our business,” the representative for the company said in regards to placing restaurants on their app without formal agreements.

“If a restaurant prefers not to be on our marketplace or needs to change any information like menu items or hours, they should reach out to us at restaurants@grubhub.com, and we’ll work as quickly as possible to make necessary updates or remove them.”

@grubhub you don’t know who you are dealing with.

“Grubhub took it upon themselves to add us to their platform without approval. We have been trying to get our menu (which is outdated) removed. We have an exclusive partnership with the awesome folks at @Caviar,” the restaurant tweeted in regards to their issues with Grubhub.

Hey guys! Just an FYI: we are NOT on @Grubhub. GrubHub took it upon themselves to add us to their platform without approval. We have been trying to get our menu (which is outdated) removed. We have an exclusive partnership with the awesome folks at @Caviar. ❤️????????#fugrubhub

The screenshot shows a reply from the restaurant saying that a “cease and desist is on the way,” and that it has reached out numerous times with little to no help or response.

The Grubhub spokeswoman continued to the Caller:

Pim Techamuanvivit, the owner of a Thai restaurant in San Fransisco, California, recently received a call from a patron inquiring about a delivery order through Seamless.

Techamuanvivit was surprised by the phone call because she had not been made aware that her restaurant Kin Khao was listed on Seamless. The restaurant does not provide delivery services, it doesn’t even provide takeout.

I managed the floor @kinkhao tonight, at 8.30pm I answered the phone, someone called to ask about their delivery order that was placed 45 minutes ago. Perplexed, I told him we didn’t do delivery, not even take-out. He said what were you doing on @seamless then?

“If you want to hear another story about how @seamless @grubhub, and  @yelp are defrauding us restaurants and their customers, pull up a chair. I have a story to tell,” the owner tweeted.
Techamuanvivit also went on to share that she’d be contacting a lawyer, and that Seamless was not the only source. Grubhub also listed Kin Khao as a restaurant on their app, without the knowledge of the owner.  (RELATED: Uber, Lyft Workers Expected To Win Benefits Battle In California)

Don’t worry, my very first call come Monday is to my lawyer. We are suing their arses. I, of course, got a copy of the order from the customer who called us (he kindly sent it to me) as proof. If you’ve made an order or got fake @KinKhao food via @Seamless, @Grubhub, or @Yelp..

Grubhub removed the listing of Kin Khao after Techamuanvivit expressed what had happened on Twitter, but it said the only reason the restaurant was added was because of its “high demand,” according to the Verge.

Postmates similarly adds restaurants and their menus without a formal agreement to their app, and some do not offer delivery at all, the Verge reports. (RELATED: Superstar Lizzo Apologizes After Getting Slammed For Putting Postmates Driver ‘On Blast’)

Unlike the other platforms, Postmates says that explicit partnerships are technically not necessary.

Postmates is also unique because it lists stores in addition to restaurants. The service will shuttle anything from a store to a patron’s door, but again, it does not always have permission from stores.

1
The Coronavirus Pandemic Is Not Stopping Border Wall Construction
US
2
Senior Intel Officials Erupt Over Adam Schiff's Letter To Director Richard Grenell, Pressing Him Over ODNI Personnel Changes
Politics
3
'Give Me The Price': Trump Ignores Journalist For Not Knowing Oil Costs
US
4
Chicago Mayor Urges Citizens To 'Stay Home, Save Lives' — Until She Needs A Haircut
Politics
5
WATCH: ABC’s Jon Karl Salutes Fauci — Fauci Fires Back With Finger Guns
Politics