Turkey has announced that it may soon drive pro-Assad forces out of northwestern Syria, a move that could put it on a collision course with Russia, a close ally of Damascus.

“We will not take a smallest step back in Idlib, we will certainly push the (Syrian) regime outside the borders we designated, and ensure the return of the people to their homes,” Erdogan said, according to Agence France-Presse.

The Turkish president had made a similar threat earlier in February when he warned that unless Syrian government forces withdrew from Idlib before the end of the month, it would be “only a matter time” before Turkey launched a full-scale military operation into the province.

“We are entering the last days for the (Syrian) regime to stop its hostility in Idlib. We are making our final warnings,” he said. 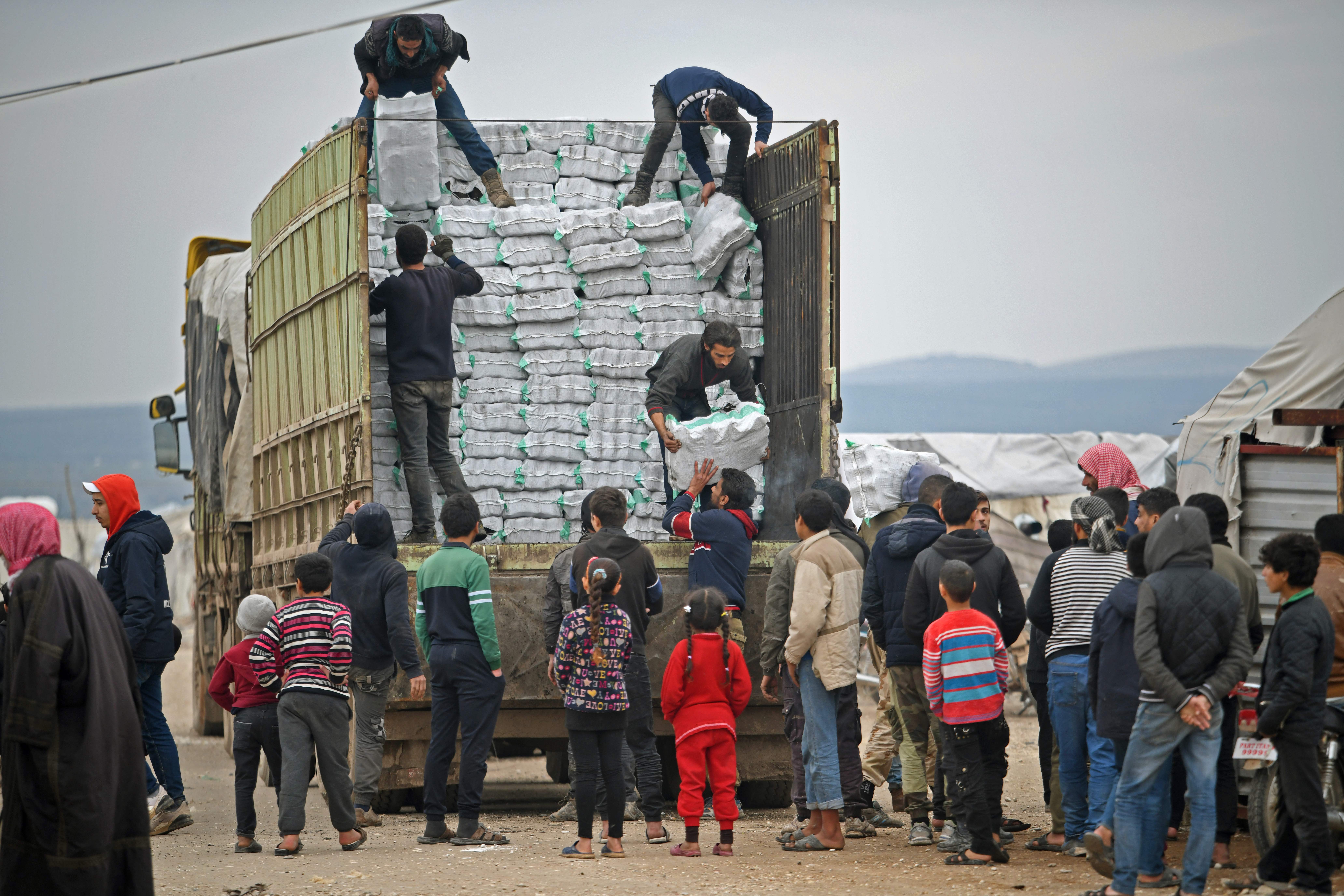 Displaced Syrians queue to receive humanitarian aid, consisting of heating material and drinking water, at a camp in the town of Mehmediye, near the town of Deir al-Ballut along the border with Turkey, on February 21, 2020. (Photo by RAMI AL SAYED/AFP via Getty Images) 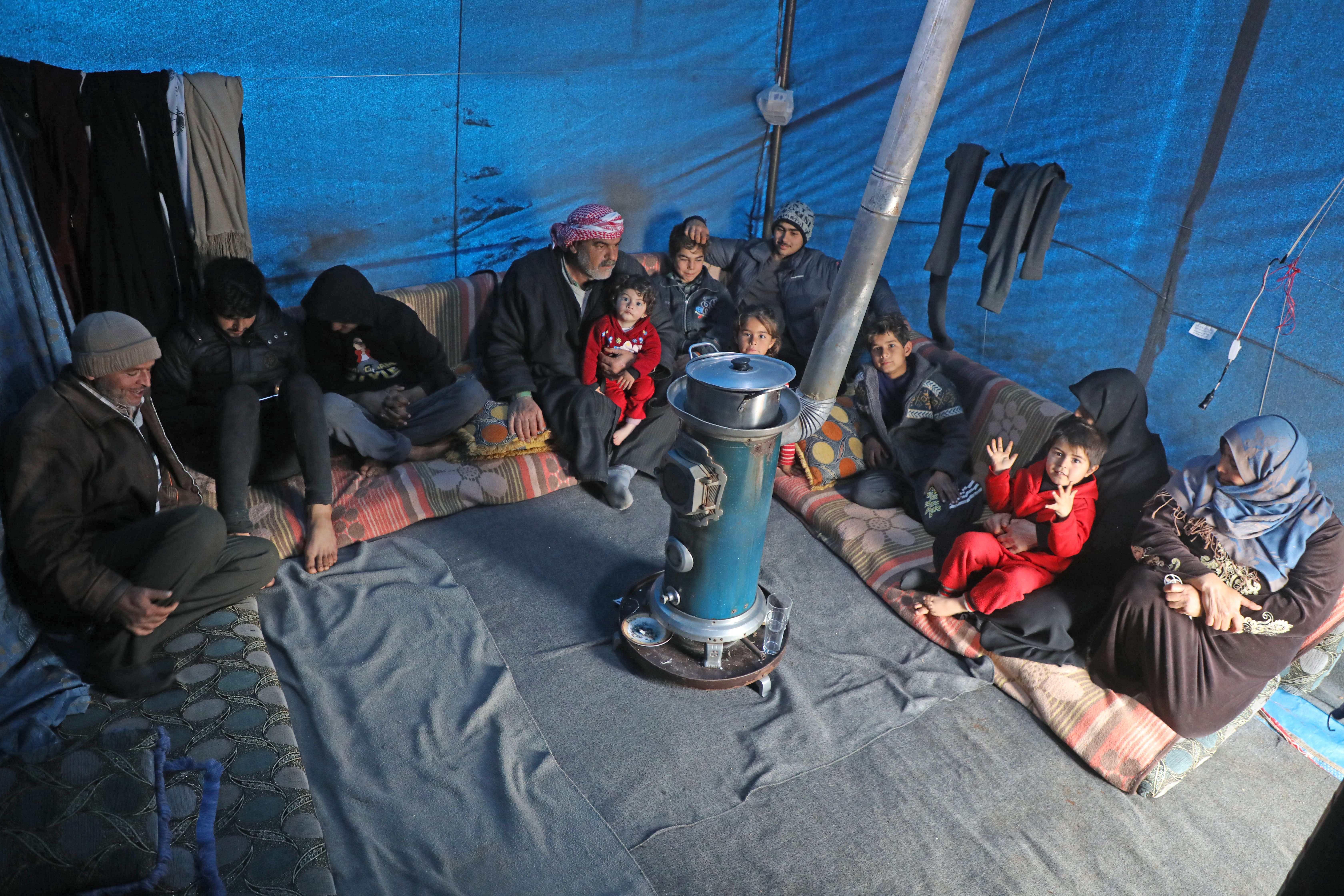 Syrian Abdel Razzak Sallat sit with his family inside a tent at an informal camp for the displaced in Kafr Lusin village on the border with Turkey in Syria’s northwestern province of Idlib, on February 21, 2020. (Photo by AAREF WATAD/AFP via Getty Images)

Erdogan’s remarks come at a time of rapidly escalating tensions between Ankara and Damascus. Turkish and Syrian troops have clashed in Idlib several times in February, resulting in the deaths of 16 Turkish soldiers and an unknown number of Syrian troops. In an air strike Feb. 20, two Turkish soldiers may have been killed not by Syrian planes, but by Russian bombers.

The growing violence in Idlib has prompted Turkey to bolster its military presence in the region. Over a few weeks in February so far, Ankara has sent thousands of soldiers and military vehicles to Idlib. A source within the Syrian opposition told Reuters that Turkey has amassed 15,000 troops in the province. 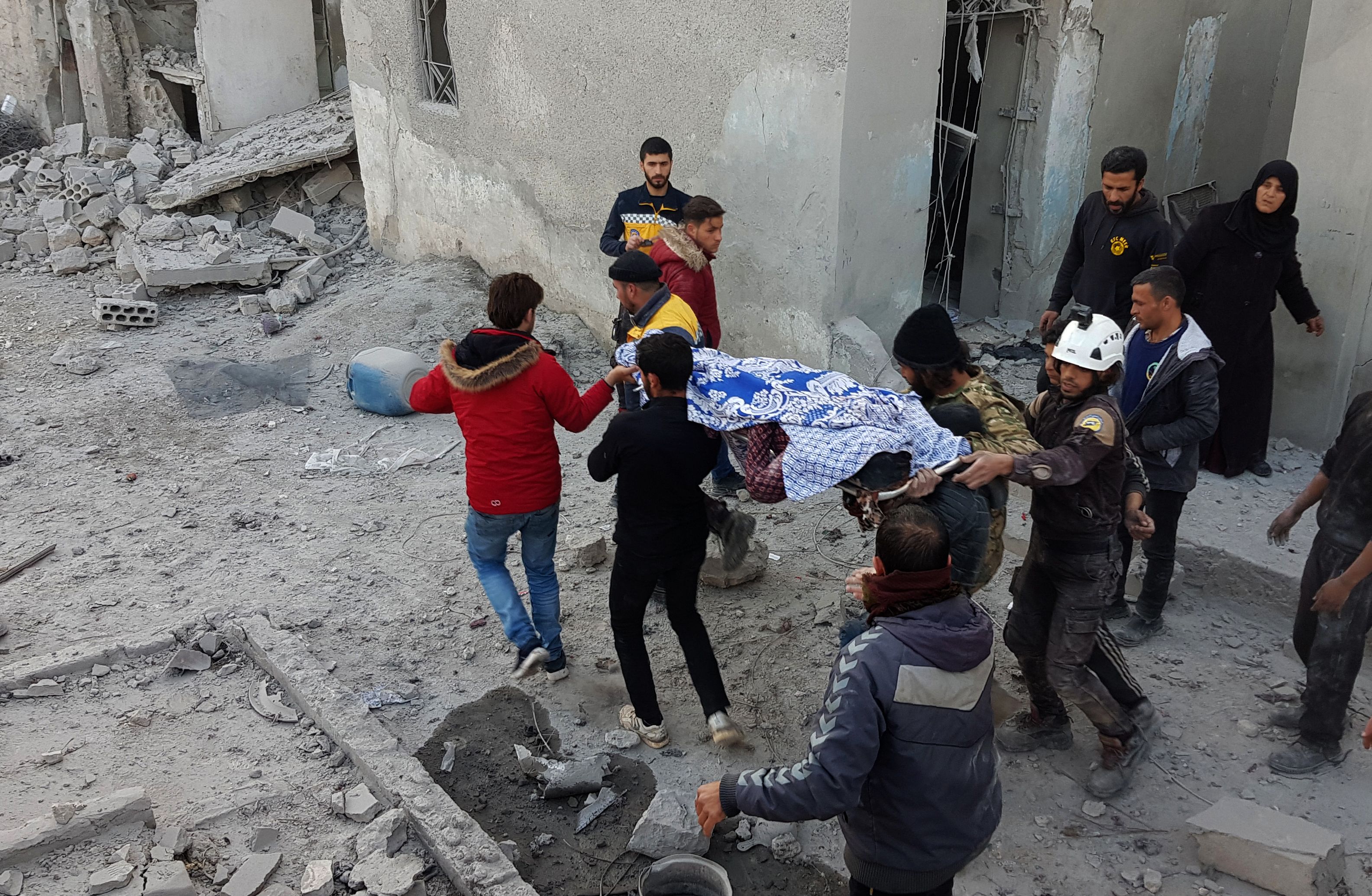 Civilians and rescuers carry the body of a victim following pro-regime forces air strikes in the town of Binnish in Syrias northwestern Idlib province, near the border with Turkey on February 25, 2020. (Photo by MUHAMMAD HAJ KADOUR/AFP via Getty Images) 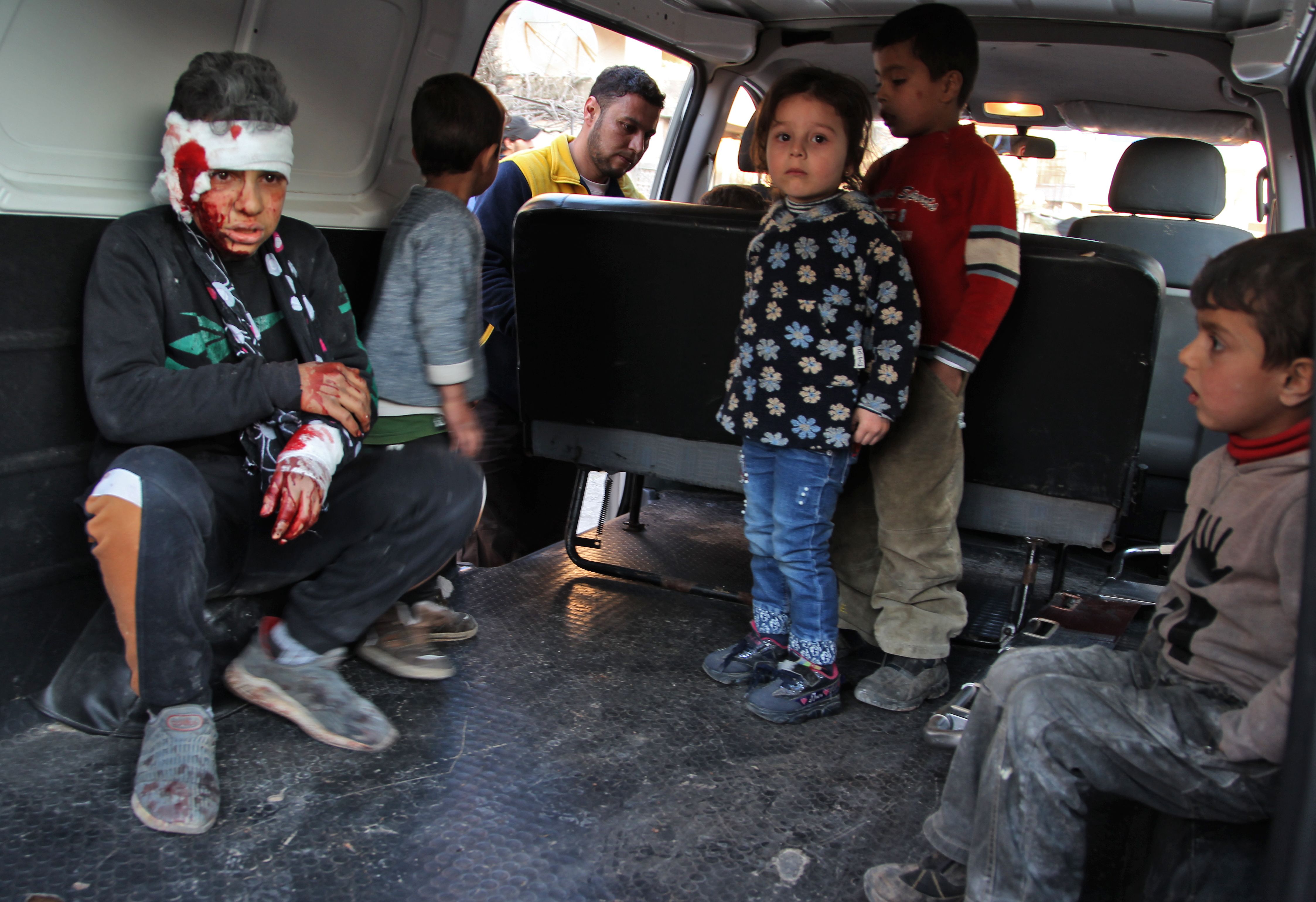 Graphic content — Syrian children sit inside a vehicle as they are evacuated from the scene of a pro-regime forces air strike in the town Maarrat Misrin in Syrias northwestern Idlib province, on February 25, 2020. (Photo by ABDULAZIZ KETAZ/AFP via Getty Images)

Turkish-backed Syrian rebels recaptured the Idlib town of Nairab from the Syrian government on Monday. The opposition fighters now have a clear pathway to march on Saraqeb, a town strategically located between two major highways in the province.

Several rounds of talks between Russian and Turkish negotiators in recent weeks have failed to yield a solution for the growing crisis in Idlib. Erdogan announced that he will meet March 5 with Russian President Vladimir Putin to discuss the situation in Idlib, but the Kremlin has yet to confirm.

Russia has stood behind its longtime ally Bashar al-Assad as his forces battled Turkish troops in Idlib. Moscow has argued that the Syrian government’s offensive in the province is fully legitimate and recently accused Turkey of supporting terrorist groups. 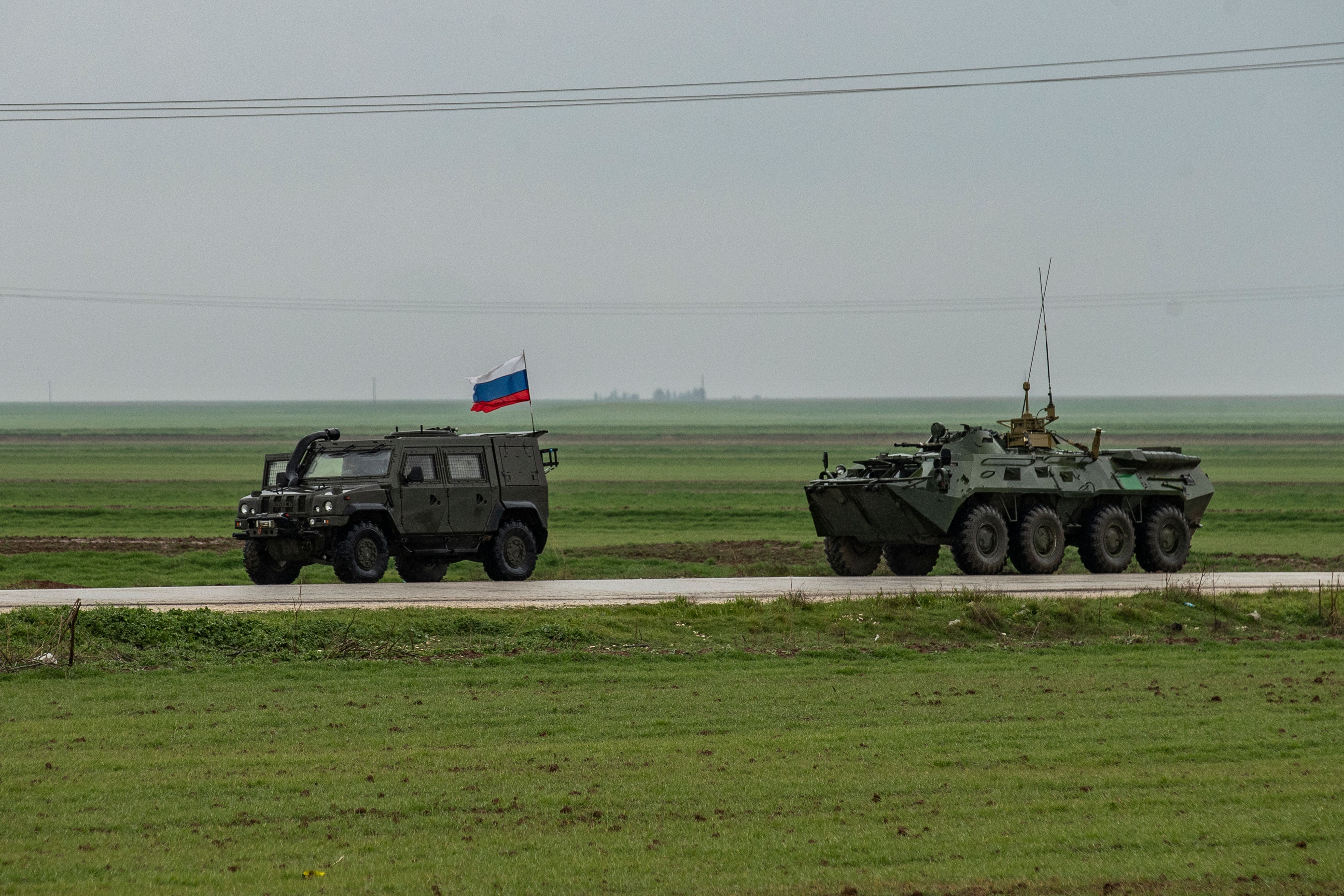 Russian military vehicles patrol the M4 highway in the northeastern Syrian Hasakeh province on the border with Turkey, on February 22, 2020. (Photo by DELIL SOULEIMAN/AFP via Getty Images)

Located in northwest Syria, Idlib is the last rebel-controlled province in the country. The opposition forces in Idlib are spearheaded by Hayat Tahrir al-Sham, a former affiliate of al-Qaida.

As Assad gradually regained much of the rebel territory in Syria, his forces increasingly turned their attention to Idlib. But Russia and Turkey reached a deal in September 2018 to establish a de-escalation zone in the province, thereby preventing Assad from fully retaking it.

That agreement has broken down over the past year, with both sides accusing each other of failing to honor their commitments. In December, the Syrian government launched a new offensive in Idlib backed by Russian air support. Pro-Assad forces have since then captured several key towns in the province and regained control of a major highway.

The offensive has also produced a new wave of refugees. According to the United Nations, nearly a million people have fled their homes and headed to the northern border with Turkey since Assad’s forces began their campaign. The influx of refugees has alarmed Turkey, which currently houses 3.6 million Syrian refugees and is adamant that it cannot take anymore. 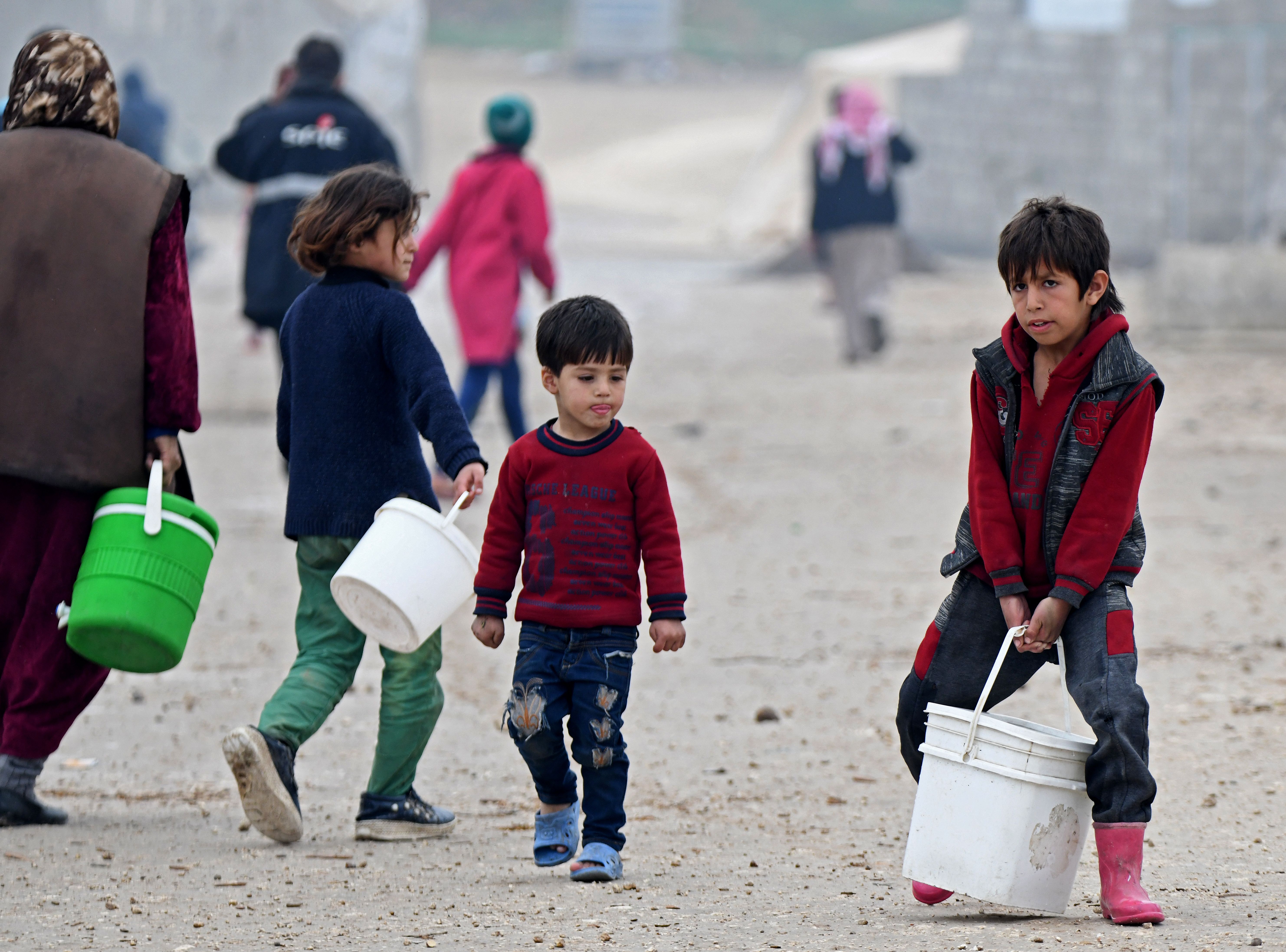 A displaced Syrian boy carries a bucket of humanitarian aid, consisting of heating material and drinking water, at a camp in the town of Mehmediye, near the town of Deir al-Ballut along the border with Turkey, on February 21, 2020. (Photo by RAMI AL SAYED/AFP via Getty Images)

As the crisis in Idlib continues to grow, Erdogan has turned to the U.S. for help. On Feb. 20, Turkey asked the U.S. to provide it with the Patriot missile system and to launch air patrols over Idlib to help deter Russia. The request represented a sharp departure from Turkey’s foreign policy over the past year, when it previously installed the Russian S-400 missile defense system despite U.S. protests and threats of sanctions.

The State Department has firmly sided with Turkey in its dispute with Russia and Syria over Idlib, Matthew Petti of The National Interest reported. During his visit to Ankara earlier in February, U.S. Special Envoy James F. Jeffery expressed solidarity with the Turkish soldiers killed by pro-Assad forces in Idlib.

“Today, in Idlib, our ally Turkey’s soldiers are facing a threat,” he said. “We have martyrs on the ground.” 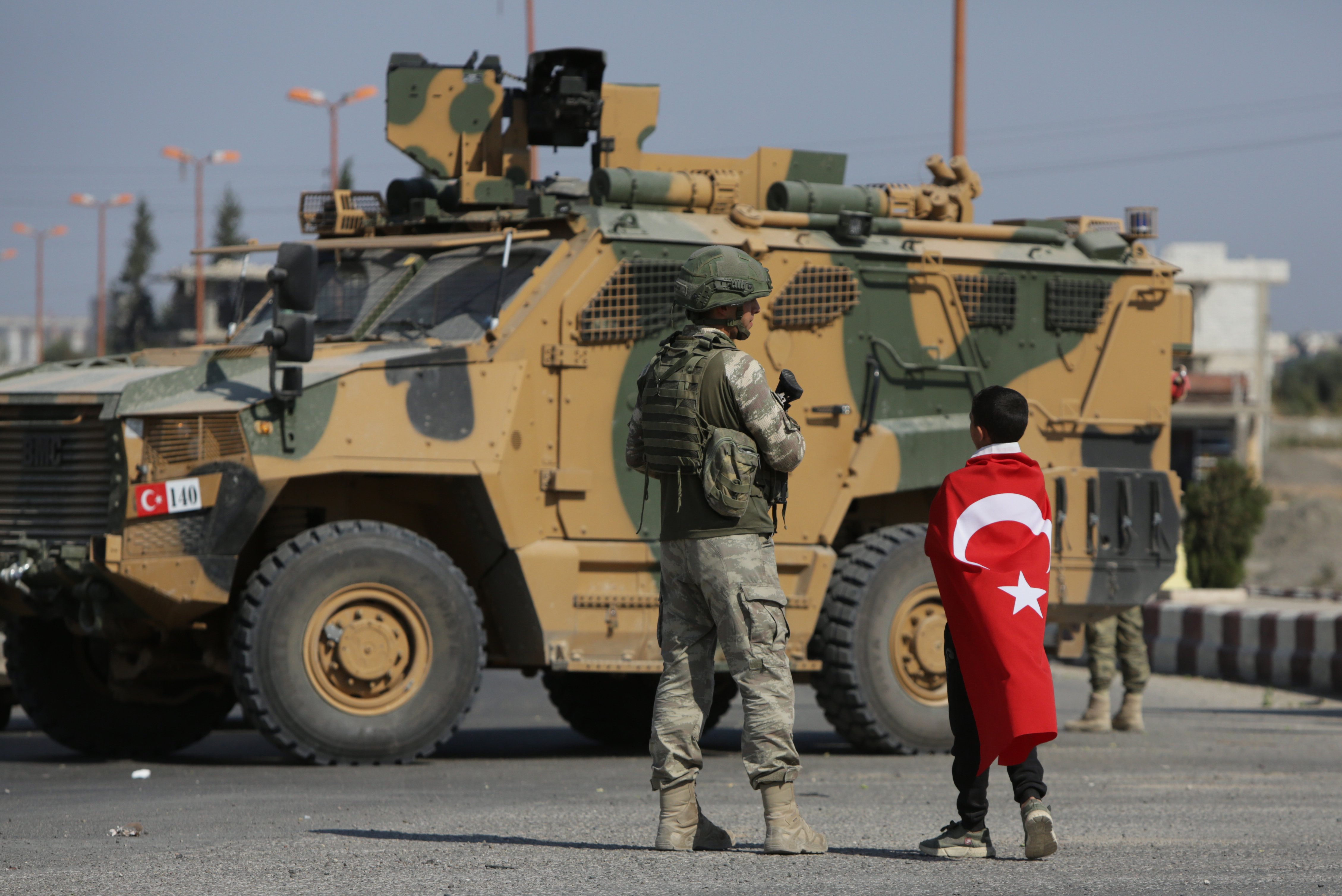 Turkish soldiers patrol the northern Syrian Kurdish town of Tal Abyad, on the border between Syria and Turkey, on October 23, 2019.  (Photo by BAKR ALKASEM/AFP via Getty Images) 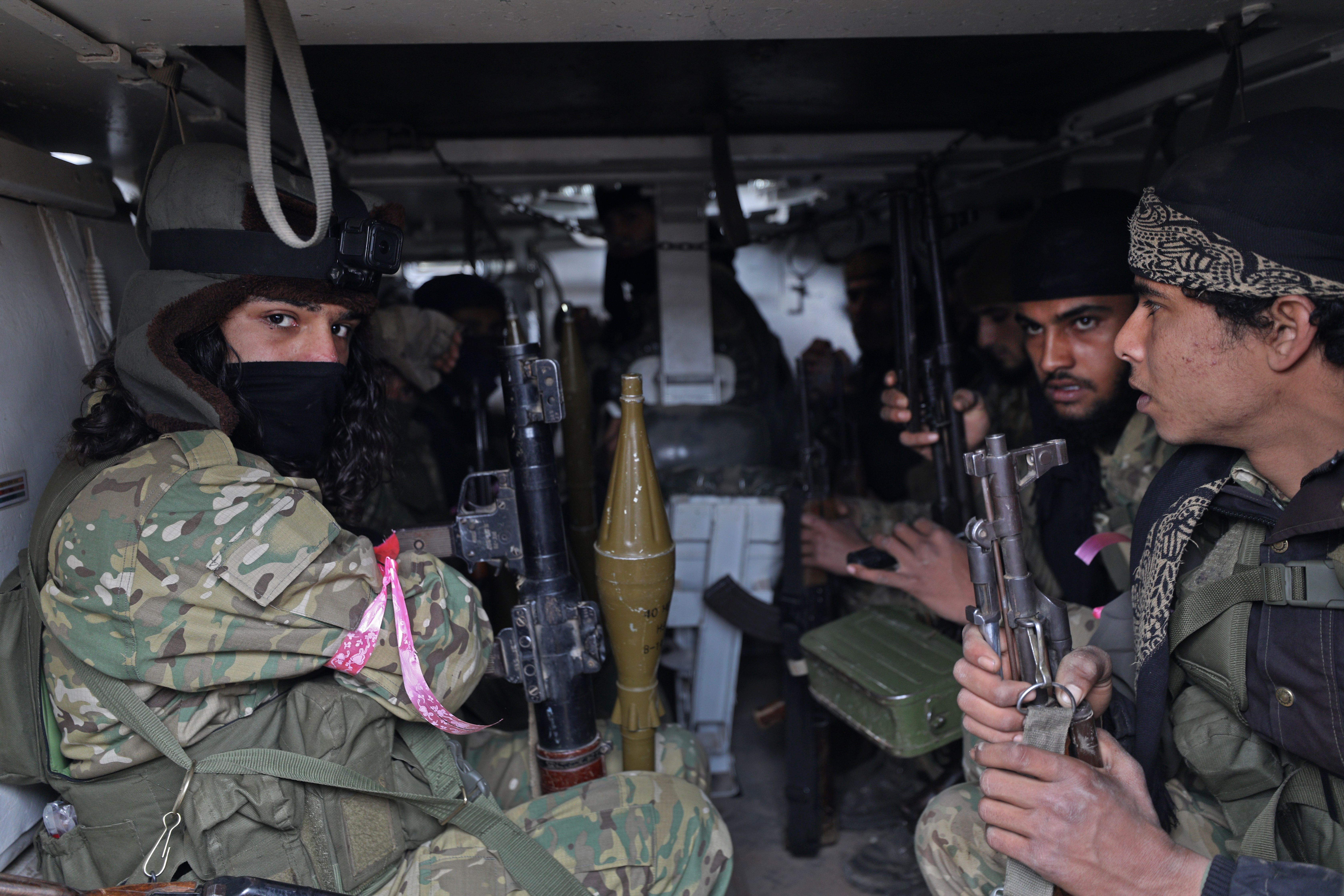 Members of the “Syrian National Army”, an alliance of Turkey-backed rebel groups, ride in an armoured personnel carrier (APC) in the town of Sarmin, about 8 kilometres southeast of the city of Idlib in northwestern Syria, on February 24, 2020, as they take part in a military offensive on the village of Nayrab following an artillery barrage fired by Turkish forces. (Photo by OMAR HAJ KADOUR/AFP via Getty Images)

He later told Turkish television that Damascus, along with its allies in Moscow and Tehran, would have to reconsider the offensive in Idlib once they “see that they’re not going to make any more [military] progress without coming into conflict with us.”

The Pentagon has taken a more cautious approach. Instead of endorsing Turkey, Department of Defense officials have sought to distance themselves from the rebels in Idlib and called for a de-escalation of tensions between Moscow and Ankara.

The U.S. and Turkey are both members of the North Atlantic Treaty Organization (NATO). Under Article 5 of the alliance, an attack on one NATO member state is treated as an attack against all NATO members, obliging them to come to its defense.