FBI notes unsealed on Wednesday show that bureau officials discussed whether the goal of an interview with Michael Flynn just days into the Trump administration was “to get him to lie” in order to get him fired or in legal jeopardy, Flynn’s lawyers say.

“What is our goal? Truth/Admission or to get him to lie so we can prosecute him or get him fired?” Bill Priestap, who served as FBI’s chief of counterintelligence, wrote in the notes, according to a transcription from Flynn’s attorneys.

She said the records also show that FBI officials intentionally avoided warning Flynn that making false statements to the FBI is a crime.

U.S. Attorney Timothy Shea produced the documents to Flynn’s lawyers on Wednesday. They were discovered last month by the U.S. Attorney in the Eastern District of Missouri, who has been directed to review the Justice Department’s handling of Flynn’s prosecution.

Flynn pleaded guilty in the special counsel’s investigation on Dec. 1, 2017 to making false statements during that interview regarding his conversation with Kislyak regarding U.S. sanctions against Russia. He has since sought to withdraw from the guilty plea, saying he did not lie to the FBI. (RELATED: US Attorney Is Investigating 2017 Leak To WaPo About Michael Flynn)

Flynn and his lawyers have accused federal prosecutors of withholding evidence that would show both that Flynn did not lie to investigators, and that he was set up in a perjury trap.

Two FBI agents, including Peter Strzok, interviewed Flynn on Jan. 24, 2017 regarding his contacts a month earlier with Sergey Kislyak, the Russian ambassador.

Andrew McCabe, who then served as deputy director of the FBI, arranged the interview.

The new batch of documents includes email exchanges between Strzok and FBI attorney Lisa Page discussing whether FBI investigators are required to admonish interview witnesses about penalties for lying to the FBI at the beginning of an interview.

The notes do not identify the note taker, though CNN and other outlets reported that it is Priestap.

Another email turned over to Flynn’s team shows Strzok emailed then-FBI general counsel James Baker a list of questions for McCabe to prepare for ahead of his phone call to Flynn.

“I’m sure he’s thought through these, but for DD’s [McCabe’s] consideration about how to answer in advance of his call with Flynn,” Strzok wrote.

He encouraged McCabe to prepare for Flynn to ask questions regarding whether he was the target of an investigation, whether he needed an attorney, and whether he should inform the White House. 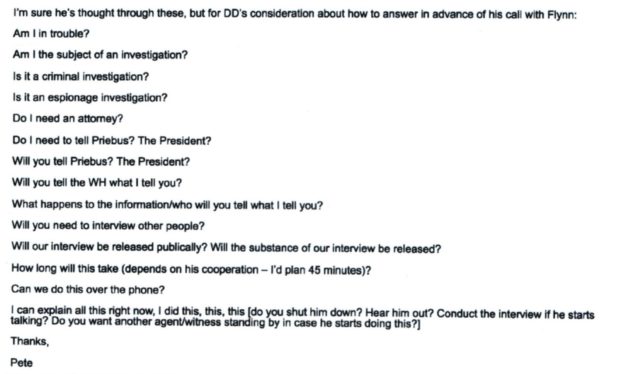 McCabe wrote in a memo after his phone call to Flynn that he urged Flynn to meet with the two FBI agents without lawyers present.

Flynn agreed to the terms of the meeting, telling McCabe that he thought White House attorneys “would not be necessary.”

Flynn’s former attorney, Robert Kelner, said in a court filing in December 2018 that Strzok and his fellow FBI investigator did not warn Flynn about the penalties for lying to the FBI “before, during, or after the interview.”

Flynn was fired as national security adviser on Feb. 14, 2017 after the White House said he provided misleading answers to Vice President Mike Pence about his phone calls with Kislyak.