U.S. Attorney John Durham has reportedly been investigating leaks in early 2017 to The Washington Post for a story about Michael Flynn that ultimately led to the former national security adviser being fired from the White House.

Investigators working for Durham have asked witnesses about a leak of information to David Ignatius, a WaPo columnist, The New York Times reported, citing three people familiar with the inquiry.

The report is the first indication that Durham, the U.S. attorney for Connecticut, is focusing on media leaks as part of an expansive probe into issues related to the government’s investigation into possible ties between Trump associates and the Russian government.

Durham has been investigating the FBI’s handling of the Steele dossier and the CIA’s handling of intelligence regarding Russia’s interference in the 2016 election. (RELATED: Michael Flynn: ‘I Regret Pleading Guilty’)

A column that Ignatius wrote on Jan. 12, 2017, helped stoke conspiracies of collusion between Team Trump and the Kremlin.

Citing a “senior U.S. government official,” Ignatius reported that Flynn spoke in late December 2016 to Sergey Kislyak, who then served as ambassador to Russia. 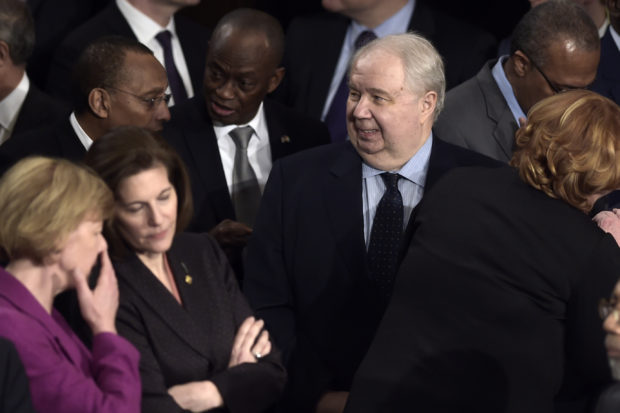 Russian Ambassador to the US Sergey Kislyak (C) arrives before US President Donald Trump addresses a joint session of the US Congress on February 28, 2017, in Washington, DC. (BRENDAN SMIALOWSKI/AFP via Getty Images)

Ignatius wrote that Flynn “cultivates close Russian contacts,” and questioned whether the retired lieutenant general spoke with Kislyak about sanctions that the Obama administration had placed against Russia.

A team of reporters at WaPo followed up with a story on Feb. 9, 2017, citing nine current and former government officials who said that Flynn discussed sanctions with Kislyak. It has since been revealed that investigators had transcripts of Flynn’s phone calls with Kislyak.

Flynn pleaded guilty on Dec. 1, 2017, to making false statements to the FBI on Jan. 24, 2017, regarding his conversations with Kislyak. He has since attempted to pull out of the plea deal, claiming that he did not knowingly lie to investigators. He has said that he took a plea deal in order to protect his son from legal jeopardy.

Republicans have long called for the Justice Department to scrutinize a series of leaks of seemingly classified information related to the Trump administration and the Russia probe.

The FBI obtained authorization to conduct surveillance on Carter Page, a former Trump campaign adviser, WaPo reported April 11, 2017. The existence of the surveillance warrants was classified at the time. It has since been revealed that the FBI misled the federal court that granted the warrants by withholding information regarding the Steele dossier.