Documents released last week have helped fill in the timeline of events that preceded a leak to The Washington Post that is central to the federal case against Michael Flynn, the former national security adviser.

House Intelligence Committee transcripts released Thursday show that several Justice Department officials, Obama White House officials and others in the administration denied being the source of the leak, which WaPo columnist David Ignatius published on Jan. 12, 2017.

Ignatius made a passing reference in his column to Flynn’s phone calls in late December 2016 with Sergey Kislyak, the Russian ambassador to the United States.

The veteran columnist cited a “senior U.S. government official” who said that Flynn called Kislyak multiple times on Dec. 29, 2016, the same day that the Obama administration announced it was kicking 35 Russian officials out of the United States as retaliation for the Russian government’s hacking of U.S. political campaigns. (RELATED: DOJ Drops Case Against Michael Flynn)

“What did Flynn say, and did it undercut the U.S. sanctions?” Ignatius asked in the column.

He brought up the Logan Act, which “bars U.S. citizens from correspondence intending to influence a foreign government about ‘disputes’ with the United States.”

“Was its spirit violated?” Ignatius asked of the law, which has never been successfully prosecuted.

Ignatius’s column set off a chain of events that culminated in a White House interview with Flynn on Jan. 24, 2017.

The retired general pleaded guilty to making false statements to the FBI in that interview. The Justice Department filed a motion Friday to drop those charges, citing a slew of new documents in Flynn’s case.

Sidney Powell, Flynn’s personal attorney, said that the sources behind the leak should be investigated for a possible conspiracy to target Flynn.

“The leak of the Kislyak transcript is a felony that should be prosecuted to the max including a conspiracy charge for all those who decided to make it happen as part of the setup and framing of General Flynn,” she told the Daily Caller News Foundation.

Trey Gowdy, the former congressman, noted in an interview Sunday on Fox News that the penalty for leaking classified information such as the Flynn-Kislyak call is steeper than that for making false statements to the FBI.

“That is a 10-year felony to disseminate classified information,” Gowdy said. “Michael Flynn was the victim of that crime.”

Republicans have speculated about the leak in the three years since it appeared in Ignatius’s column.

The leak seemingly would have sprung between Jan. 4, 2017, when government officials first received a classified transcript of Flynn’s call with Kislyak, and Jan. 12, 2017.

Flynn’s phone call with Kislyak was on Dec. 29, 2016, but a transcript of the phone call was not provided to the FBI until several days later.

Ignatius’s reference to the Logan Act could be a potential clue as to the source for the Flynn information.

The Justice Department released FBI emails Thursday showing that top officials at the bureau researched the Logan Act nearly as soon as investigators learned of the Flynn-Kislyak transcript.

The emails show that on Jan. 4, 2017, FBI attorney Lisa Page and deputy counterintelligence chief Peter Strzok exchanged emails regarding the Logan Act. Page forwarded one email on the topic to James Baker, who served as FBI general counsel. She also sent an email to an address that appears to belong to McCabe, the documents show. 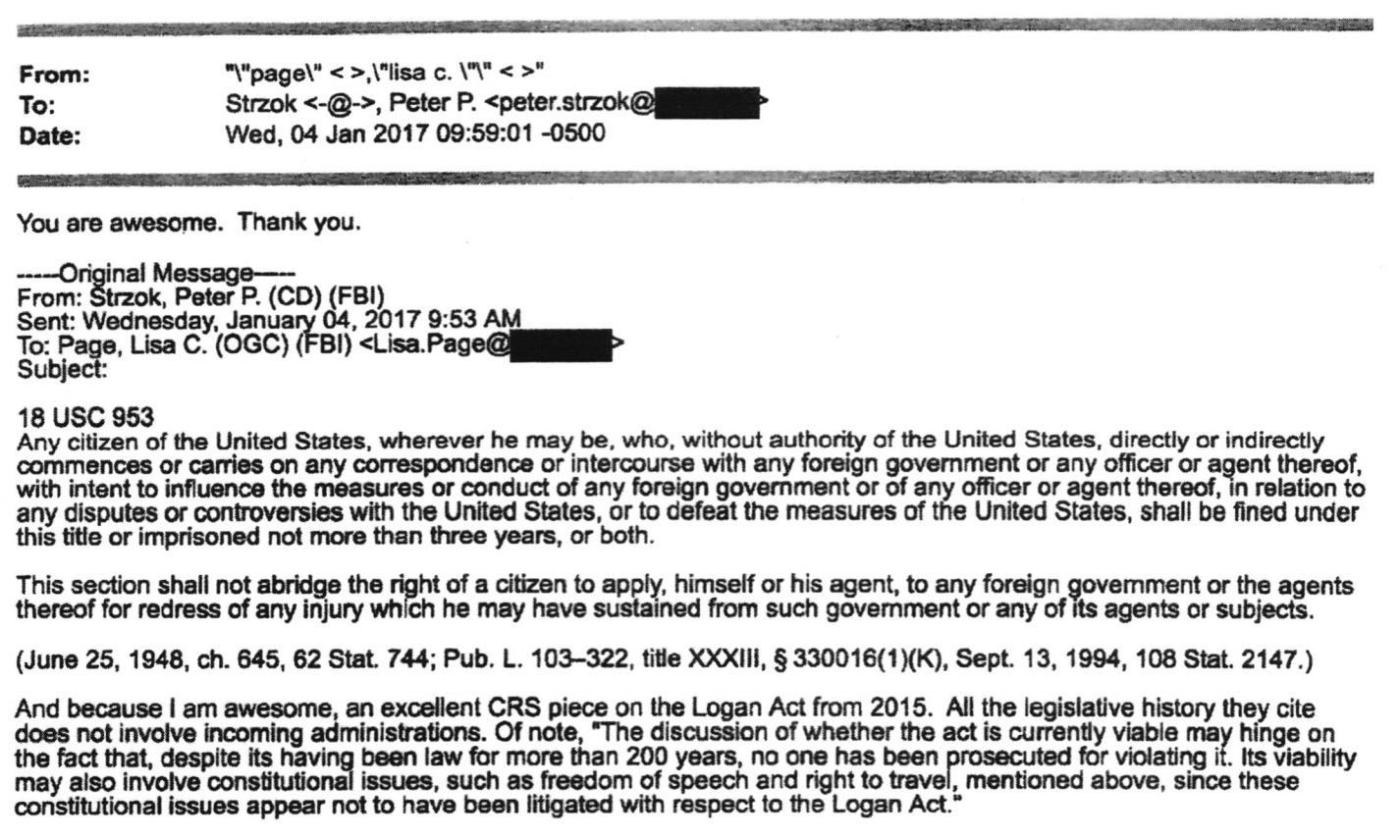 James Comey, who then served as FBI director, was aware of the Flynn call. He told the House Intelligence Committee on March 2, 2017, that he briefed James Clapper on the Flynn information. He testified that Clapper briefed President Barack Obama about the contents of the transcript.

Transcripts from the House Intelligence Committee released on Thursday show how the intelligence on the Flynn-Kislyak transcript spread through the Obama administration.

Several Obama White House and administration officials denied being the source of the Flynn leak during their House Intelligence Committee interviews.

Ben Rhodes, a senior Obama adviser, Susan Rice, the national security adviser for Obama and Samantha Power, the ambassador to the United Nations, all denied being the source for the story. Clapper said he “didn’t leak anything” and didn’t know who did.

McCord, who served as assistant attorney general for national security, said that she and Justice Department officials she met with a day after Ignatius’s story said they “were all pretty shocked” to see the Flynn information.

McCord told the FBI in an interview that she first heard of the Logan Act in relation to the Flynn case from Bob Litt, who then served as general counsel of the Office of the Director of National Intelligence.

Litt told the DCNF that he was not the source of the leak and that he brought up the Logan Act on his own.

“I’ve never spoken to David Ignatius about anything connected with Flynn or the Russia investigation,” Litt told the DCNF.

“I identified the Logan Act issue on my own. I may or may not have mentioned it to others at ODNI — no recollection either way — but I know I spoke about it to people at DOJ and FBI as it was their issue not ODNI’s.”

Yates testified that she learned of the Flynn-Kislyak phone call on Jan. 5, 2017, following a meeting in the Oval Office. She said that Obama told her and Comey that he was aware of the information about Flynn. Comey then raised the issue of the Logan Act with Yates.

“Yates recalled Comey mentioning the Logan Act, but can’t recall if he specified there was an ‘investigation.’ Comey did not talk about prosecution in the meeting,” reads an FBI summary of an interview with Yates.

Yates told the FBI that McCord and George Toscas, a deputy assistant attorney general in the national security division, had been briefed on the Flynn information by the FBI.

Congressional investigators are still interested in finding out who leaked the Flynn information to WaPo.

“We’re getting a starkly different view of what the FBI and DOJ was up to as the curtain is being pulled back, and more transparency is still needed,” one Senate aide told the DCNF.

“If the government pursued leakers of classified information with half as much spirit as it put into taking down Flynn, the public would be subjected to far less spin at the expense of national security,” added the aide, who spoke on the condition of anonymity because they are not authorized to speak publicly.

A 2018 interview that resurfaced over the weekend suggests that Ignatius might not have been the original recipient at WaPo of the leak. Adam Entous, a national security reporter who worked at the newspaper, said at an event in 2018 that he heard “whispers” of the Flynn-Kislyak phone call, and discussed it as a possible news story during meetings at the publication.