Democratic House Speaker Nancy Pelosi said the House is looking into a Senate-passed bipartisan bill that would ban several Chinese companies from listing their shares on the U.S. stock exchange.

“We’ll review it in the House. I’ve asked my committees to take a look at what it is,” Pelosi told Bloomberg Television, according to the Hill.

Submitted by Republican Louisiana Sen. John Kennedy, the Holding Foreign Companies Accountable Act would expel companies from U.S. exchanges that refuse to submit to mandatory audits by the Securities and Exchange Commission, which Kennedy indicated the U.S. has allowed China to get away with for years. (RELATED: Trump Halts Federal Retirement Investments In Chinese Funds)

“I don’t want to have a cold war with China,” Kennedy told the Senate on Wednesday. “All I want, and I think all the rest of us want, is for China to play by the rules.” 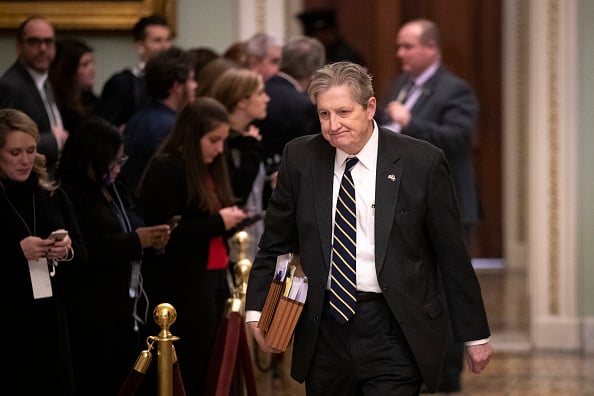 Sen. John Kennedy (R-LA) walks to the Senate floor for the start of impeachment trial proceedings at the U.S. Capitol on January 21, 2020 in Washington, DC. (Photo by Drew Angerer/Getty Images)

The goal of this bill is to create greater transparency and a more level playing field around public investments, according to Tom Mackenzie from Bloomberg News.

“If signed into law would require companies to certify that they are not under the control of a foreign government,” said Mackenzie, “if they can’t prove that and if an audit can’t make a determination then the company could ultimately be banned from U.S. exchanges.”

This could impact the likes of Alibaba, Baidu and other Chinese companies, according to Mackenzie.

Members of the Trump administration, including the director of the U.S. National Economic Council, Larry Kudlow, have also voiced support for greater accountability and oversight of Chinese companies, according to Market Watch.