A group of black conservative leaders condemned outbreaks of violence occurring throughout the country in response to George Floyd’s death.

“Expressing grievances to our elected officials in the form of protest is a time-honored tradition. But what we are watching unfold across the country is a coordinated effort to destroy the rule of law and order in our communities and to gin up racial tension,” Project 21 Co-Chair Stacey Washington said in a press release Friday. “In video after video, we see masked white protesters dressed all in black destroying property in black neighborhoods. And it’s blacks who are trying to stop the Antifa protesters from defacing small businesses. President Trump has rightly suggested declaring Antifa a terrorist group.”

Conservative writer and Project 21 founding member Deroy Murdock referred to the rioters as “hoodlums” who are destroying primarily-black communities. (RELATED: Minneapolis Mayor Responds To Trump Calling Him ‘Very Weak’ As His City Burns) 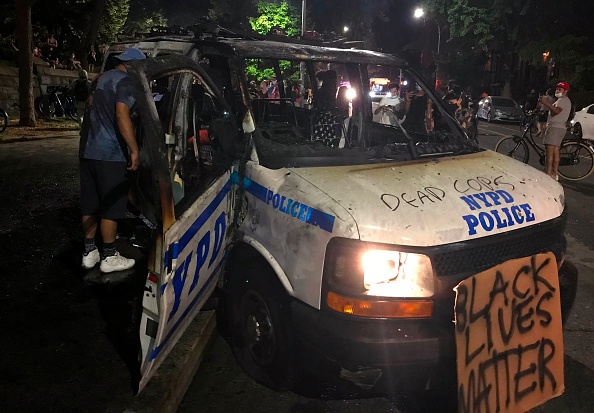 The remains of a scorched police vehicle lie vandalized during riots in the Fort Greene neighborhood in the Brooklyn borough of New York on May 29, 2020. (Photo by THOMAS URBAIN/AFP via Getty Images)

“Rioters have looted George Floyd’s spotlight. In raping and pillaging dozens of American communities, these hoodlums have shifted the nation’s attention away from Mr. Floyd’s atrocious killing at the hands of the malicious Minneapolis Police Officer Derek Chauvin and three of his at-least-criminally-negligent colleagues,” Murdock said.

Project 21 is a network of black conservatives, part of the National Center for Public Policy Research. It was created in 1992.

Violent protests have erupted across the U.S. throughout the last week after video showed police officers pinning down Floyd, with one kneeling on his neck. The officers involved have all been fired, and former officer Derek Chauvin has been charged with third-degree murder.

Outside groups, including antifa, have been blamed for inciting violence, and Trump announced Sunday that the U.S. would officially designate antifa as a domestic terrorist organization.