The obscure British group that nearly forced Google to drop ads on The Federalist is continuing its efforts to demonetize American conservative media outlets it accuses of publishing inflammatory or racist content.

The Center for Countering Digital Hate (CCDH), founded in 2019 by Labour party organizers, put out a call for donations Tuesday after NBC News reported that Google was poised to ban The Federalist and Zero Hedge, a libertarian-leaning website, from making money off of Google Ads.

CCDH’s affiliate, Stop Funding Fake News, claimed on Wednesday that it had pressured Ford, the auto maker, to consider dropping ads on Breitbart News, another conservative website that the British non-profit has accused of publishing racist material.

Google ultimately backed off of its decision to kick The Federalist off of Google Ads, but CCDH appears emboldened nonetheless.

Imran Ahmed, the CEO of CCDH, called Google’s decision the “biggest win ever” for his organization.

CCDH’s efforts follow a trend of activist groups targeting media companies by hitting them at their main sources of revenue: advertising.

The targets of the pressure campaigns have largely been conservative media outlets. Groups similar to CCDH have gone after Fox News, Rush Limbaugh and Sean Hannity. Fox News host Tucker Carlson (a co-founder of the Daily Caller) has also landed in the activist groups’ crosshairs.

CCDH landed its blow on Zero Hedge and The Federalist with minimal effort, thanks to assistance from NBC News.

On Tuesday, NBC News reported that Google had banned both sites from its Google Ads platform after the outlet presented with information from CCDH. According to NBC, Google took issue with content on both outlets regarding Black Lives Matter and the protests following the police-involved death of George Floyd.

The NBC News article was vague regarding the offensive material. Stop Funding Fake News pointed to a June 3 article at The Federalist entitled “The Media Are Lying To You About Everything, Including The Riots.”

The article, by Federalist political editor John Daniel Davidson, disputed a claim that white supremacist groups were behind much of the violence that occurred during the Floyd protests.

Google initially told NBC News that it had blocked both sites from receiving revenue from Google Ads. But the tech giant back-tracked later, issuing a statement that The Federalist had been given three days to remove its comments section, which the company claimed was the source of the inflammatory content.

Google has not responded to multiple follow-up inquires from The Daily Caller News Foundation. NBC News also did not respond to a request for comment.

The reporter who wrote the NBC piece, Adele-Momoko Fraser, thanked CCDH for their “hard work and collaboration” on the project targeting The Federalist. That prompted criticism from conservatives and some journalists who questioned why a reporter would be working with an organization with the goal of targeting a rival media outlet. 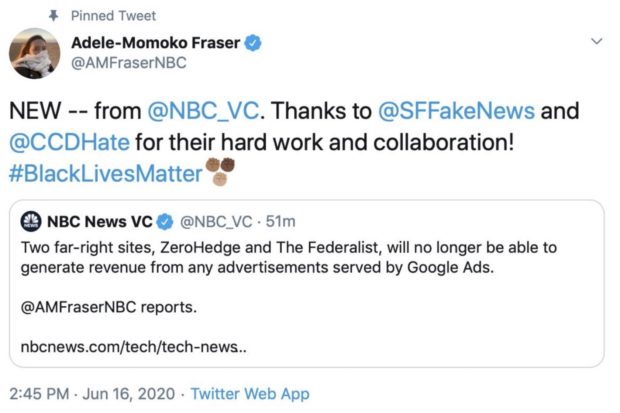 Fraser deleted her tweet and then reposted it. She responded to criticism on Twitter by saying that she obtained the research from CCDH but did not collaborate with the group on the research itself.

While Fraser denied collaborating with CCDH, her article initially said that Google took action against The Federalist “after the NBC News Verification Unit brought the project to its attention.” An updated version of the story does not include that detail.

Sean Davis, the co-founder of The Federalist, blasted NBC News in an interview on “Tucker Carlson Tonight” Tuesday, accusing the network of partnering with “a foreign left-wing group in Europe.”

“It’s being done by people who claim to be journalists, who claim to believe in free speech and freedom of expression and it’s not just that somebody came after us and try to de-platform us, the whiny cry-bullies of the left to do this all the time to their enemies, they can’t win arguments so they try and shut them down,” Davis said.

Google’s decision, as vague as it may be, appears to have emboldened CCDH.

Delighted that @SFFakeNews, working with @NBC_VC and @AMFraserNBC, has successfully persuaded @Google to stop ads appearing on Zero Hedge and The Federalist. @CCDHate’s biggest ever win. https://t.co/ur0E50DwWF

Stop Funding Fake News renewed its call for Google to take further action against eight other websites it has deemed unfit to run Google Ads.

3/ There is still much more @Google needs to do.

They must #DefundRacism by ending their @GoogleAds funding of these 8 Fake News sites:https://t.co/9QkKUmUlS3

With your help we held Google to account on their promise to support #BlackLivesMatter.

Now Google Ads will no longer fund racist content on Zero Hedge or The Federalist.

We need help to continue this work. Please support us with a donation if you can: https://t.co/n7fUMhKuzC

On Wednesday, the group claimed that its work has led Ford, the auto maker, to review whether it will continue running ads at Breitbart News.

CCDH targeted Breitbart over a June 5 article that offered tips to survive “the coming era of social justice mob rule.”

Thanks to activists following up our thread, @Ford are looking into their ad placements on Breitbart.

Now is the time when activists can make a real difference: let @Ford @FordUK know that you’d like them to take action to #DefundRacism! https://t.co/NqYpVknXnu pic.twitter.com/QvCBTLlSCA

CCDH was virtually unknown in the U.S. until the NBC News story.

In the UK, the group has mounted pressure campaigns targeting David Icke, a British conspiracy theorist. CCDH has also sought to force social media companies to remove content they claim promoted misinformation regarding the coronavirus pandemic.

Stop Funding Fake News thanked another Labour parliamentarian, Kevin Brennan, for providing its research to Google that was part of the attempt to demonetize The Federalist and Zero Hedge.

It is not clear exactly what role Brennan played in targeting The Federalist and Zero Hedge.

According to CCDH’s website, its de-platforming campaign is funded by Rachel Riley, the host of the British game show “Countdown.”

Riley commented in on the Google story with a tweet supporting the Stop Spreading Fake News campaign. “If you’re p*ssing off Donald Trump Jr, whilst defunding alt-right websites whose lies seek to cover up for white supremacists stoking violence, you’re probably on the right track,” Riley said in a retweet of Stop Funding Fake News.

If you’re p*ssing off Donald Trump Jr, whilst defunding alt-right websites whose lies seek to cover up for white supremacists stoking violence, you’re probably on the right track.