Seattle will be ending the “Capitol Hill Organized Protest” (CHOP) and reinstating the police precinct after increased violence and impact on businesses and residents.

“The continued disorder, the violence and the impacts on residents and businesses are not just at odds with the message of justice and equity, they cannot continue to occur,” Democratic Seattle Mayor Jenny Durkan announced in a press conference June 22.

The six-block area boasts of no cops and autonomy. It began during George Floyd protests and has a segregated “blacks and indigenous folks” garden, tents, porta-potties, and a “Black Lives Matter” mural painted along one of the streets. Police reluctantly abandoned the East Police Precinct after a city order.

Durkan stressed “rethinking and re-imagining policing” as well as Capitol Hill’s importance to all residents. Seattle will be investing more in black communities and the city’s youth to “address systemic inequalities” the mayor said. 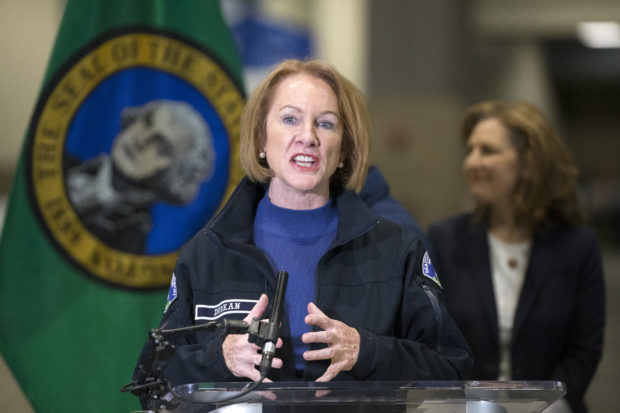 “No major incidents” during the day have occurred, Durkan said, but on the nights of June 20 and 21, three were shot leaving one dead, Police Chief Best shared. “That escalating violence concerns me…no violence is acceptable,” said Durkan. (RELATED: Before And After Photos: Here’s What Seattle’s ‘CHAZ’ Has Done To The City)

The mayor walked back her comment depicting CHOP as a “summer of love” in an interview with Q13 FOX. “I clearly said that in jest, it probably was not the smart thing to do,” said Durkan. One Seattle resident was terrified of the area.

No deadline was given for CHOP’s end, but Durkan said she is hopeful community organizations will “engage individuals to leave voluntarily.” Over 100,000 different 911 calls need responses, which is a reason the Seattle Police Department (SPD) needs to return its East Precinct building, Durkan shared at the press conference.

The police chief called for “community led” change, but did not outline specific reforms at the press conference. Best rebuked the city council’s decision to ban tear gas and said a “life might have been saved” if not for “hasty legislation.” The police chief defended the use of tear gas, saying the only tools they had left were batons and guns.

Reforms for the community included “investing in black and marginalized communities” and providing “everything from free college to preschool to transit passes,” the mayor shared.