A statue of black abolitionist and freed slave Frederick Douglass was ripped off its concrete base and dragged away in a Rochester, New York park Sunday night.

The statue was discovered damaged 50 feet from its base and along a nearby river, The Democrat and Chronicle reported. It was not immediately clear who was responsible for the vandalism and the perpetrators didn’t leave graffiti on the statue or in the park, according to Rochester police.

“It’s really sad because here in Rochester the statue of Frederick Douglass has always been a face of good,” said Carvin Eison, who helped erect Douglass statues around Rochester, according to The Democrat and Chronicle. (RELATED: It’s A Good Time To Revisit Frederick Douglass’s Famous Independence Day Speech)

The base where a Frederick Douglass statue was torn from in Rochester’s Maplewood Rose Garden. It was found just over that fence in the background with damage. I’m told this base will now have to be dug up if the statue does return. LIVE on @13WHAM @FoxRochester pic.twitter.com/Le6x3lGfR8

The statue was located in Maplewood Park, where Douglass and Harriet Tubman shuttled slaves to safety on the Underground Railroad. The vandalism occurred on the anniversary of Douglass’ 1852 “What to the Slave is the Fourth of July?” speech, which he gave in downtown Rochester, according to The Democrat and Chronicle.

“I am not included within the pale of this glorious anniversary! Your high independence only reveals the immeasurable distance between us,” Douglass said, according to The Daily Caller. “The blessings in which you, this day, rejoice, are not enjoyed in common.”

The Rochester Police Department did not immediately respond to request for comment.

A separate Douglass statue in Rochester was the first statue in the country to memorialize a black citizen, according to historical researcher Emily Morry. Theodore Roosevelt, who was the governor of New York at the time, attended the memorial’s 1899 dedication.

“It is fitting that it should stand near a great portal of our city where the thousands who enter it may see that she is willing to acknowledge to the world that her most illustrious citizen was not a white man,” said Mayor George E. Warner at the ceremony, according to Morry.

The base of a Frederick Douglass statue torn down overnight here in Maplewood Park. Bits of the statue scattered around the area. @News_8 pic.twitter.com/L6qgV7bVH2

Douglass lived in Rochester for nearly 30 years after he escaped from slavery in 1838, according to The Democrat and Chronicle. More than a dozen Douglass statues have been erected around the city, where he is also buried. (RELATED: Black Lives Matter Totally Shuts Down Nation’s Capital On Independence Day)

Statues and monuments have been under attack across the country in protests against racial inequality and police brutality following the death of George Floyd. Floyd died in Minneapolis police custody on May 25 after an officer kneeled on his neck, video shows. 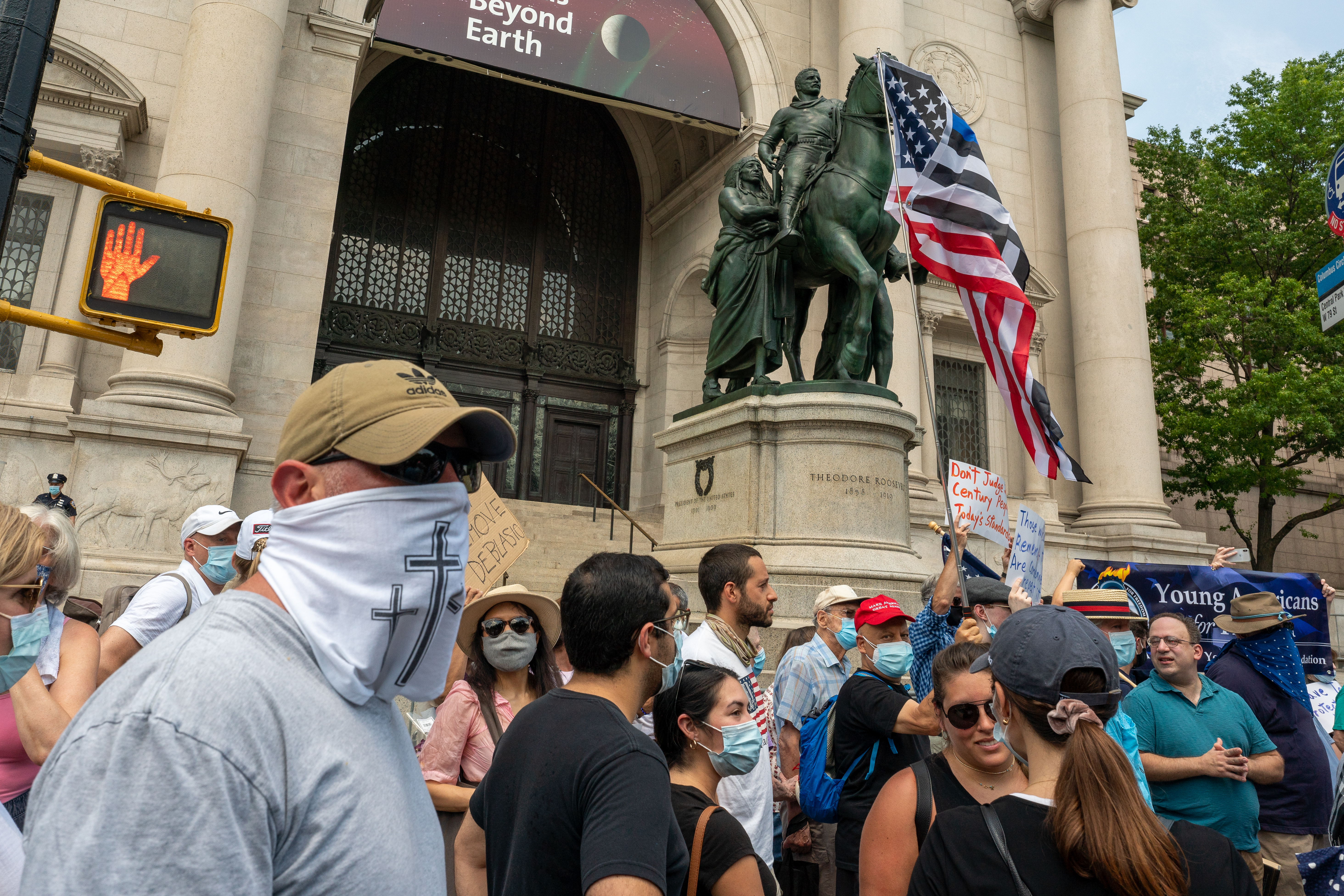 A rally led by the New York Young Republican Club calls for the statue of Theodore Roosevelt to remain in place on June 28, 2020 in New York City. (David Dee Delgado/Getty Images)

“People are making a statement about equality, about community, to be against racism, against slavery. I think those are good statements,” New York Gov. Andrew Cuomo said on June 23 in response to a question on statues.

Mayor Bill de Blasio approved the removal of the Theodore Roosevelt statue located outside the American Museum of Natural History in New York City on June 22, according to The New York Times. Cuomo supported the statue’s removal.

Protesters in Madison, Wisconsin tore down the statue of abolitionist Col. Hans Christian Heg statue in June. Heg was a Norwegian immigrant who fought for the North in the Civil War, according to the Wisconsin Historical Society. Heg was shot in a battle in Georgia in September 1863 and died the next morning.