Text messages read out during the first day of a defamation trial against Christopher Steele in London on Monday revealed new details about how the former British spy strategized with associates on how to disseminate the infamous anti-Trump dossier.

In one message after Donald Trump’s election win in November 2016, Steele asked Strobe Talbott, who then served as president of the prestigious Brookings Institution, how he wanted to handle “the package” — a reference to the dossier.

In another message from early 2017, Steele urged David Kramer, an associate of Sen. John McCain’s, not to tell reporters that Steele had been a source for another journalist on a dossier-related story.

And in a message weeks earlier, Steele told Sir Andrew Wood, the former British ambassador to Russia, that McCain was “compromised” by being given a copy of the dossier.

Lawyers for a Russian tech executive, Aleksej Gubarev, read the text exchanges and others during the first day of Steele’s trial to establish that the ex-MI6 officer was deeply involved in the dissemination of information from the dossier.

Gubarev is suing Steele for defamation over the dossier, which BuzzFeed published on Jan. 10, 2017.

Andrew Caldecott, the lead lawyer for Gubarev, said that Talbott, who served as deputy secretary of state in the Clinton administration, called Steele in August 2016 inquiring about his investigation of the Trump campaign.

“Mr. Talbott telephones Mr Steele out of the blue in August 2016, having heard about his work and offers advice if needed,” Caldecott said, according to a copy of his remarks obtained by The Daily Caller News Foundation.

Steele and Wood took Talbott up on his offer in early November 2016, just after the FBI cut ties with Steele because he served as a source for Mother Jones reporter David Corn. (RELATED: Here’s How The Steele Dossier Spread Through The Media And Government)

“Sir Andrew Wood and Mr. Steele telephone Mr Talbott on 2nd or 3rd November 2016, and Mr Talbott asks for copies of the memoranda to discuss with John Kerry and other officials at the State Department,” Caldecott said.

Fusion GPS, the firm that hired Steele on behalf of the Democratic National Committee and the Clinton campaign, provided the dossier to Talbott, according to the lawyer.

After Trump’s surprising election win, Steele contacted Talbott to discuss “the package” that had been delivered to him the week before, an apparent reference to the dossier, according to Caldecott’s reading of Steele’s messages.

Steele asked the former diplomat to advise how they “should handle” the salacious document.

“Dear Strobe, I know this is not straight forward but we need to discuss the package we delivered to you the other week, and sooner the better. What you thought of it, what you did with it, how we (both) should handle it and the issue it highlights going forward etc.,” Steele wrote on Nov. 12, 2016, according to Caldecott.

It is not clear what Talbott, a longtime friend of the Clintons’, did with the dossier once he obtained it, but Fiona Hill, a former Brookings officials who served in the Trump White House, told Congress last year that Talbott provided her a copy of the dossier a day before BuzzFeed published it. 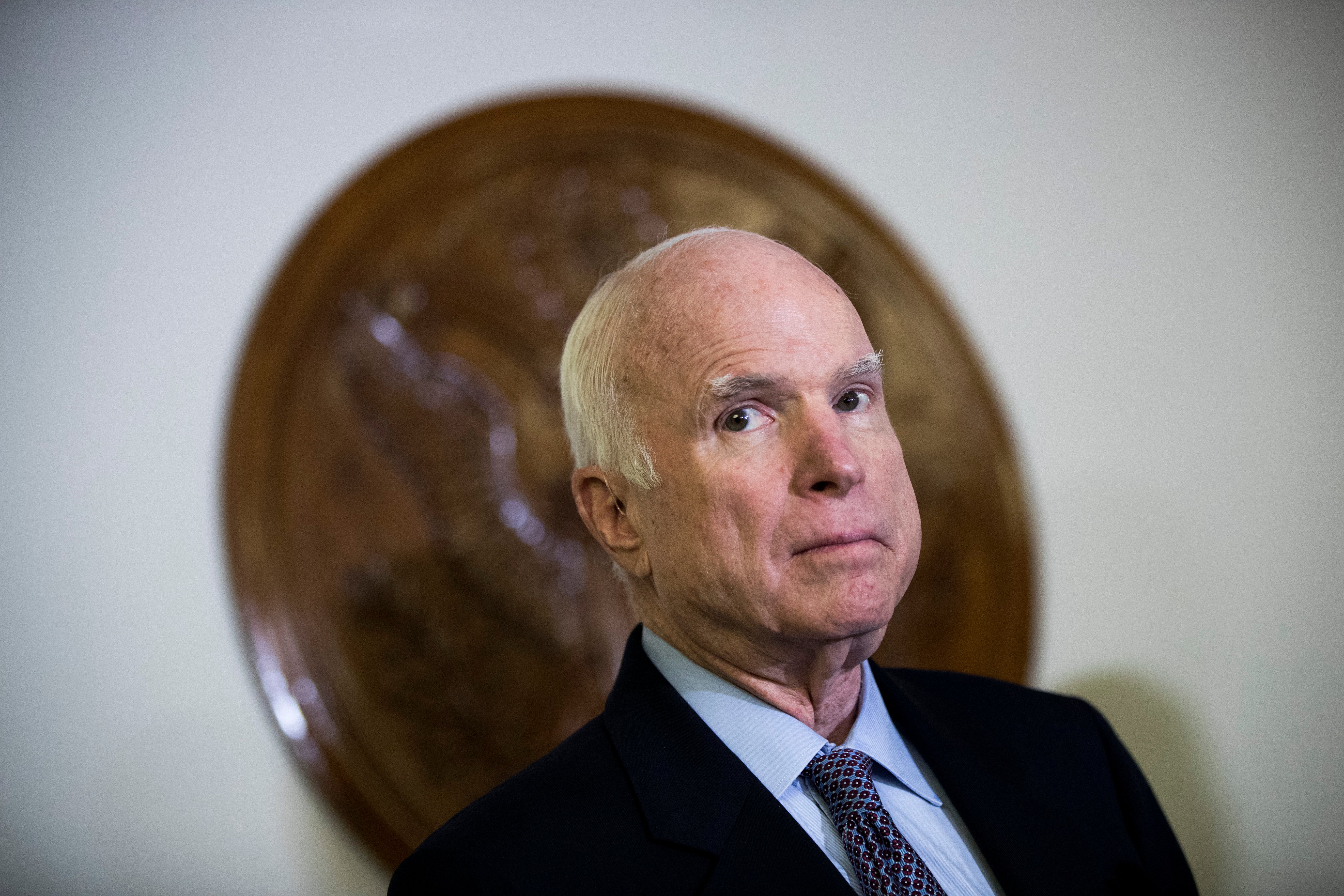 Hill testified that she was surprised that Steele, who she has known since he served in MI6, was behind the document. She also said she believed it included disinformation planted by Russian operatives.

Gubarev’s lawyers asserted that Steele ratcheted up his efforts to put the dossier into the hands of U.S. officials and members of the press after Trump’s surprise election victory.

Steele’s critics have accused him of pushing the dossier through various government agencies in order to lend it a veneer of credibility.

Steele provided information to the FBI, as well as to Justice and State Department officials. The Justice Department’s inspector general has since debunked many of the key allegations in the dossier and faulted the FBI for using it to obtain surveillance warrants against Carter Page, a former Trump campaign aide.

On Nov. 18, 2016, nearly a week after Steele’s exchange with Talbott, Wood approached McCain and Kramer, the late senator’s associate, at the Halifax International Security Forum.

Wood, the former British diplomat, told McCain and Kramer about Steele’s work, and arranged for Kramer to travel to London to meet with Steele.

Kramer, who served in the State Department under George W. Bush, obtained the dossier and provided it to McCain. The Republican shared a copy with then-FBI Director James Comey on Dec. 9, 2016.

“JM appears to have bottled it and left DK exposed,” Steele wrote, referring to McCain and Kramer by their initials.

“Indications are that wealthy R donors are buying off the critics,” he continued. “So much for patriotism! But JM has the info and therefore is compromised anyway. All quite depressing. Maybe let’s catch up in person later in the week.”

Wood responded, saying: “Yes, but not surprising. I thought the stratagem unlikely to succeed…”

Gubarev’s lawyers said they were uncertain what “strategem” Steele and Wood were working on, though they plan to ask Steele about it during his testimony this week.

The lawyers also revealed that Steele strategized with Kramer about contacts with the media.

Kramer had provided a copy of the dossier in late December 2016 to a reporter for BuzzFeed News. Steele has denied authorizing Kramer to share the dossier with journalists and has asserted that he was unaware of Kramer’s media contacts.

But Gubarev’s lawyers asserted Monday that Steele was keenly aware of Kramer’s interactions with journalists.

In one message on Jan. 2, 2017, Steele appeared to urge Kramer to not confirm that he was a source for David Corn, the Mother Jones journalist.

“Also, what might your line be tomorrow if they ask you if your ‘trusted foreign source is the same as david corn’s? best to avoid confirming this if possible i think,” Steele wrote.

Kramer messaged Steele the following day, saying: “Had a good chat with ABC tonight but they have a request: bifurcate what you have from your source and what came from here that might be less reliable.”

The dossier mainly details long-disputed allegations of collusion between Trump associates and the Kremlin. But a memo from the dossier dated Dec. 13, 2017 accuses Gubarev of using his tech company, WebZilla, to facilitate hacks of Democrats.

Gubarev has vehemently denied the charged and has sued both BuzzFeed News and Steele.

The lawsuit is the first to dossier-related case to go to trial in either the U.S. or the U.K. The judge presiding over the Gubarev lawsuit ruled against Steele in other dossier-related litigation earlier this month. In that case, the judge awarded damages to the owners of Alfa Bank, who also sued Steele over the dossier. That case did not go to trial.

Gubarev’s lawyers argue that not only are Steele’s dossier allegations inaccurate, but that the ex-spy helped circulate them to reporters without first verifying the underlying information.

The various lawsuits against Steele have provided a roadmap of how the retired spy and his dossier client, Fusion GPS, spread allegations about Trump through the press.

As part of the Gubarev case, Steele acknowledged that he briefed reporters from several news outlets prior to the 2016 election on the dossier.