Three police union executives from across the country told the Daily Caller News Foundation in phone interviews that department morale is plummeting due the actions or inaction of both local and national politicians.

All three shared a similar message: officers feel let down by city and national leaders alike.

Unrest, riots and calls to reduce law enforcement funding have followed the May death of George Floyd, who died after a police officer knelt on his neck for over eight minutes, video showed. Civil unrest has largely been reignited by the officer-involved shooting of Jacob Blake in Kenosha, Wisconsin.

“Morale in the different departments across the country is terrible,” Vallelong told the DCNF. “You have guys that are going to work every single day just to fight night after night and there’s no end in sight.”

“This is the [New York] city council, who have been in hiding since day one when this first happened,” he continued. “None of these leaders have come out to support anything other than the anarchy that’s out there.”

“They make their little statements — none of them have shown their face in the sunlight. These people are being judge and jury immediately, probably a half hour after an incident happens just to get their name out to make a political statement and it’s disgusting.”

Slocumb echoed this message and claimed much of the blame for a decline in morale comes from the rhetoric from Democratic nominee Joe Biden.

“I would say that if [Joe Biden] has to wait until the polls tell him that it’s time to condemn rioting, arson, assaults on public employees, attempts to blind police officers and firefighters — if you’ve got to wait for the polls to tell you it’s time to condemn that, then I don’t think you’re fit to be the leader of the local PTA let alone sit in the Oval Office of the White House,” he added.

Solan, who recently faced a mob of protesters gathering outside his home, slammed the Seattle city council for “political pandering” in their efforts to defund the area’s police department. The recent events in the city are a “gut punch,” he said.

Mike Solan, President of the Seattle Police Officers Guild (SPOG), likes talkin big but will not have a conversation with EDM. #seattleprotests pic.twitter.com/TeZthAQO8w

“Now they want to defund us, obviously for political pandering reasons,” Solan said. “That’s the most egregious example of a lack of support from these political talking heads that we’re most concerned about.”

“The council is governing via Twitter and pandering to [a] loud group to push an unreasonable agenda on the entire city of Seattle and they’re using police as pawns in the political power struggle — that’s a gut punch,” he continued.

The city council on Aug. 10 approved a plan to defund SPD by more than $3 million and could potentially cut jobs for more than 100 officers, according to KOMO News. Solan has also spearheaded a resistance to the move by creating a website called stopdefunding.com, which has garnered more than 170,000 signatures from Seattle and beyond, he told the DCNF.

The union bosses in the midst of renewed tensions and months of previous unrest said those seeking careers in law enforcement at this juncture should look elsewhere.

“I think the politicalization of the job of policing is abhorrently atrocious,” Solan said. “That’s probably my biggest take on this.”

“I would probably say that I’d go into something more protected as far as not exposing yourself to be a political cancelled victim just because you’re a police officer on one bad call,” he added.

Slocumb said, “There are a multitude of jobs that pay better that you generally will get home from work on time that you can be off for Christmas and New Years. You’re not going to work midnight to 8 p.m. as a welder or a tradesman.”

Vallelong echoed their sentiments and also said he’s noticed a mass exodus from the NYPD.

“There’s so many people that are leaving this job, which speaks volumes,” he said. “They can say it’s through attrition, but people see the handwriting on the wall, and these are the seasoned veterans who have been on the job for 20 plus years that wouldn’t have left that are now just racing to the exits.”

Solan noticed a similar trend among the ranks of his members. 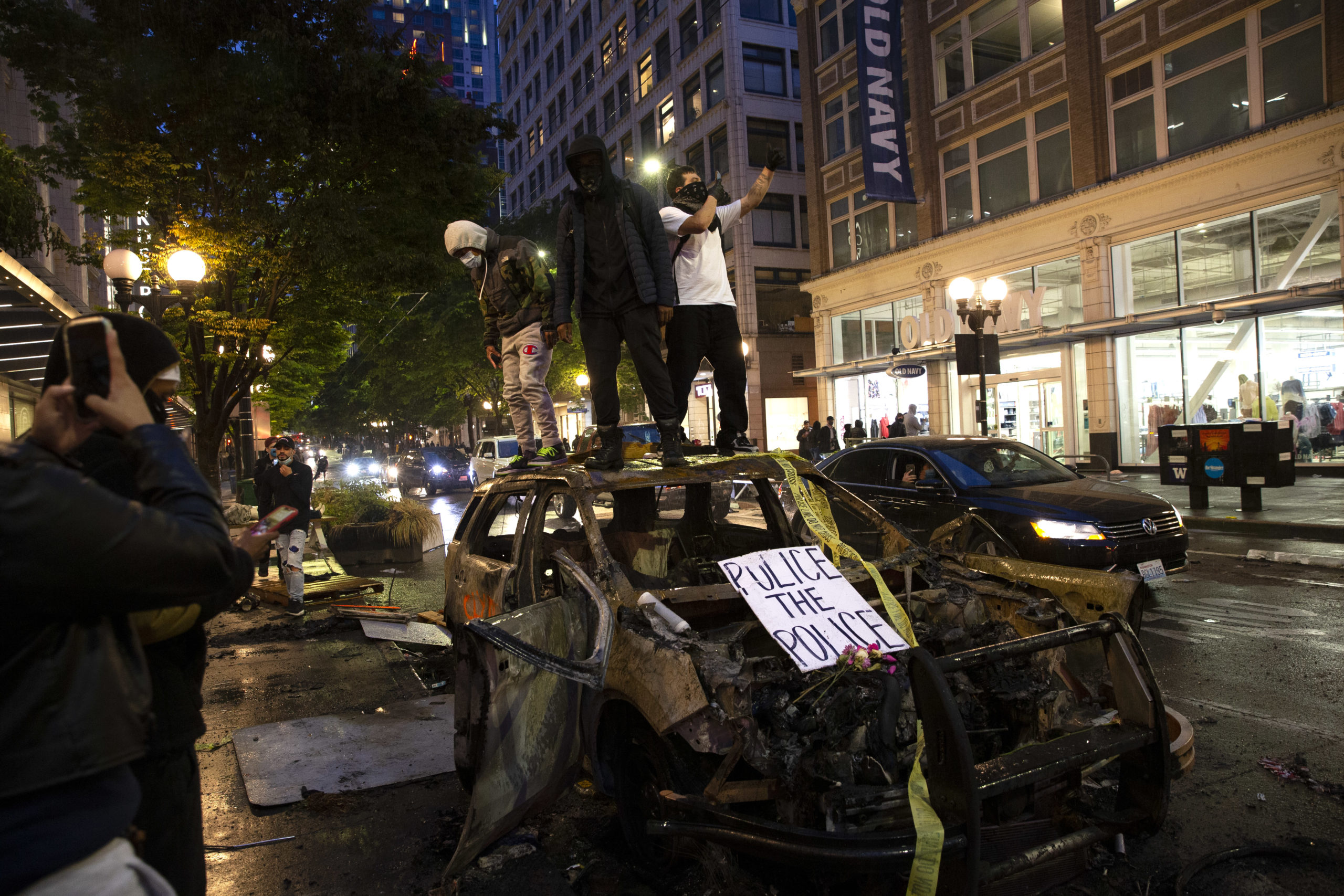 Protesters riot in the streets on May 30 in Seattle. (Karen Ducey/Getty Images)

“People are leaving, people are retiring, people are [leaving] Seattle because we’re not supported by our elected officials — all for political reasons,” he said.

Seattle continues to be one of the riot epicenters in the country, as police recovered numerous knives, spikes and improvised shields in a public park Tuesday, according to the department’s blog. A week prior to the discovery of the dangerous implements, rioters attempted to trap officers inside their own police precinct and burn it down, KIRO 7 reported.

Seattle was also home to the Capitol Hill Organized Protest (CHOP), which claimed 6-blocks of territory surrounding SPD’s East Precinct, according to K5. Solan called the past actions of rioters “mind blowing.”

“We were just reacting and digesting the fact that we couldn’t go into a 6-block area in the city of Seattle where a group of — I would say — socialists/marxist people were in control of a police facility,” he said. “To me it’s mind blowing, it’s so bewildering beyond common sense that I still struggle with thinking this was real in the United States of America.” (RELATED: ‘Morale Is In The Toilet’: Police Union Officials Wouldn’t Want Their Own Sons In Law Enforcement)

The union leaders in the midst of the renewed unrest, decline in morale and perceived abandonment by political figures are seeking to enlist the public’s help in remedying the nationwide turmoil.

“We need those who quietly support us to quit being quiet — to speak up,” Slocumb said.

Solan said, “[People need] to hold our elected officials accountable and hold the mainstream media accountable for dividing our nation. People need to wake up to what’s happening, this is a fight for our Republic.”

Vallelong said, “We probably need the citizens of New York and the citizens in other states in this country to actually go out and vote the right people in office that are not there for their own political self indulgence and are there for the people.”

The NYC police union executive said the actions of late are a “rock bottom” for law enforcement.

“This will take 10 or 15 years maybe to turn around,” he said. “I would not suggest anyone taking this job and this is a job I’ve done now for three decades that I’ve always loved in the good times and the bad, but right now it is really, really rock bottom.”