Their comments follow massive, ongoing demonstrations and riots — many of which condemn law enforcement — alongside calls to defund police departments and prosecute officers accused of misconduct at elevated levels. The anti-police landscape stemmed from the death of George Floyd, a black man who died in May after a white police officer knelt on his neck for over eight minutes, video showed.

“I took this job after my father did, and I will not let my sons take this job,” Sergeants Benevolent Association (SBA) Vice President Vincent Vallelong, who said he has a 19-year-old and a 17-year-old, told the Daily Caller News Foundation.

International Union of Police Associations (IUPA) Vice President Emeritus Dennis Slocumb similarly told the DCNF: “I don’t know one parent who was a cop who wants his kid to be a cop and if that was true 20 years ago, it’s darn true today.”

Slocumb told the DCNF that his son had wanted to be a police officer since he was a toddler. The police union executive said he was relieved when his son decided not to join the force, and he’s especially thankful for that decision today.

Roughly 700 officers nationwide were injured during the peak of the riots, which saw a Minneapolis Police Department precinct torched and a Seattle police precinct abandoned, the Department of Justice estimated in June. Officers have been shot, hit with bricks, run over by ATVs and injured by Molotov cocktails, according to a list compiled by Fox News.

Proponents of police reform argue that there is a serious need for restricting funding to police departments in order to bolster black communities.

“It’s not just about taking away money from the police, it’s about reinvesting those dollars into black communities. Communities that have been deeply divested from, communities that, some have never felt the impact of having true resources,” Patrisse Cullors, a co-founder of the Black Lives Matter movement, told WBUR in early June.

“And so we have to reconsider what we’re resourcing. I’ve been saying we have an economy of punishment over an economy of care,” she continued.

Protesters have also sought to reform police departments through a number of measures, including by holding officers to a higher degree of accountability.

Many proposing these reforms are not encouraging physical aggression against officers, but it’s occurring en mass nevertheless. A recent uptick in violence toward police has severe consequences for morale, the pair told the DCNF.

“Morale is in the toilet,” Slocumb said.

Vallelong said, “[Police are] beaten, they have been fighting with these individuals for the past month and a half with no end in sight. You have to sit there and listen to people taunt you day in and day out. There’s no one there that supports [police].” 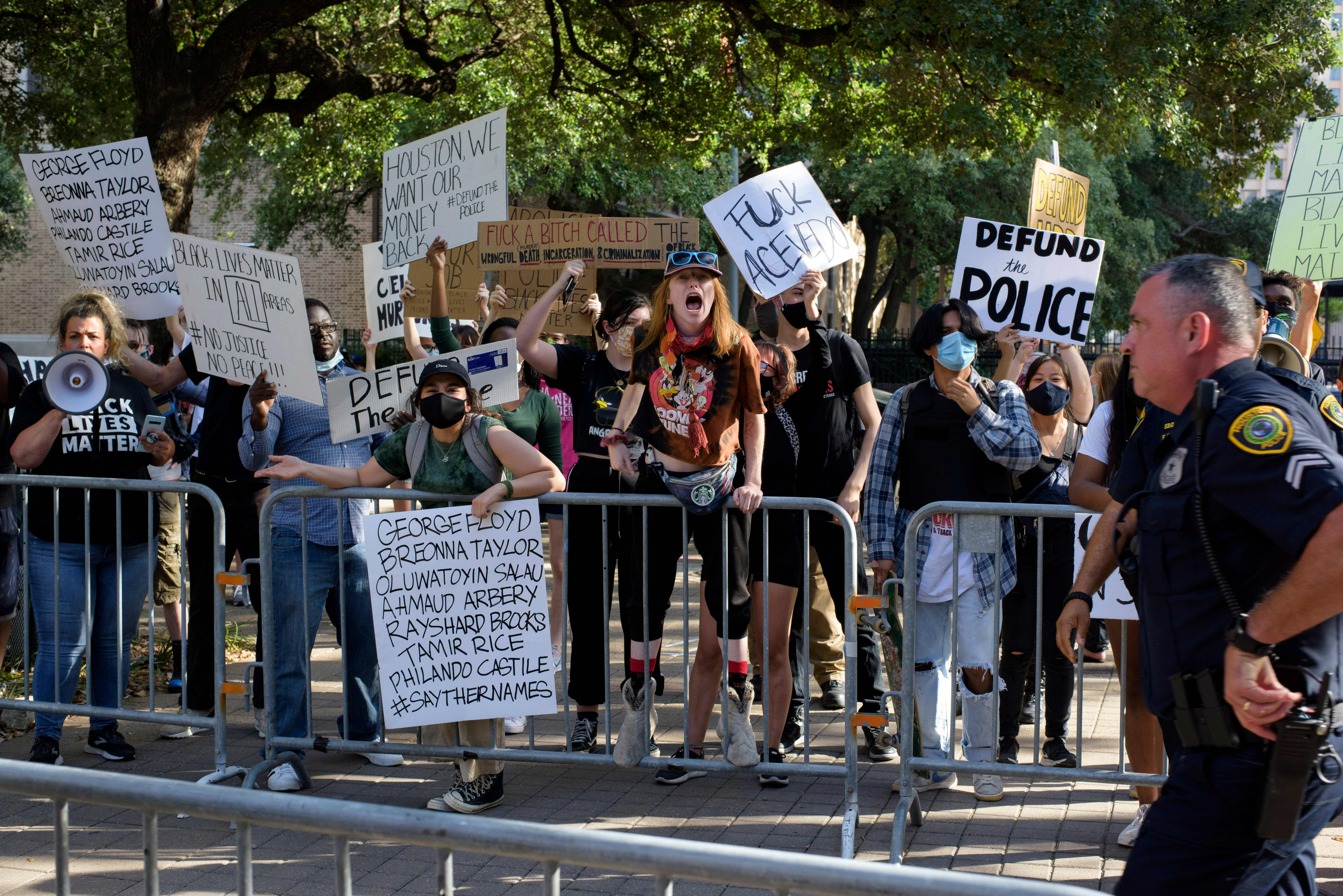 Counter-protesters hold placards and shout during a Police Appreciation rally at the City Hall in Houston, Texas on June 18, 2020. (Photo by MARK FELIX/AFP /AFP via Getty Images)

“Let’s throw the police under the bus because right now, that’s the flavor of the week,” he continued. “Everyone hates the police.”

The pair said things have gotten so volatile for police that they’d outright discourage anyone from becoming a police officer until the situation becomes safer.

“I would tell them to stay clear,” Vallelong said. “This is not a place for anyone to have any type of security when it comes to a career.”

“It’s just a thankless, god-awful job right now,” Slocumb said. “I would tell them to just go into the fire department or become a truck driver or something.”

Vallelong, who’s based in NYC, said that some officers came to work and, instead of clocking in, walked themselves to the pension office and put in their resignation.

Democratic New York City Mayor Bill de Blasio has spearheaded several changes to the NYPD following the nationwide race-based demonstrations. The mayor pushed proposals to strip the department of over $1 billion in funding on July 1, and disbanded an anti-crime plainclothes police unit in June.

New York City has subsequently seen an increase in violent crime. Nearly 40 people were shot in the city over the Fourth of July weekend, and June 2020 was the bloodiest June the city has seen in 24 years, according to the New York Post.

Vallelong said local politicians don’t share the same interests as police officers and are preventing them from doing their job.

Police “can’t do their job,” he told the DCNF. “They have — for lack of a better word — ball-less leadership. Everyone’s afraid to take action against the mayor.” 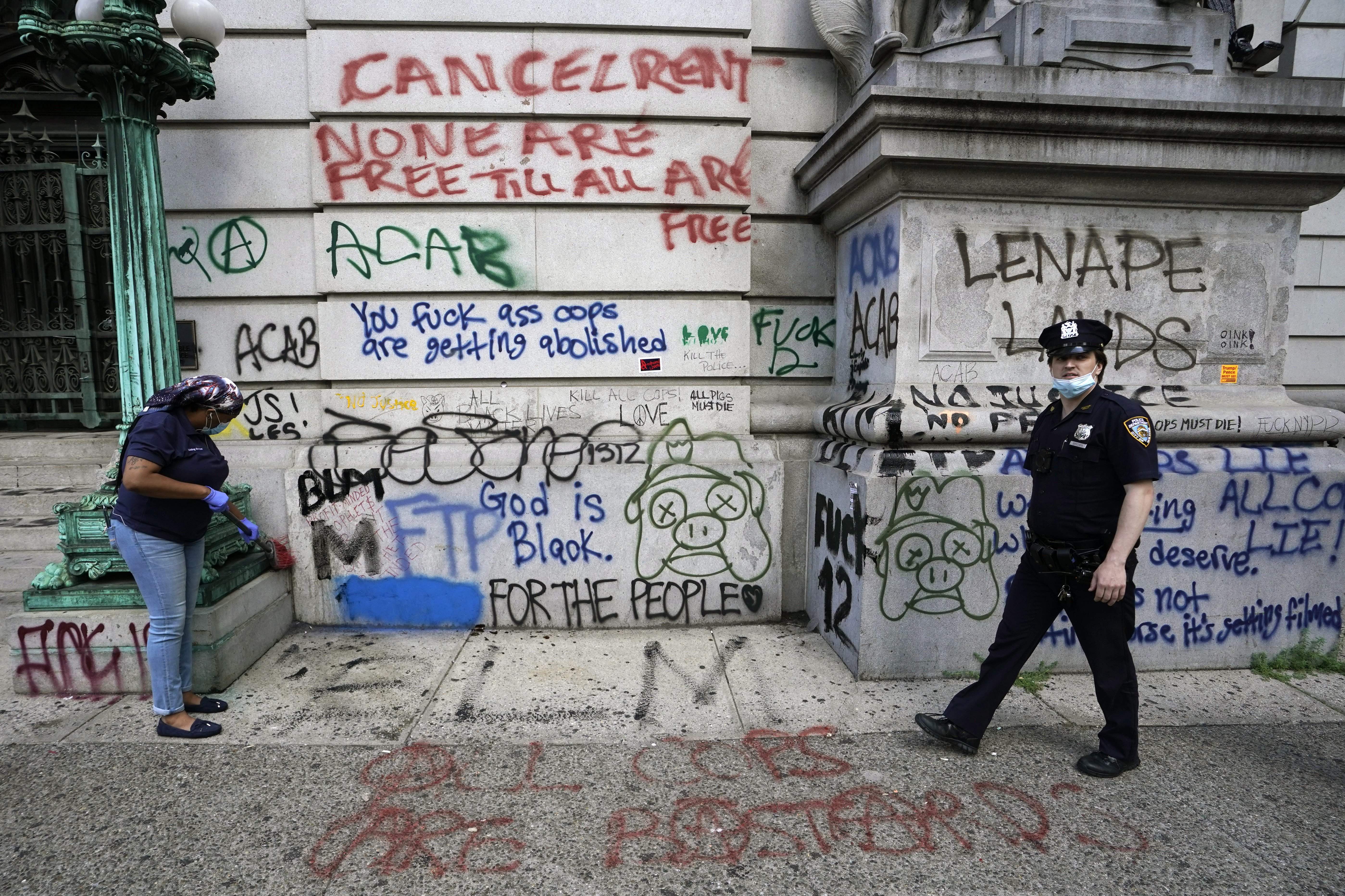 A city worker cleans up the street in front of a New York City government building on July 1, 2020 across the street from the Black Lives Matter protesters, as they congregate at City Hall across from One Police Plaza as part of the “Defund NYPD” and “Occupy City Hall” movement. (TIMOTHY A. CLARY/AFP via Getty Images)

Slocumb, a 32-year veteran of the Los Angeles County Sheriff’s Department, agrees that police officers are struggling to do their jobs, but speculated about another trend.

“Frankly I think a lot of police officers are scared to death to do any self-initiated crime prevention,” Slocumb said. “I mean if you see guys hanging out on the street corner at 3 o’clock in the morning, the policeman in you wants to stop and see what’s going on, but when you think of what could happen — someone could run, someone could pull a gun, you might find dope, and the guy resists arrest and you have to use force — it’s better to just keep on driving.”

A number of law enforcement officers have faced charges for excessive force. Two Atlanta officers were charged — one of whom faces the death penalty — following the June death of Rayshard Brooks, who who was shot multiple times after he resisted arrest and allegedly stole an officer’s taser, according to NBC News.

“[Police are] working the same area for a period of time, and they take pride in trying to keep it safe,” the former LA deputy said. “I hear guys saying over and over ‘not in my area that ain’t going to happen’. And now, they’re fearful of taking action to even prevent it and that just hurts.”

Slocumb said police can’t just shrug off a sharp decline in morale and that it has unforeseen consequences to public safety.

“I mean the fact that morale is down, you can just say ‘well, cowboy up,’ but the off shoot of that is that you’re having a lot more retirements, a lot more sick calls, communities less protected, not more protected,” Slocumb said.

The consequences of the anti-police movement has left deep wounds on policing in America, Vallelong told the DCNF.

“There’s no respect on the street anymore, which is going to take a lot of time to get back,” he said.