“GOP politicians are jumpstarting a Netflix boycott in response to the film ‘Cuties,’ which denounces the hyper-sexualization of young girls on social media,” the tweet said. “Their stance is linked to a child sex trafficking conspiracy theory central to the QAnon movement.” (RELATED: EXCLUSIVE: GOP Lawmakers Call On Justice Department To Take Legal Action Against Netflix For Sexualizing Children)

Axios also updated the story that accompanied the deleted tweet linking criticism of “Cuties” to QAnon conspiracy theories focusing on child sex trafficking. The story appeared under the headline “Netflix faces its QAnon moment as lawmakers push to investigate ‘Cuties.'”

Many theories in the QAnon movement involve the idea that the world is run by pedophiles and satanists that are opposed to President Donald Trump.

The Axios story also said that the Netflix film “denounces the hyper-sexualization” of little girls.

A review of the movie by the Daily Caller News Foundation found that “Cuties” not only includes many close up shots of little girl’s crotches and buttocks, but also shows little girls viewing pornography and discussing sexual acts, and shows one girl photographing her genitalia, among other explicit scenes. (RELATED: We Watched Netflix’s ‘Cuties’ So You Don’t Have To) 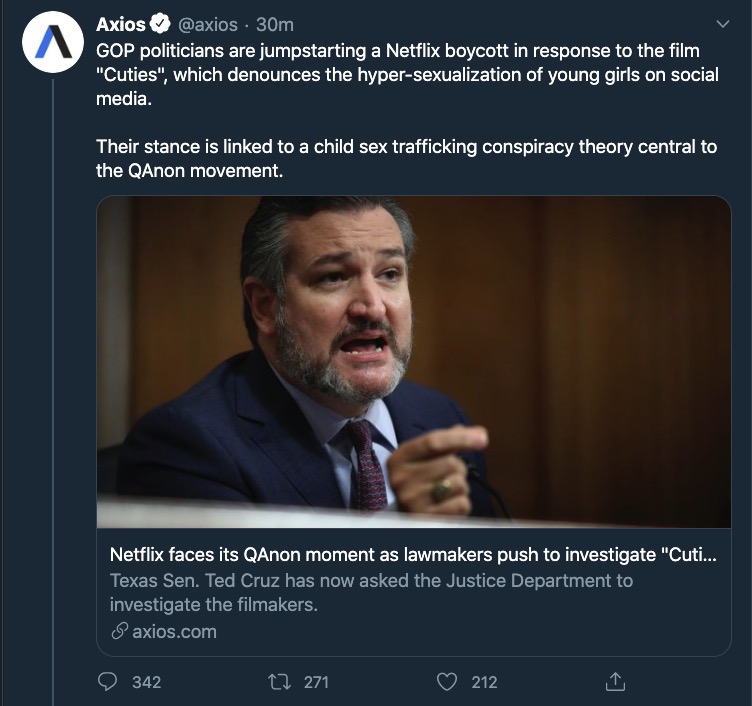 Axios deleted the tweet and updated the story to remove all references to QAnon, adding the editors note: “This story was updated after publishing to remove references to the QAnon conspiracy theory.” (RELATED: ‘A Training Film To Market And Seduce Children’: Child Advocates Condemn Netflix’s ‘Cuties’)

The story’s new headline reads: “Republicans target Netflix over ‘Cuties.'” Axios did not update the language the publication used to describe the film itself.

The publication did not immediately respond to a request for comment from the Daily Caller News Foundation.