The late Supreme Court Justice Ruth Bader Ginsburg in 2016 said “nothing in the Constitution” prevents a president from nominating to fill a court seat.

Ginsburg was reacting to the upcoming fight over a replacement for her friend and colleague Justice Antonin Scalia, who passed away. Then-President Barack Obama had nominated Judge Merrick Garland to fill Scalia’s seat only to be denied a Senate hearing by Majority Leader Mitch McConnell.

“I think he is about as well qualified as any nominee to this court,” Ginsburg said of Garland, according to a July 2016 report from The New York Times. “Super bright and very nice, very easy to deal with. And super prepared. He would be a great colleague.” 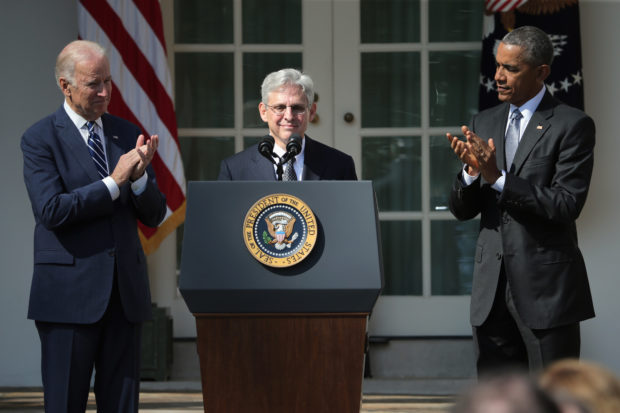 WASHINGTON, DC – MARCH 16: U.S. President Barack Obama (R) and Vice President Joe Biden (L) stands with Judge Merrick B. Garland (R), while nominating him to the US Supreme Court, in the Rose Garden at the White House, March 16, 2016 in Washington, DC. (Photo by Chip Somodevilla/Getty Images)

The Times called her answer “immediate” when asked if the “Senate had an obligation to assess Judge Garland’s qualifications.”

“That’s their job,” Ginsburg told the outlet then. “There’s nothing in the Constitution that says the president stops being president in his last year.”

Ginsburg, who passed away Friday after battling metastatic pancreatic cancer for years, reportedly expressed the wish that her replacement wouldn’t be confirmed until a new president is installed. (RELATED: ‘Keep Your Powder Dry’: McConnell Tells GOP Senators To Be Cautious About Taking A Position On SCOTUS Nomination)

BREAKING NEWS from @NPR : Ruth Bader Ginsburg died Friday at age 87 from complications of cancer.
In a statement dictated to her granddaughter Clara Spera days before her death, she said, “My most fervent wish is that I will not be replaced until a new President is installed.”

“My most fervent wish is that I will not be replaced until a new president is installed,” Ginsburg said.

McConnell has indicated that he will bring any potential Supreme Court nominee to a vote, but it is unclear whether he would have enough support within the GOP caucus to confirm.