Democratic presidential candidate Joe Biden has touted President Barack Obama’s orchestration of the auto bailout as a major success during his campaign, but several experts have said that Biden’s version of the bailout is misguided and “exaggerated.”

“President Obama and I rescued the auto industry and helped Michigan’s economy come roaring back,” Biden tweeted on Sept. 9.

Biden also stated that the Obama-Biden administration “rescued” the auto industry and helped it “re-tool” in a Sept. 14 speech. Further, he said the administration saved 646,000 auto jobs in a July 2019 tweet. Auto production doubled in the U.S. as a result, he added.

During the 2008 Great Recession, the three major U.S. automakers – General Motors (GM), Chrysler and Ford – each experienced significant declines in sales, according to a Reuters timeline. Obama formed a presidential task force in February 2009 led by Timothy Geithner, secretary of the Department of the Treasury, and Lawrence Summers, director of the National Economic Council, which was devoted to keeping the U.S. auto industry afloat, The New York Times reported at the time.

However, the bailout didn’t save the U.S. auto industry, but transferred tens of billions of taxpayer dollars to the United Auto Workers (UAW) union, according to experts.

“The main thing that happened is that rather than letting the courts go through their usual procedures, which probably would’ve led to a relatively big hit to the union, the federal government put taxpayer money in and cushioned the hit to the union,” Jeffrey Miron, director of economic studies at the Cato Institute, told The Daily Caller News Foundation.

Miron, who is also the director of Harvard University’s undergraduate department of economics, added: “Government should let failing companies go into bankruptcy.”

In the years preceding the recession, U.S. automakers were steadily ceding ground to foreign companies, which were making more durable and higher-quality cars, according to Miron.

In fact, the market shares of GM, Chrysler and Ford all declined in the early 2000s, according to a 2015 Princeton University report. While the three automakers accounted for 71% of U.S. vehicle sales in 1998, the companies accounted for 47% by 2008. (RELATED: Conservative Group’s Ad Calls Out Obama’s ‘Chinese Motors’ Auto Bailout)

“A number of factors had taken a toll on the demand for cars from the Big Three manufacturers over time: the widespread perception of perennial quality and reliability issues, lower resale values, poorly received new models, and a lack of low gas mileage cars at times of rising fuel costs,” the report said.

U.S. companies were also paying higher wages and benefits to employees than competitors due to restrictive labor agreements, Miron said. 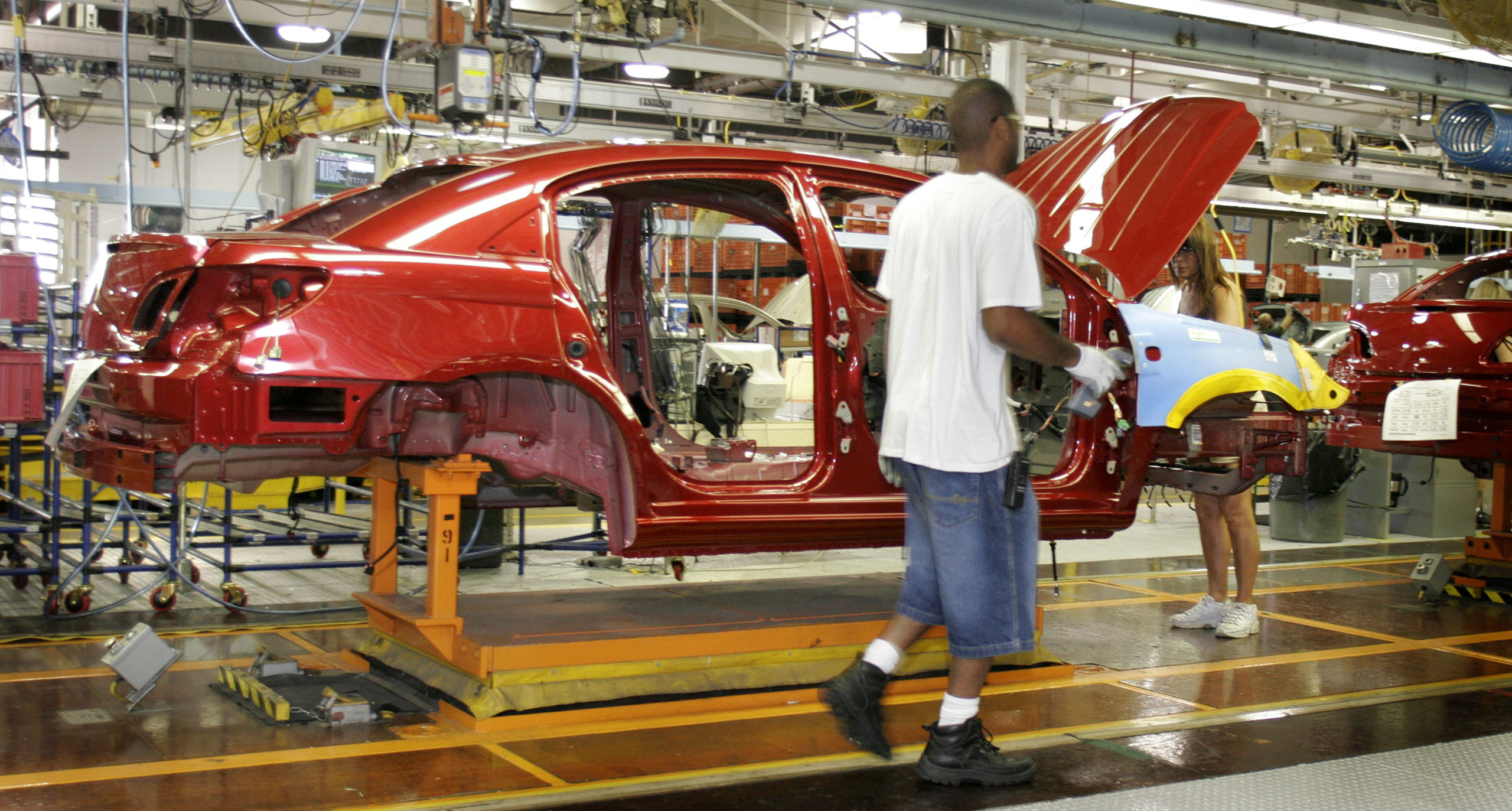 The so-called “jobs bank” was a particularly costly labor provision that GM attempted to free itself from in 2006, according to The New York Times. The “jobs bank,” created in 1984 when GM alone had a nearly 50% share of the U.S. auto market, was a pool of idle employees being paid full salary and benefits even if they didn’t have work to do.

The UAW had also negotiated a deal with the automakers, which said workers on layoff must be paid 95% of their salary, according to the Princeton report.

“The auto industry has long-standing generosity toward its unions and is paying its unions substantially more in wages than is being paid to new non-union factories emerging in the U.S.,” Miron said. (RELATED: Emails: Obama officials enriched former firms, possibly themselves with auto bailout)

When the recession finally hit, U.S. automakers suffered more than foreign automakers, according to a May 2009 Congressional Research Service report. Year-over-year auto sales of Chrysler, GM and Ford declined by 61%, 49%, and 35% respectively in the first four months of 2009 while Nissan, Toyota and Honda dropped 32%, 28%, and 26%, respectively.

The Great Recession, which had been the most significant economic downturn in the U.S. since the Great Depression, lasted from December 2007 until June 2009, according to The Center on Budget and Policy Priorities. The recession created an unprecedented jobs deficit – change in nonfarm payroll employment dipped by 6% – that had not been seen in any of the recessions that preceded it.

“In any recession, producers of durable goods take the biggest hits because durable goods, whether they are owned by consumers or owned by businesses, are durable – you can keep using whichever one you currently have when the recession hits,” Miron told the DCNF.

“So you can always expect the auto industry to take a big hit during a recession.” 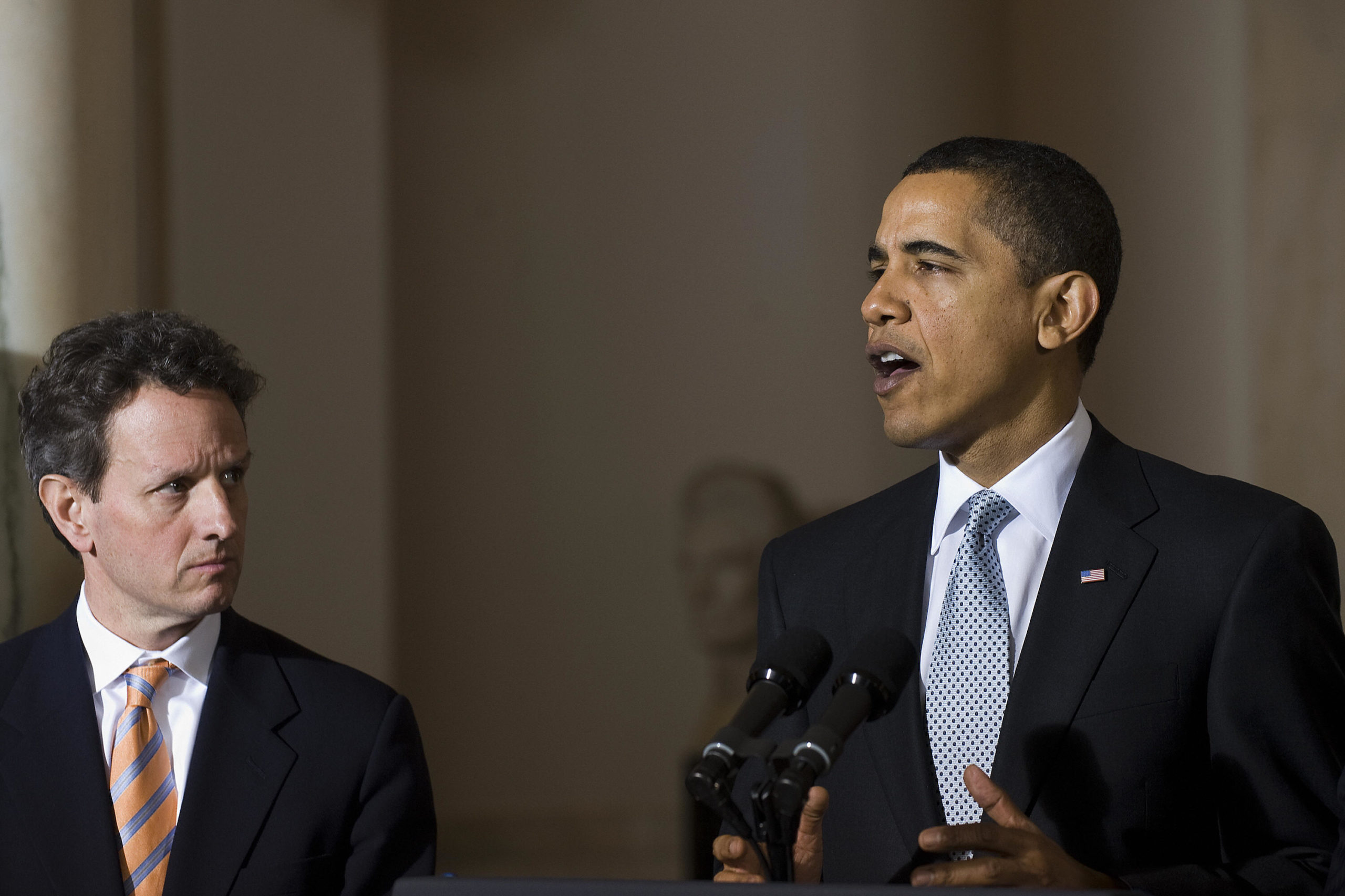 US President Barack Obama announces the terms of the latest auto industry bailout at the White House in Washington, DC, March 30, 2009, with US Treasury Secretary Timothy Geithner. (Jim Watson/AFP via Getty Images)

Facing enormous financial issues and poor sales, GM and Chrysler turned to the federal government, according to the Princeton report. While Ford had significant losses, it turned down government support since it had privately borrowed enough money in 2006 and began restructuring before the recession.

“The last thing I want to see happen is for the auto industry to disappear, but I’m also concerned that we don’t put $10 billion or $20 billion or $30 billion or whatever billion dollars into an industry, and then, six months to a year later, they come back hat in hand and say, ‘Give me more,'” Obama said on NBC’s “Meet the Press” in December 2008, one month before he assumed office.

When Obama assumed the presidency in January, one of his first tasks was to address the auto crisis with Geithner and Summers leading the presidential task force, according to The Times.

GM and Chrysler approached the Obama administration in February 2009 with new proposals, the BBC reported. They requested an additional $21.6 billion from the federal government. 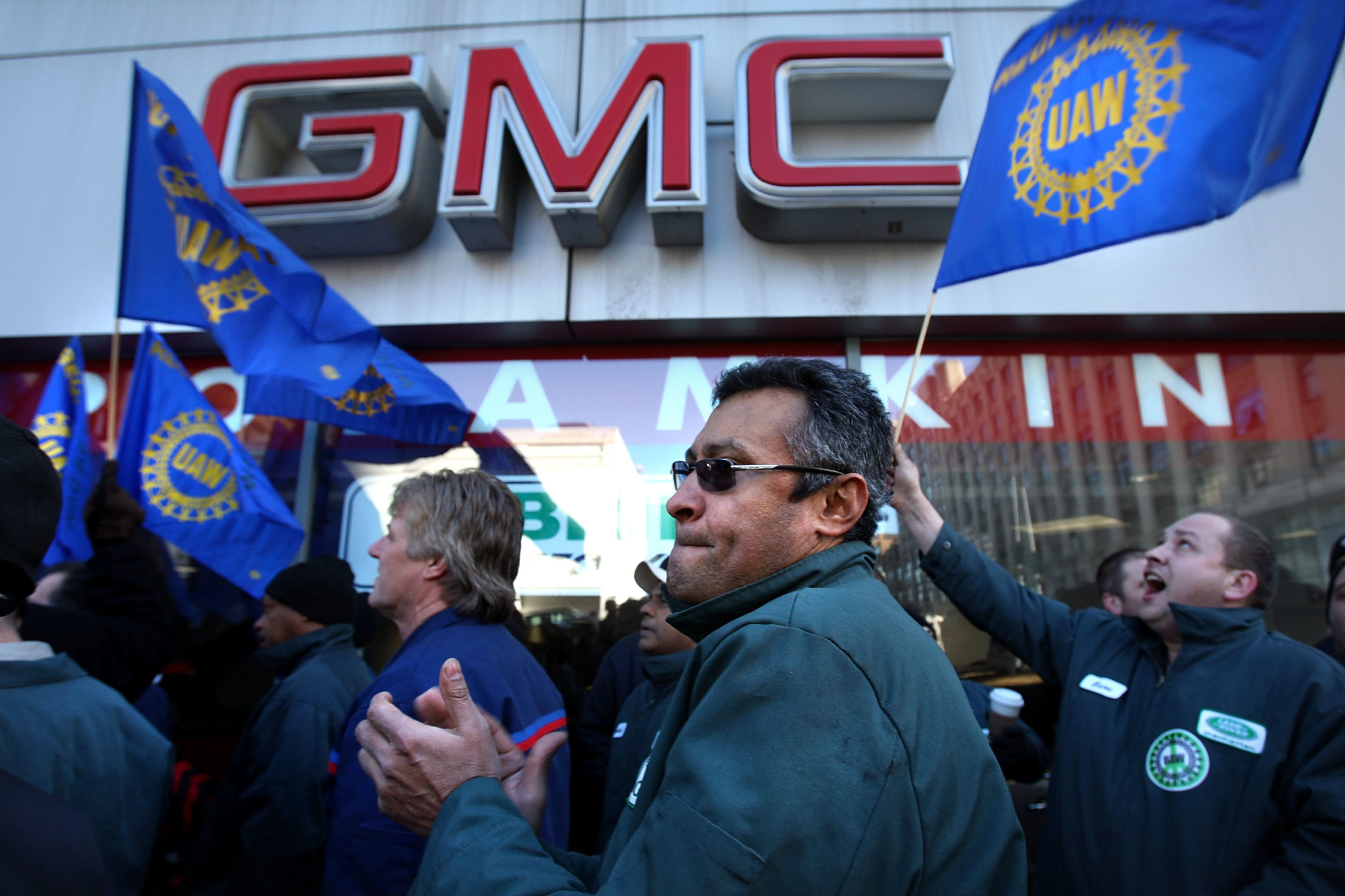 Dozens of area auto dealership employees, members of the United Auto Workers (UAW) and mechanics from both foreign and domestic car makers, rallied in support of the government bailout of the domestic auto industry December 8, 2008 in New York City. (Spencer Platt/Getty Images)

By June, more than $80 billion taxpayer dollars had been given to Chrysler and GM, Fox Business reported. That accounted for more than 10% of the Troubled Asset Relief Program money, which had been allotted by Congress in 2008 that was mainly intended for banks.

In the meantime, ownership of the companies experienced a massive overhaul: the federal government now had a 60% stake of GM, BBC reported, and UAW received a 55% stake of Chrysler, according to The Times. (RELATED: MIX: Trump’s Labor Department Just Moved To Bring More Transparency To Labor Unions)

“It was a government-organized bankruptcy, courts supervised the bankruptcy and the government put money into the pot,” Miron told the DCNF.

While bankruptcies generally hurt unions, the Chrysler bankruptcy was the “Cadillac” of bankruptcies for the UAW, according to The New York Times. In addition to receiving a majority stake of the automaker, UAW received protection from the Treasury Department for its pension and health plans.

“The Obama Administration is abusing bankruptcy law to benefit a favored constituency, the United Auto Workers union,”  Andrew Grossman, a legal scholar who had been a senior legal policy analyst at The Heritage Foundation, said at a 2009 House Judiciary hearing. “This threatens serious consequences.” 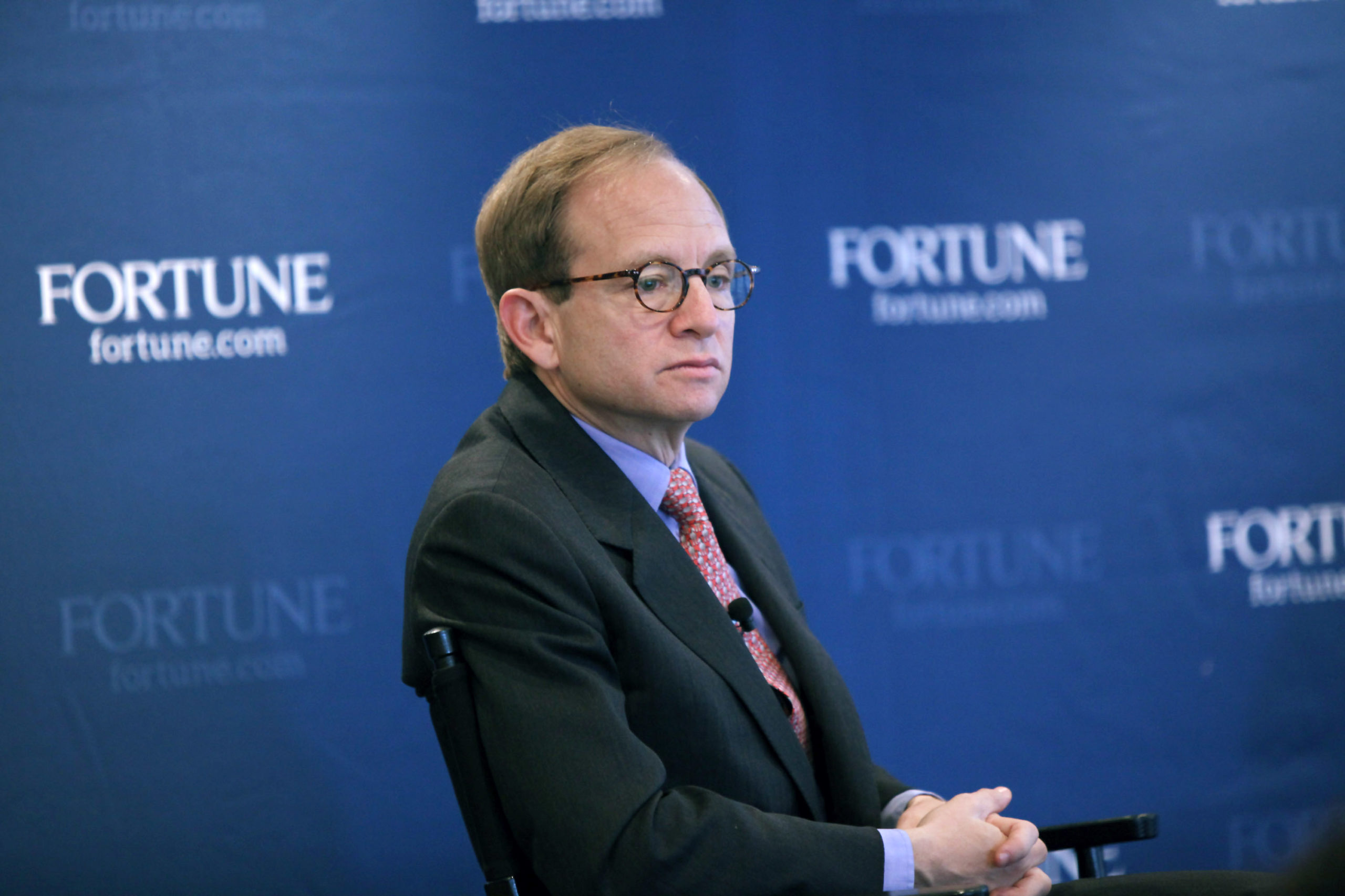 The White House figured “it could bail out Chrysler and General Motors for far less money than would otherwise be required – essentially by forcing others to pay for much of it – without relinquishing its effective control of either company or forcing favored constituencies, unions chief among them, to accept serious concessions,” Grossman said.

Although the automaker agreed to shut down dealers and car brands to save money, Grossman said they didn’t agree to do enough. Questions would have been asked to these companies about dealerships counts and brand sustainability if they had gone through a normal Chapter 11 bankruptcy without government intervention, he said. (RELATED: Auto Workers Strike Against GM Comes As Union Leaders Face Corruption Investigation)

The auto bailout cost taxpayers a total of $23 billion, legal scholars James Sherk and Todd Zywicki wrote in a 2012 Heritage Foundation report. On top of the direct cost to taxpayers, the Obama administration created subsidies for UAW costing $26.5 billion, more than the U.S. foreign aid budget in 2011.

“The Administration did not need to lose money to keep GM and Chrysler operating,” Sherk and Zywicki said. “The Detroit auto bailout was, in fact, a UAW bailout.” 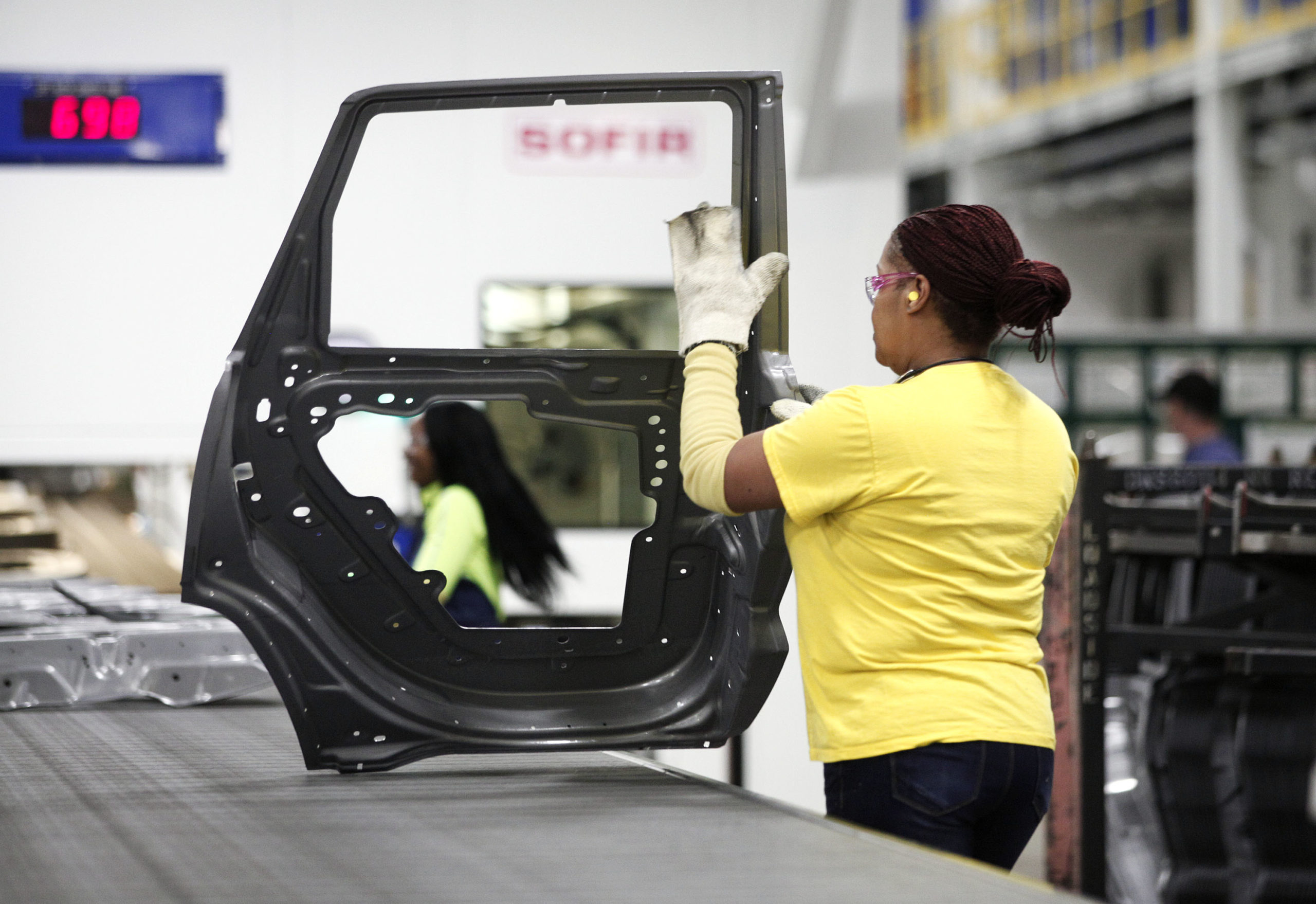 A Chrysler worker handles a door in Warren, Michigan in 2016. (Bill Pugliano/Getty Images)

Existing union members were not made to take any pay cuts at GM despite the fact that bankruptcy typically brings wages down, Sherk and Zywicki said. Beyond wages, union members’ benefits escaped the bailout unscathed as well. (RELATED: ‘Campaign Against Working Families’: Three Major Unions Sue Michigan Over New Labor Laws)

The entire net taxpayer loss of $23 billion stemmed from the subsidies granted to UAW pay and benefits accounts, according to Sherk and Zywicki. One of the reasons Congress didn’t approve an auto bailout in 2008 was the UAW’s refusal to consider lowering pay and benefits to rates comparable to competitors.

Stephen Rattner, the economist who became the Obama administration’s “car czar” leading the bailout effort, admitted in 2011 that the bailout didn’t ask the union and auto companies to sacrifice enough, according to Michigan Live. He said GM shouldn’t have received as much money from the government that it did and that the UAW should have been asked to make more concessions.

“I think we could have done a little bit better job – particularly at GM – in combing through the mess of liabilities and contracts and things they had if we had a little bit more time,” Rattner said Michigan live reported. 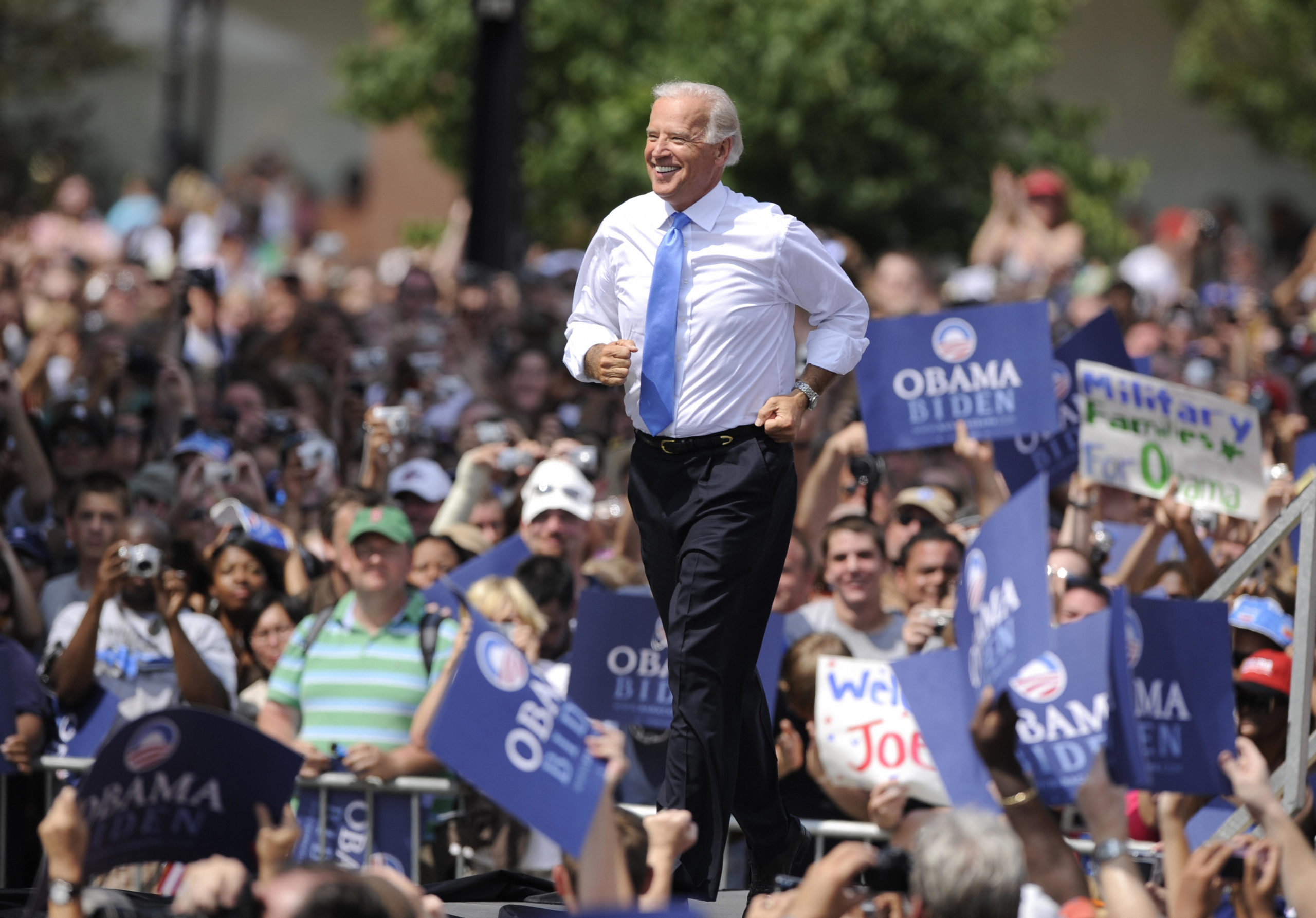 However, some have defended the bailout. Sergio Marchionne, the chairman and chief executive of Chrysler during the recession, said at a 2014 event hosted by the Brookings Institution that there would have been a disastrous chain effect if not for the bailout.

“The financial system was absolutely incapable of digesting anything, never mind a bankruptcy, of this caliber,” Marchionne said, according to Brookings. “The failure of GM and the failure of Chrysler would have sent the supplier base into absolute convulsions and if that happened it would have stopped making parts for Ford.”

“So you would have had a chain effect that would have just destroyed the U.S. automotive business completely. So don’t look for alternative solutions. There were none.”

Speaking at the same event, Summers said the federal government struck a good balance between restrictiveness and leniency, according to Brookings. The fact that the government was able to remove itself from the management of the automakers after the bailout proved that it was a success, Summers added.

“It could have turned out that a Democratic administration was incapable of keeping hands off,” Summers said, according to Brookings. “And the process of government involvement through bankruptcy could have led to all kinds of new government-mandated labor arrangements.”

“And automobile companies could be being operated as public utilities in some sense.”

But, Miron rejected the idea that the Obama administration saved the auto industry and hundreds of thousands of jobs, which Biden has been repeating on the campaign trail.

“Did it save the U.S. auto industry? Probably not. It shifted who paid for the mistakes, the loss in profits that the industry was experiencing,” Miron said. “Had it gone through standard bankruptcy instead of this government bankruptcy, the companies would have continued to operate.”

Miron pointed out that many large companies have gone through bankruptcy in the past. For example, airlines have declared bankruptcy, are bought and sold, but still continue flying. Miron said the government’s involvement in the auto bailout was a mistake since it shifted some of the cost away from unions and to the taxpayer.

Regarding the number of jobs that were supposedly saved, Miron called it an “exaggeration.”