Former FBI Director James Comey will testify Wednesday before the Senate Judiciary Committee about his role in Crossfire Hurricane, the investigation of the Trump campaign.

Much has been learned about the probe since Comey last appeared on Capitol Hill. His last public testimony was on June 7, 2017, before the Senate Intelligence Committee. He appeared for closed-door depositions in the House in December 2018.

Since then, the special counsel has released a report finding that there was insufficient evidence that the Trump campaign conspired with Russia to influence the 2016 election, which was the initial focus of the Crossfire Hurricane inquiry.

A slew of declassified documents has also called into question certain aspects of the investigation, many dealing with the bureau’s handling of the Steele dossier.

Comey, who was fired as FBI chief on May 9, 2017, is likely to be grilled Wednesday about his decisions during the Trump-Russia probe regarding the Steele dossier and an investigation of former National Security Adviser Michael Flynn.

Comey is also likely to face questions about his lobbying effort to include portions of the dossier in an Obama administration Intelligence Community Assessment (ICA) regarding Russia’s election meddling efforts.

Sen. Lindsey Graham, the chairman of the Judiciary panel, has said that he will quiz Comey about the FBI’s knowledge of problems with the dossier, which the FBI cited extensively in applications to get surveillance warrants against Trump campaign aide Carter Page.

Here are 10 questions that Comey could face during the hearing.

What did Comey know about the Steele dossier’s primary source, Igor Danchenko?

According to an FBI memo declassified and published last week, the FBI opened a counterintelligence investigation against Igor Danchenko, the primary source for dossier author Christopher Steele, in 2009.

Danchenko, a Russia analyst, had contact in 2005 and 2006 with known Russian intelligence officers, according to the FBI memo.

The FBI’s Crossfire Hurricane team learned of the investigation of Danchenko in December 2016, but continued to rely on the dossier for its investigation of the Trump team. The bureau obtained three additional Foreign Intelligence Surveillance Act (FISA) warrants against Carter Page after December 2016.

According to Graham, the allegation that Danchenko might have been a Russian agent raised the likelihood that Russian disinformation was planted in the dossier. But Graham noted that the bureau did not disclose the investigation of Danchenko to the FISA Court.

Comey said in an interview last week on CNN that he had not read the FBI memo about Danchenko, but that he would review it prior to the Senate hearing.

What did Comey know about Danchenko’s FBI interviews?

An FBI special agent and an FBI supervisory intelligence analyst interviewed Danchenko over the course of three days in January 2017.

The IG report says that Danchenko’s statements raised questions about the reliability of the dossier, yet that assessment was not included in the two FISA warrants sought after the interviews.

Danchenko told investigators that he provided Steele with unverified rumors of Trump and his associates’ activities. He said that Steele portrayed some of the information as having been verified when it wasn’t.

Despite the red flags about the dossier, news outlets continued through 2017 to report that parts of the document had been verified. The FBI did not intervene to correct the narrative.

The IG report is unclear about how far up the chain Danchenko’s statements went at the FBI.

Peter Strzok, who served as deputy chief of counterintelligence, oversaw most of the Crossfire Hurricane investigation. According to the IG report, then-FBI Deputy Director Andrew McCabe was briefed more frequently on the investigation than was Comey.

Why did Comey fight so hard to use the dossier in the ICA?

Comey and McCabe spearheaded the effort to include information from the dossier in the ICA, according to the IG report and testimony provided to the Senate.

Former CIA Director John Brennan told the Senate Intelligence Committee that the agency “pushed back” aggressively against Comey to try not to include the dossier in the ICA.

A CIA analyst told the Senate Intelligence Committee in 2017 that CIA and FBI had a “bitter argument” over whether to put the dossier in the ICA, according to a Senate report.

The IG report said that one CIA analyst opposed relying on the dossier because it read like “Internet rumor.”

Comey, McCabe and others at the FBI initially wanted details from the document placed in the body of the report, but eventually settled on using it as a two-page annex to the full ICA.

By the time the Obama administration released the ICA on Jan. 7, 2017, the FBI had several pieces of evidence that raised questions about the dossier.

Investigators had not only learned about the prior investigation of Danchenko, but the FBI’s two top counterintelligence officials, Bill Priestap and Peter Strzok, had spoken with several of Steele’s former colleagues in the United Kingdom who raised questions about the ex-spy’s judgement.

Steele had also cast doubt in an interview with the FBI in early October 2016 about one of the alleged sources for the dossier. According to the IG report, Steele told the FBI that the source was a “boaster” and “egoist.”

The FBI had also ended its relationship with Steele on Nov. 1, 2016, after he revealed his relationship to the bureau to a reporter who published a story about allegations in the dossier.

It is unclear which of those details Comey knew of when he pushed to include dossier information in the ICA.

Why did Comey use briefings for Trump and Flynn to collect evidence for Crossfire Hurricane?

According to IG reports, Comey and other FBI officials used briefings provided to Donald Trump and Michael Flynn to collect evidence for the Crossfire Hurricane probe.

The IG report says that FBI leaders approved using FBI agent Joseph Pientka to collect evidence during a defensive briefing for then-candidate Trump and Flynn in mid-August 2016. The report says that the FBI wanted to assess Flynn’s demeanor as part of the Crossfire Hurricane investigation.

Comey also used a briefing he gave to Trump on Jan. 6, 2017 to collect evidence for the counterintelligence probe, according to IG report released in August 2019.

Comey briefed Trump about the Steele dossier’s unverfied allegation that the Kremlin had video of Trump with prostitutes in Moscow in 2013.

Comey told the House Oversight Committee in December 2018 that the purpose of the briefing was to “alter the incoming President” that the allegation was likely to be reported in the media and that Trump should be aware of it beforehand. (RELATED: Comey Used Trump Briefing To Collect Evidence For Russia Probe, IG Report Says)

But according to the IG report, Comey used the briefing for a different reason.

FBI officials decided that Comey would document “salient details” of his conversation with Trump. Comey also directed investigators to include a memo he wrote after the meeting because it was “central to investigative activity.”

Comey has not publicly addressed his inconsistent statements about the purpose of the Trump briefing.

The Justice Department in January 2020 invalidated two of the four FISA orders granted against Carter Page because of the FBI’s numerous errors.

Comey signed three of the four FISA warrants, including one that the DOJ has invalidated. Other signees of warrants — former Deputy Attorneys General Rod Rosenstein and Sally Yates — have both said that they would not have signed the warrants in light of the revelations about the Steele dossier.

Comey has not said whether he would still sign off on the warrants, though he will likely have the opportunity to weigh in on Wednesday.

What did Comey know about possible disinformation in the Steele dossier?

The IG report said that the FBI received evidence in January and February 2017 that Russian intelligence operatives may have fed disinformation to Steele, a former MI6 officer.

The report said that Steele’s allegations that former Trump lawyer Michael Cohen met with Kremlin officials, and that the Russian government had blackmail material on Donald Trump, may have been Russian disinformation.

The IG report does not go into detail about the FBI’s assessment regarding disinformation. It is unclear who all at the FBI was aware of the possibility that disinformation was fed to Steele.

Comey does not appear to have updated Trump about the possibility of Russian disinformation being fed to Steele.

When did FBI learn that allegations about Michael Cohen were inaccurate?

The FBI reportedly knew by mid-2017 that the dossier’s most specific allegation of Trump-Russia collusion was false, but did not communicate that information to the public or Congress.

The IG report said that the FBI received evidence on Jan. 12, 2017, that the allegations about Cohen might have been Russian disinformation.

It is unclear exactly how the FBI determined that the Cohen allegation was false.

What are Comey’s thoughts on statements by FBI Special Agent William Barnett, who questioned the basis of the Flynn investigation?

William Barnett, the FBI’s lead agent on the Flynn probe, told U.S. Attorney Jeffrey Jensen earlier this month that the predicate of the Flynn investigation was “not great.”

Barnett’s internal FBI messages show that FBI officials planned to shut down the Flynn portion of Crossfire Hurricane as early as Nov. 8, 2016. Barnett told a colleague that he was “glad” that the investigation was coming to an end. But Barnett’s celebration was premature, as the FBI kept the investigation open.

Whose idea was it to investigate Michael Flynn for Logan Act violations?

The FBI was poised again as of Jan. 4, 2017 to shut down its open counterintelligence investigation against Flynn. But the bureau kept the probe open after receiving a transcript of Flynn’s phone call on Dec. 29, 2016 with Russian ambassador Sergey Kislyak.

FBI documents and other testimony show that the bureau began investigating whether Flynn violated the Logan Act during his calls with Kislyak, in which they discussed the U.S.’s expulsions of Russian diplomats over election hacking.

The Logan Act has never been successfully prosecuted in U.S. history. Flynn’s defenders have claimed that the FBI used the law to justify keeping open its investigation of Flynn and conducting the White House interview that led to charges against him.

What does Comey believe are the appropriate punishments for FISA abuse at the FBI?

Prior to the release of the IG report, Comey adamantly denied that the FBI did anything wrong in the Crossfire Hurricane probe or in its pursuit of FISAs against Carter Page.

He was forced to revise the statement after the IG report came out. 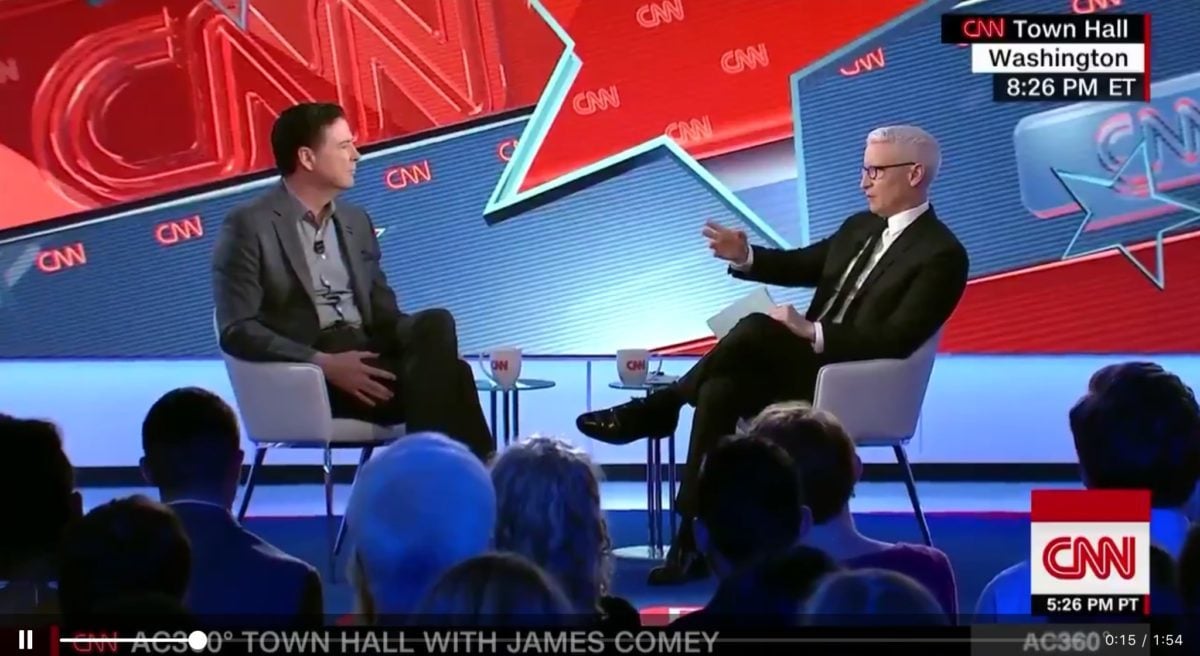 Comey accepted responsibility for the failures, but chalked them up to “sloppiness” rather than something more nefarious.

“I was overconfident in the procedures that the FBI and Justice had built over 20 years. I thought they were robust enough,” Comey said in an interview on Fox News on Dec. 15, 2019.

Comey has not said what the appropriate punishment should be, if any, for all of the FBI’s omissions and errors in the Crossfire Hurricane probe.

The inspector general referred FBI personnel discussed in the report to the FBI’s Office of Professional Responsibility (OPR) for an internal investigation.

Several of the FBI officials who worked on Crossfire Hurricane have been fired (Comey, McCabe and Strzok), but not over the abuses during the FISA process.

Only one Crossfire Hurricane team member, Kevin Clinesmith, has faced any repercussions specifically related to their activities on the investigation.

Clinesmith, who was a lawyer in the FBI’s national security branch, pleaded guilty on Aug. 19 to making false statements by altering a June 2017 email from a CIA analyst to say that Carter Page was “not a ‘source'” for the spy agency.

Page had been an operational contact for the CIA through at least 2013.

Republicans have called for more prosecutions of the Crossfire Hurricane team members. The FBI has not released details on the status of its OPR investigations.