McConnell released a statement saying that Republicans will continue to work with the White House in order to bring a vote on a bipartisan piece of coronavirus stimulus legislation before the election. McConnell specifically mentioned the Paycheck Protection Program (PPP) and helping small businesses. McConnell said the bill would authorize $500 billion dollars of funding, according to The Hill.

“Secretary Mnuchin and Chief of Staff Meadows are right: There is no excuse for Democrats to keep blocking job-saving funding for the Paycheck Protection Program while other conversations continue. The PPP is a popular program that has saved tens of millions of American jobs. It is so bipartisan that its first round was replenished and extended several times by unanimous consent in both the Senate and the House. But it has become yet another casualty of Democrats’ all-or-nothing obstruction,” McConnell said.

“Last month, 52 Senate Republicans voted to pass hundreds of billions more dollars for priorities like testing, healthcare, safe schools, unemployment benefits, and economic support. That included legislation from Chairman Rubio and Senator Collins that would provide a second round of the PPP for the hardest-hit small businesses while streamlining the program and strengthening oversight,” McConnell continued. 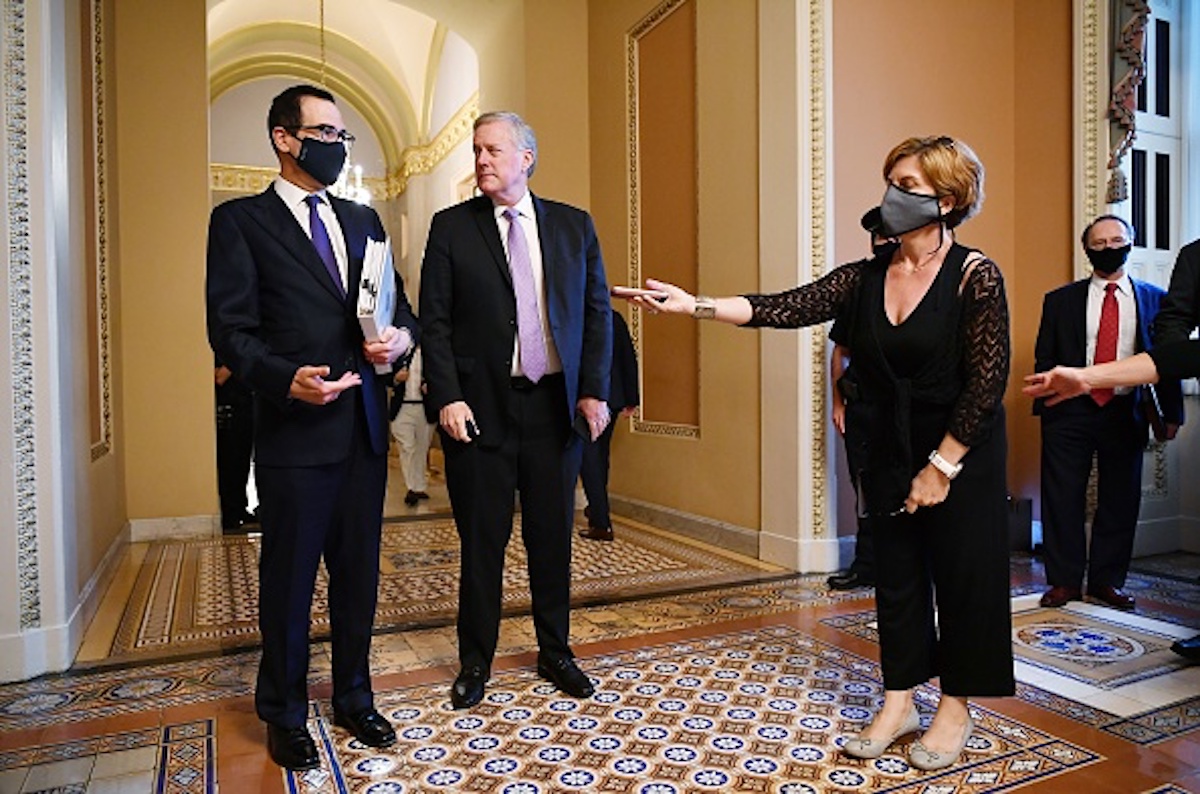 “When the full Senate returns on October 19th, our first order of business will be voting again on targeted relief for American workers, including new funding for the PPP. Unless Democrats block this aid for workers, we will have time to pass it before we proceed as planned to the pending Supreme Court nomination as soon as it is reported by the Judiciary Committee,” he concluded.

President Donald Trump has signaled he will sign a stimulus bill before the election.

Trump reopened talks Wednesday about a stimulus deal, just one day after canceling negotiations with Democrats. Speaker of the House Nancy Pelosi criticized Trump for ceasing negotiations the day before on a coronavirus stimulus package until after the election, saying the White House does not want to defeat the virus.

“Nancy Pelosi is asking for $2.4 Trillion Dollars to bailout poorly run, high crime, Democrat States, money that is in no way related to COVID-19,” Trump tweeted. “She is not negotiating in good faith. I am rejecting their request.”

“The House & Senate should IMMEDIATELY Approve 25 Billion Dollars for Airline Payroll Support, & 135 Billion Dollars for Paycheck Protection Program for Small Business. Both of these will be fully paid for with unused funds from the Cares Act. Have this money. I will sign now!” Trump tweeted Tuesday night.

Trump then added: “If I am sent a Stand Alone Bill for Stimulus Checks ($1,200), they will go out to our great people IMMEDIATELY. I am ready to sign right now. Are you listening Nancy?” (RELATED: ‘Unwilling To Crush The Virus’ — Pelosi Slams Trump For Rejecting COVID-19 Stimulus Deal Before Election)

On Tuesday morning, Trump sent out another tweet regarding a stimulus deal, saying: “STIMULUS! Go big or go home!!!”