Clint Smith is one of my favorite people. His background includes service in the military and also in law enforcement. He is one of the best-known instructors in the defensive-shooting field, and Thunder Ranch remains one of the most popular venues for serious defensive shooters. And, anyone who has taken his classes or seen his videos knows he also could have been a stand-up comedian. His humor underscores the serious, no-nonsense training for which the man is known. Over the years, I have enjoyed his friendship and the numerous classes that I have taken at Thunder Ranch.

While I occasionally do consulting work for Nighthawk Custom, I was not involved in its recent project with Smith. Needless to say, however, I was pleased to have the opportunity to field test the result of that collaboration, the Thunder Ranch Combat Special from Nighthawk Custom.

To begin with, this Thunder Ranch is a full-size 1911 with a 5-inch barrel, made entirely of steel, and weighing in at a solid 41.3 ounces. It is available in 9 mm or .45 ACP, with the .45 received for testing. The finish on the frame and slide is smoked nitride, which gives the pistol a vintage, businesslike look. The slide also sports the Thunder Ranch logo on both sides. 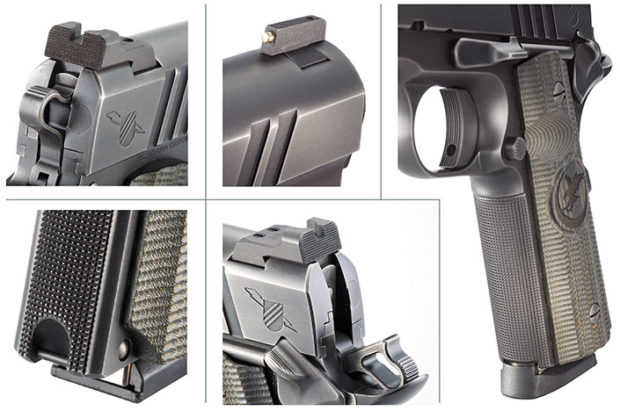 The rear-sight assembly features a wide notch for rapid acquisition ∙ An 18-karat gold bead in the front sight is easy to see and adds a touch of elegance ∙ Checkering along the frontstrap provides subtle purchase, though it may be unnecessary ∙ For instances where added retention is needed, the mainspring housing contains a lanyard bar ∙ The narrow, unobtrusive ledge of the thumb safety provides sufficient room for actuation.
–

The slide also features rather bold cocking serrations at the front and rear. These custom touches are preferred by Smith because they are a distinct aid in giving the shooter a more positive grip while chambering a round or performing a press check.

In keeping with the defensive role of this Thunder Ranch pistol, the barrel is of match-grade quality, and the recoil-spring setup is of conventional design. This traditional configuration, as designed by John M. Browning, is an aid in quickly field stripping the gun and does not affect the practical accuracy of the pistol.

The pistol frame has 25 lpi checkering on the frontstrap and the rear mainspring housing. While I am not exactly crazy about checkering on a fighting pistol, it is a popular addition for many shooters. I expect that Nighthawk will build the gun with or without checkering, whichever way the customer prefers.

The pistol comes “dehorned” with all sharp edges on the frame and slide smoothed off—a feature that I heartily recommend on any defensive hand-gun because it allows for a quick, positive grip during the pistol presentation. Topping off the Thunder Ranch 1911 package is a set of linen Micarta stocks, featuring bold serrations and the Nighthawk Custom logo.

In my testing of the Thunder Ranch 1911, I used three of my favorite .45 ACP rounds. First is a 230-grain FMJ round from DoubleTap Ammunition that features a flat-pointed bullet. This was one of Col. Jeff Cooper’s favorite bullets, and the ammo was manufactured by Hornady for a number of years. I am pleased to see that DoubleTap is once again making it available to shooters. It provided decent accuracy in testing.

Another favorite of mine is the Speer Gold Dot 230-grain JHP load. Speer has done excellent work in developing a bullet that will reliably expand at .45 ACP velocities.

The final load tested was the 185-grain JHP load from Black Hills Ammunition, which likewise performed admirably in testing. All three of these test loads are excellent choices for the defensive shooter. This Nighthawk pistol functioned reliably with all of them.

Following formal testing, I strapped on the Thunder Ranch 1911 and ran it through some defensive drills. Shooting at close range and going for speed, the gold dot on the front post was quick to pick up and was all one needed to see in order to make hits to the vital zone. Working at 15 and 25 yards, I came to appreciate the clean-breaking 4-pound trigger, too.

This Thunder Ranch 1911 is an excellent pistol and one that Clint Smith has every right to be proud of. I think that his students—and defensive shooters in general—will find it quite useful. A John Browning original design built by Nighthawk Custom to Clint Smith’s recommendations? Now, that’s really putting a winning team on your side. 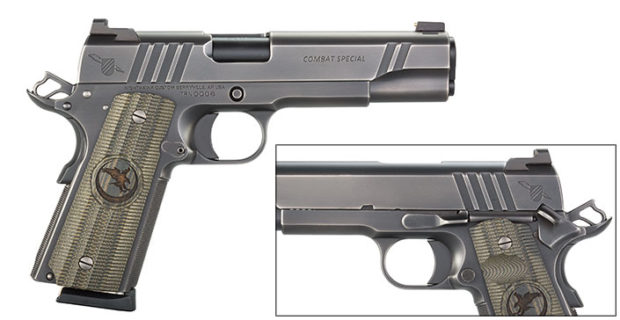