A memorial march in honor of a schoolteacher, Samuel Paty, who was decapitated Friday after showing his class caricatures of the Prophet Muhammad will be held Tuesday near Paris, numerous sources reported.

The march will be held in Conflans-Sainte-Honorine near the school where Samuel Paty taught civics. Local elected officials, teachers, and parent’s associations called on attendees of the march to wear white, the Associated Press reported.

#France’s ???????? lawmakers have gathered for a ceremony and a minute of silence to pay tribute to #SamuelPaty

President Emmanuel #Macron is at the prefecture of #Bobigny to chair a meeting of the unit for the fight against Islamism@abdelmassive is on the ground ⤵️ pic.twitter.com/PB4j6U7xO3

Paty was reportedly targeted after showing students the caricatures of the Prophet Muhammad, published by the Charlie Hebdo satire magazine in 2015, during a lesson on freedom of speech.

The suspect, Abdoullakh Aboutezidovitch, was an 18-year-old Chechen refugee and had no apparent connection with the teacher or the school in Conflans-Sainte-Honorine. He was shot and killed by police Friday.

Anti-terrorism prosecutor Jean-François Ricard said that the suspect went to Paty’s school and asked students to point out the teacher, then followed Paty as he walked home from work, the BBC reported. The attacker used a large kitchen knife to decapitate Paty.

France’s lawmakers will also gather for a ceremony and a minute of silence Tuesday at the National Assembly, according to the AP. A national memorial event will also be held Wednesday to pay tribute to Paty in the courtyard of La Sorbonne university in Paris, symbolic of the free expression of ideas. 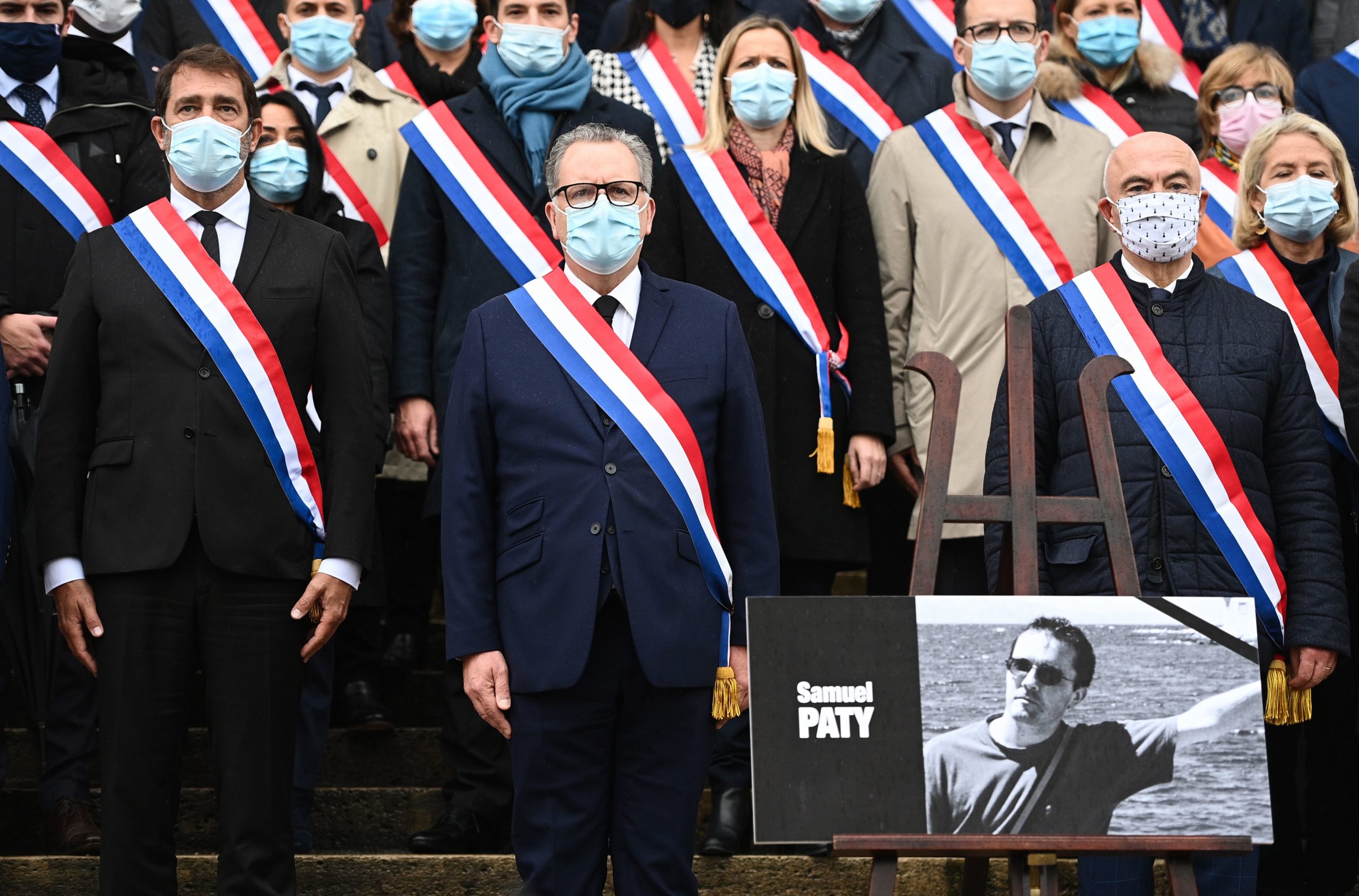 Following the attack, crowds gathered throughout France to pay tribute to Paty, carrying signs that read “I am Samuel” and “I am a teacher,” the BBC reported. The rallies took place in several cities including Paris, where thousands convened in Place de la République on Sunday and observed a moment of silence, with the French national anthem playing at times, Huffington Post France reported. 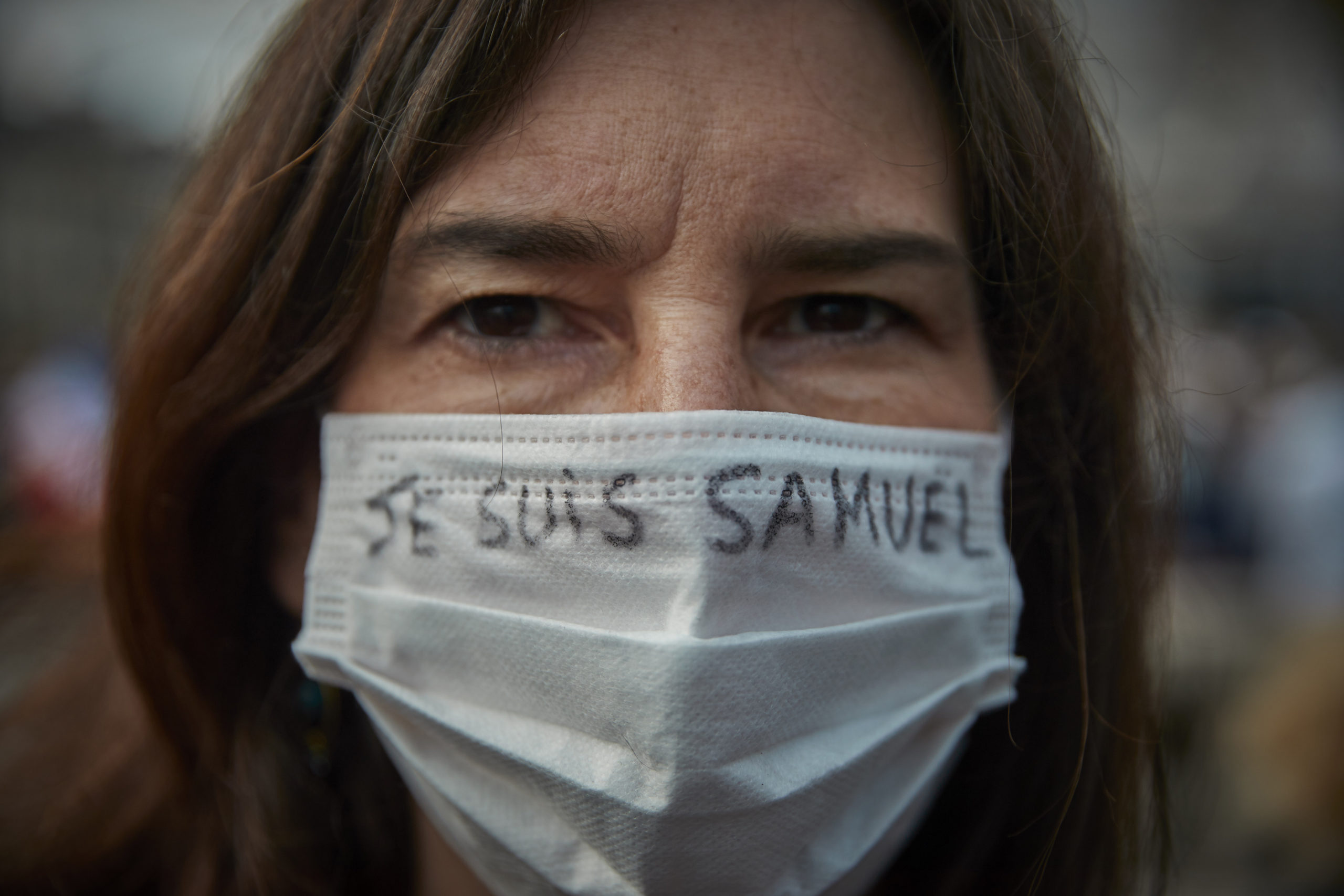 PARIS, FRANCE – OCTOBER 18: A protestor wears a mask with the slogan ‘Je Suis Samuel’ written on it during an anti-terrorism vigil at Place de La Republique for the murdered school teacher Samuel Paty who was killed in a terrorist attack in the suburbs of Paris on October 18, 2020 in Paris, France. (Photo by Kiran Ridley/Getty Images)

An anonymous French judicial official told the AP that 16 people, including family members of the attacker, were in police custody Tuesday.

Anti-terror prosecutors said they were treating the killing as an “assassination in connection with a terrorist organisation,” and have already opened an investigation for murder with a suspected terrorist motive, the AP reported.

French police raided the homes of suspected Islamic radicals and are interviewing nearly 80 people as of Monday. The government is also investigating 51 French Muslim organizations. If the organizations are found to promote hatred, they will be shut down. (RELATED: French Police Raid Homes Of Islamic Radicals, Interview Nearly 80 People Who Posted Messages Supporting Decapitation Of Teacher)

Interior Minister Gerald Darmanin announced that he had ordered the closure of the mosque in Pantin, a suburb northeast of Paris, for six months, saying on television that the mosque’s leader “relayed the message which consisted in saying that this teacher should be intimidated,” according to the AP.