Authorities have identified an 18-year-old Moscow-born Chechen refugee as the suspect in a beheading of a schoolteacher in France that the country’s president has called an “Islamist attack,” numerous sources reported.

Abdoullakh Aboutezidovitch is suspected to have decapitated Samuel Paty, 47, a history and geography teacher at a secondary school in the Conflans-Sainte-Honorine area, according to NBC News. The suspect used a large kitchen knife. France’s anti-terror prosecutor’s office has taken over the investigation of the Friday attack. 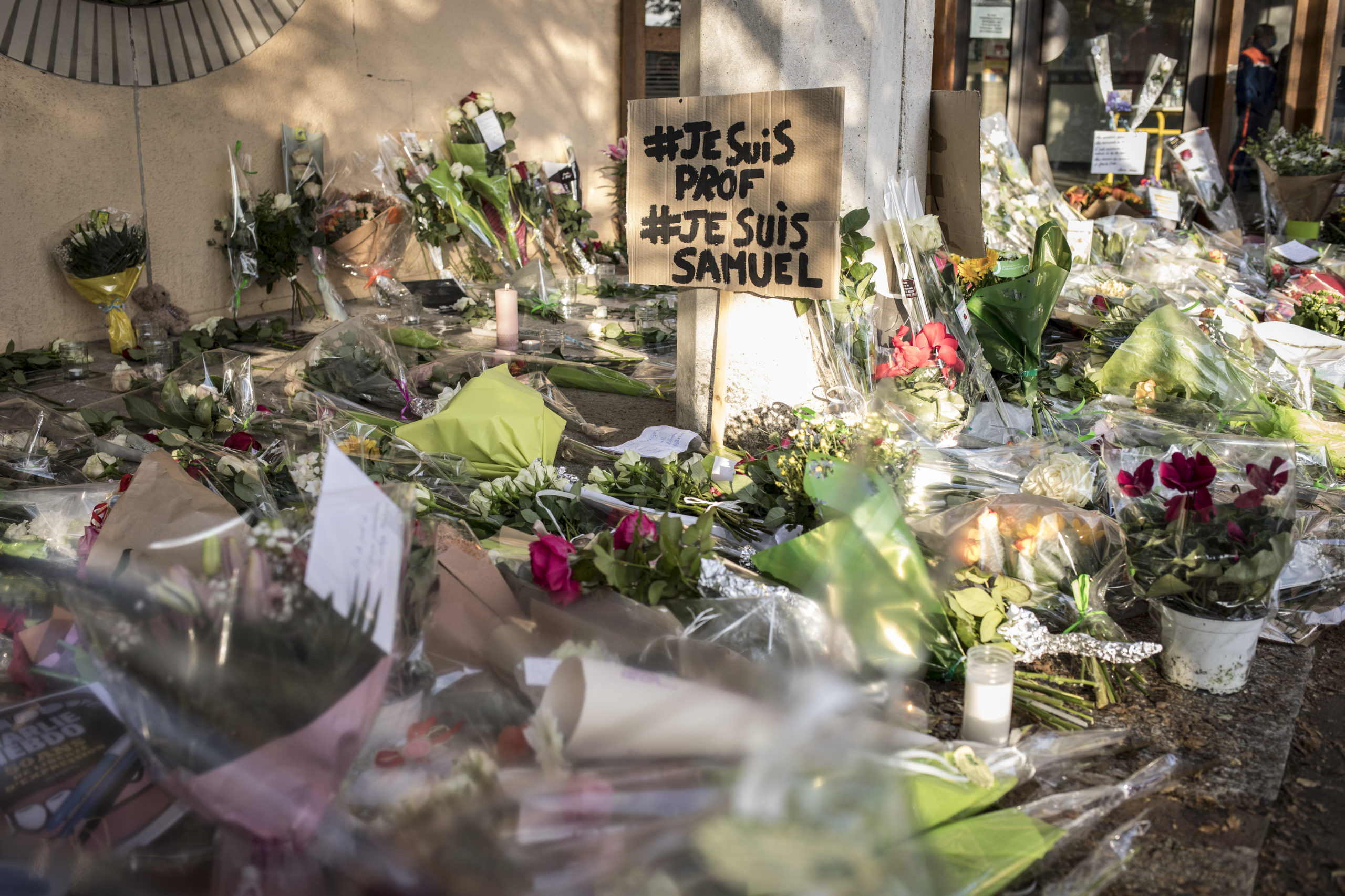 CONFLANS-SAINTE-HONORINE, FRANCE – OCTOBER 17: Locals gather at the College Bois d’Aulne middle-school the day after one of the teachers was found decapitated after showing caricatures of the prophet Mohamed on October 17, 2020 in Conflans-Sainte-Honorine, France. France launched an anti-terrorism investigation after police shot an 18-year old man who attacked and killed a history-geography teacher. (Photo by Siegfried Modola/Getty Images)

French police shot the attacker dead, and nine people, including the suspect’s parents, grandfather and brother, have been taken in for questioning. Four people, including a minor, have been arrested, the Guardian reported. Anti-terror prosecutors said they were treating the killing as an “assassination in connection with a terrorist organisation.”

Paty, who teaches civics, was reportedly targeted after showing students the caricatures of the Prophet Muhammad, published by the Charlie Hebdo satire magazine in 2015, during a lesson on freedom of speech. Some Muslim parents complained to the school about the teacher’s decision to use one or more cartoons as part of a discussion on the Charlie Hebdo attacks, French newspaper Le Monde reported, according to CNN.

“One of our compatriots was assassinated today because he taught. He taught his students about freedom of expression, freedom to believe or not believe. It was a cowardly attack. He was the victim of a terrorist Islamist attack,” French President Emmanuel Macron said during a visit where the murdered teacher worked, the Guardian reported. 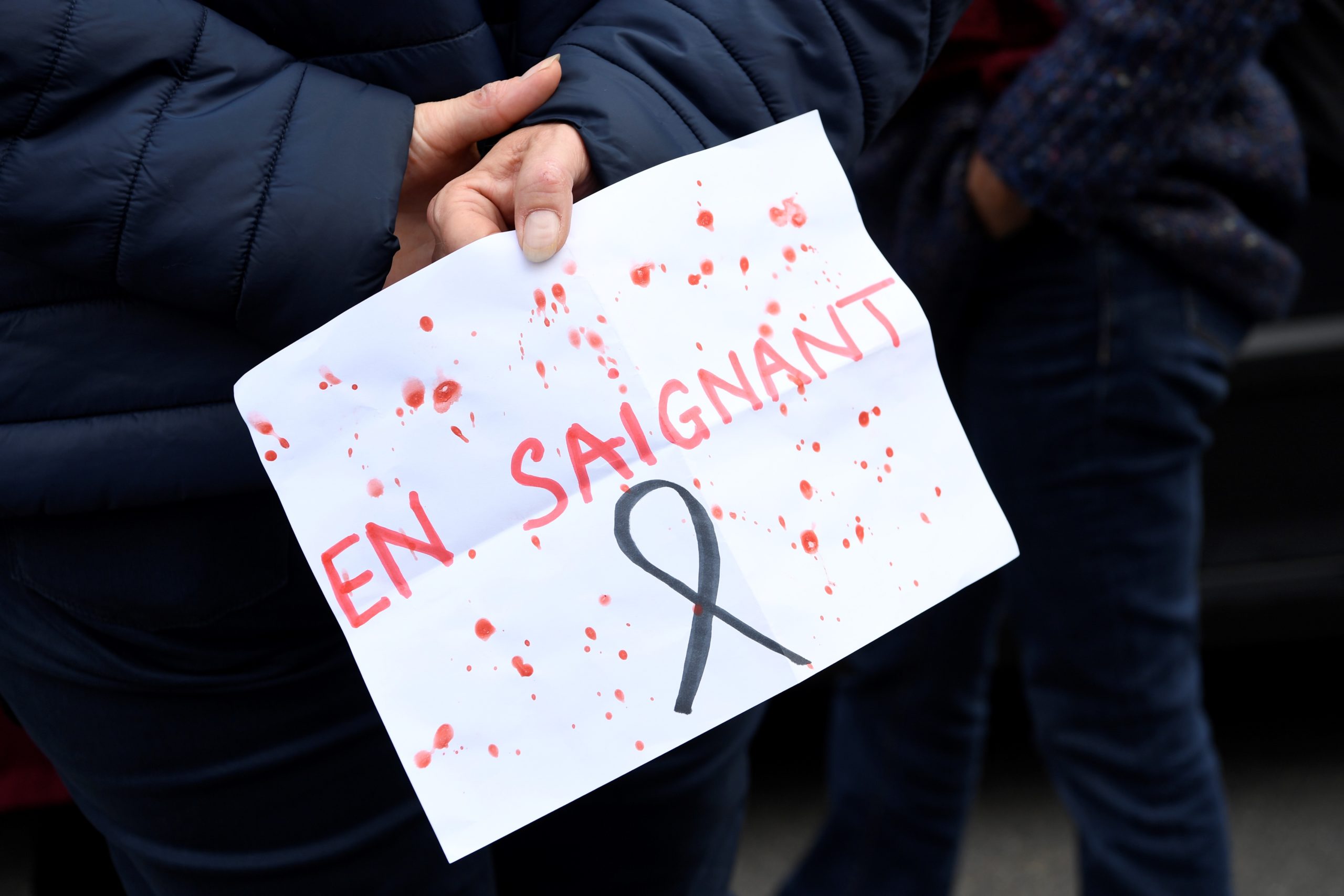 TOPSHOT – A person holds a placard reading ‘Bleeding (a French play on words with the word Teachers and the French word for ‘Bleeding)’ near the entrance of a middle school in Conflans-Sainte-Honorine, 30kms northwest of Paris, on October 17, 2020, after a teacher was decapitated by an attacker who has been shot dead by policemen. (Photo by BERTRAND GUAY/AFP via Getty Images)

A parent of one of the students at the school told Agence France-Presse that the teacher had taken the Muslim children out of the class before showing the cartoons.

“My son told me that it was just to preserve them, it was out of pure kindness, because he had to show a caricature of the prophet of Islam and simply said to the Muslim children: ‘Go out, I don’t want it to hurt your feelings,’ that’s what my son told me,” Nordine Chaouadi told the newspaper, according to Fr24 News.

In early October, Macron announced a law that would combat “radical Islamism” in the country by cracking down on foreign financing of mosques and private religious schools.

Macron aims to rid France of what authorities have called a “parallel society” of radical Muslims who live in an underworld that thrives in some neighborhoods around France, where a radical vision of Islam can take control of the local population to inculcate their beliefs. (RELATED: French President Emmanuel Macron Outlines Measures To Combat ‘Radical Islamism’ And ‘Separatism’)

Macron cited Islamic terrorism in the country during his announcement, which comes nearly a month after the trial of the 14 people accused of helping to carry out the Charlie Hebdo terrorist attack in 2015 began.

The president noted the 2015 attacks, which also included an attack on a kosher supermarket by French-born Islamic extremists, and an incident in September, when a man from Pakistan stabbed two people near the magazine’s former offices over its publication of caricatures of Muhammad.