Most Americans think that the QAnon conspiracy theory is ‘very bad’ for the country, according to new data from Pew Research Center.

Pew conducted the survey of 9,220 U.S. adults between Aug. 31 and Sept. 7, 2020, and found that 74% of Americans believe the conspiracy theory to be either ‘somewhat bad’ or ‘very bad’ for the country. (RELATED: YouTube Announces Crackdown On QAnon Content) 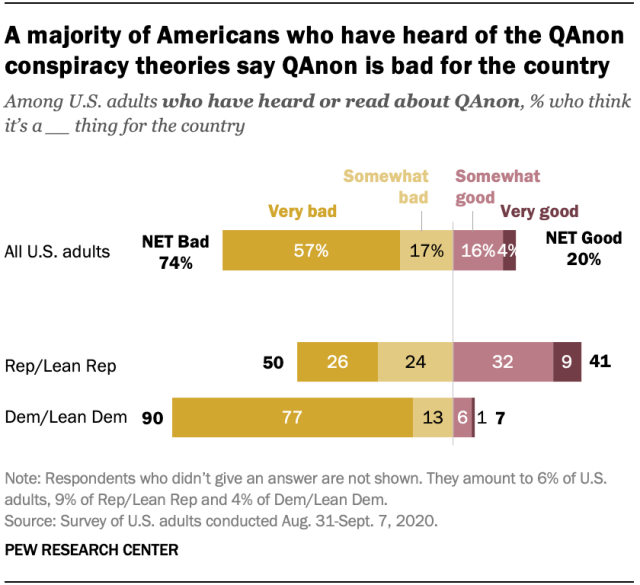 Pew found that awareness of the QAnon conspiracy theory increased dramatically between the months of February and August of 2020. Those with greater political knowledge were also more likely to have heard of the conspiracy than others, according to Pew.

The QAnon conspiracy theory alleges that a group of Satanist pedophiles, represented mainly by prominent Democrats and entertainment figures, are attempting to undermine President Donald Trump through the alleged “deep state,” according to the Wall Street Journal.

QAnon groups have gained popularity since the beginning of the coronavirus pandemic on platforms such as Facebook and Instagram. The average membership in 10 prominent Facebook groups for QAnon increased almost 600% from March to July, according to the Wall Street Journal.