With the pandemic upending traditional holiday celebrations like parties, gatherings and caroling, some Americans are keeping their spirits up by starting one tradition rather early: decorating for Christmas.

“It’s been a hard year,” Maryland resident Julie Zimmer told The Washington Post. “We’ll all have to do things to keep our spirits up, together.”

Zimmer told the Post she decided to start hanging Christmas lights a week before Halloween, saying “they bring happiness,” according to the report.

Fred Stewart of Missouri told The Wall Street Journal (WSJ) he was so upset that he couldn’t throw his usual holiday party that he decided to decorate his front yard for the first time, buying four 6-foot snowmen and an 8-foot Santa. He also bought 20 pink flamingos in Santa caps, according to the WSJ.

“We were like, what else can we do?” Stewart told the outlet.

Decorating isn’t just for the outdoors, though. Sarah Garrett put her Christmas tree up Nov. 12 and bought more than $150 worth of new decorations at Target, according to the WSJ.

“The entire year has been one thing after another,” the California resident told the WSJ. “We were like, ‘Let’s just go big. Don’t hold anything back.'” 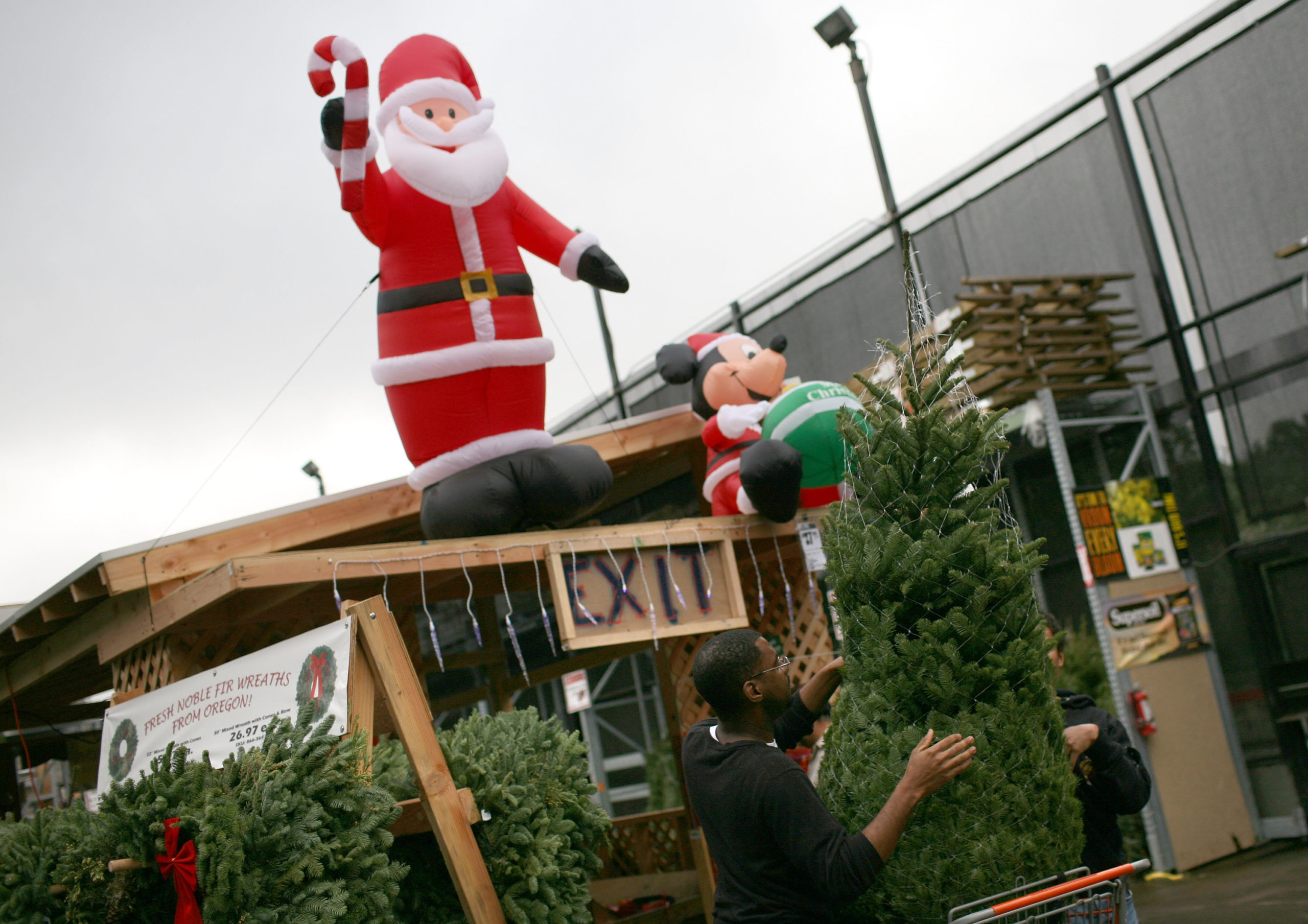 COLMA, CA – DEC. 02: A Home Depot customer places a Christmas tree in a cart at a Home Depot store Dec. 2, 2008 in Colma, California. Home Depot sells more Christmas trees than any other retailer in the world and expects to sell over 2 million trees this year. (Photo by Justin Sullivan/Getty Images)

Meanwhile in New Smyrna Beach, Florida, Krista Barringer and her children have been prepping for Christmas since Nov. 1, the WSJ reported.

“I said to my friends, ‘I probably look crazy.'”

Barringer said she’s spent more than $1,000 on lights and decorations, a huge increase from the $600 she reportedly spent last year, the WSJ reports.

“So we can’t control a pandemic, but we can control the physical environment,” she said, according to the report. “So putting up lights, putting up the Christmas tree, gifts that make you happy or excited, (it) gives you something to look forward to.”

And the joy of the Holiday season doesn’t end with decorators. Businesses that sell holiday decorations are seeing a spike in demand, according to The Washington Post.

Virginia Christmas Lighting and Decor Co., which hangs lights at people’s homes, co-owner Michael Sfreddo said he began installing lights by September after the first order was placed in August, according to the report. (RELATED: Florida Officers Hand Out Hundreds Of Turkey Thanksgiving Meals Ahead Of Holiday)

“My body right now feels like it usually feels on Christmas Eve when I had just been working nonstop for two months,” Sfreddo told The Washington Post. “I’m already to the point where I want to collapse, and it’s only been November.”

Paula Thalis manages Christmas decoration stores A Christmas To Remember in Annapolis and Tysons Corner and said that sales are unusually high despite the pandemic’s toll, according to the report.

“Sales are higher than they normally are at this time of the year,” she told The Washington Post. “Usually, we don’t get real busy until after Thanksgiving.”

Thallis said that pandemic-themed ornaments are the top sellers, along with decorations of masks, toilet paper and hand sanitizer, The Post reports.

Christmas Decor of New Jersey is also already prepping for the season, working six days a week to set up lights at homes and businesses, according to NBC 4 New York.