The Chicago Teachers Union blamed the push to reopen schools on “sexism, racism, and misogyny” in a tweet that was later deleted Sunday.

The union, which represents roughly 20,000 teachers and clinicians, said “the push to reopen schools is rooted in sexism, racism and misogyny,” and later walked back the statement after receiving criticism. 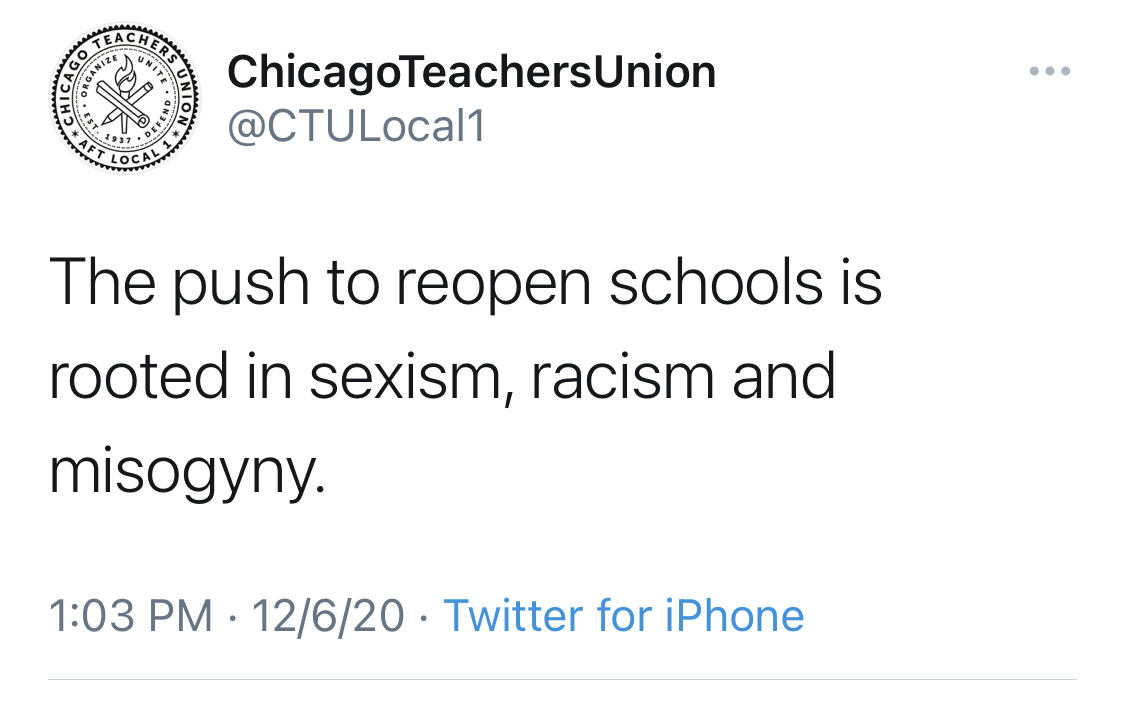 “Fair Enough. Complex issue. Requires nuance. And much more discussion. More important, the people the decision affects deserve more. So we’ll continue give them that. Appreciate the feedback of those truly in the struggle,” the follow-up tweet said.

Fair enough. Complex issue. Requires nuance. And much more discussion. More important, the people the decision affects deserve more. So we’ll continue give them that.

Appreciate the feedback of those truly in the struggle.

Many teachers unions across the country have resisted efforts to reopen schools if certain demands aren’t first met.

Despite data collected globally indicating that infections did not surge when schools reopened, even when community transmission was high, schools in major cities including Chicago, Philadelphia, Boston and San Diego put off their plans to reopen in mid-November with no set date for reopening. (RELATED: Dr. Fauci Said To Reopen Schools, And Close Bars — But Major School Districts Continue To Stay Closed)

The Chicago Teachers Union criticized the city’s plan to reopen schools on Dec. 3. The plan would allow prekindergarten students and special education programs to return Jan. 11. Students in kindergarten through eighth grade would return to school a month later in a hybrid model.

In Washington, D.C., the city’s teachers union rejected an agreement with the public school system to reopen campuses in November. The Washington Teachers’ Union has lobbied for a provision to a tentative agreement that would allow teachers to opt out of in-person teaching, according to DCist, but the school system did not support it.