A man who caused more than $150,000 in damages to a Christopher Columbus statue in St. Paul, Minnesota, is avoiding jail time due to a restorative justice program that will instead require he complete community service, CBS Minnesota reported Monday.

Michael Anthony Forcia was charged with criminal damage to property in the first degree after organizing an event to knock down the statue at the Minnesota State Capitol on June 10 amid riots and protests in Minneapolis following the death of George Floyd roughly two weeks prior, according to CBS Minnesota. 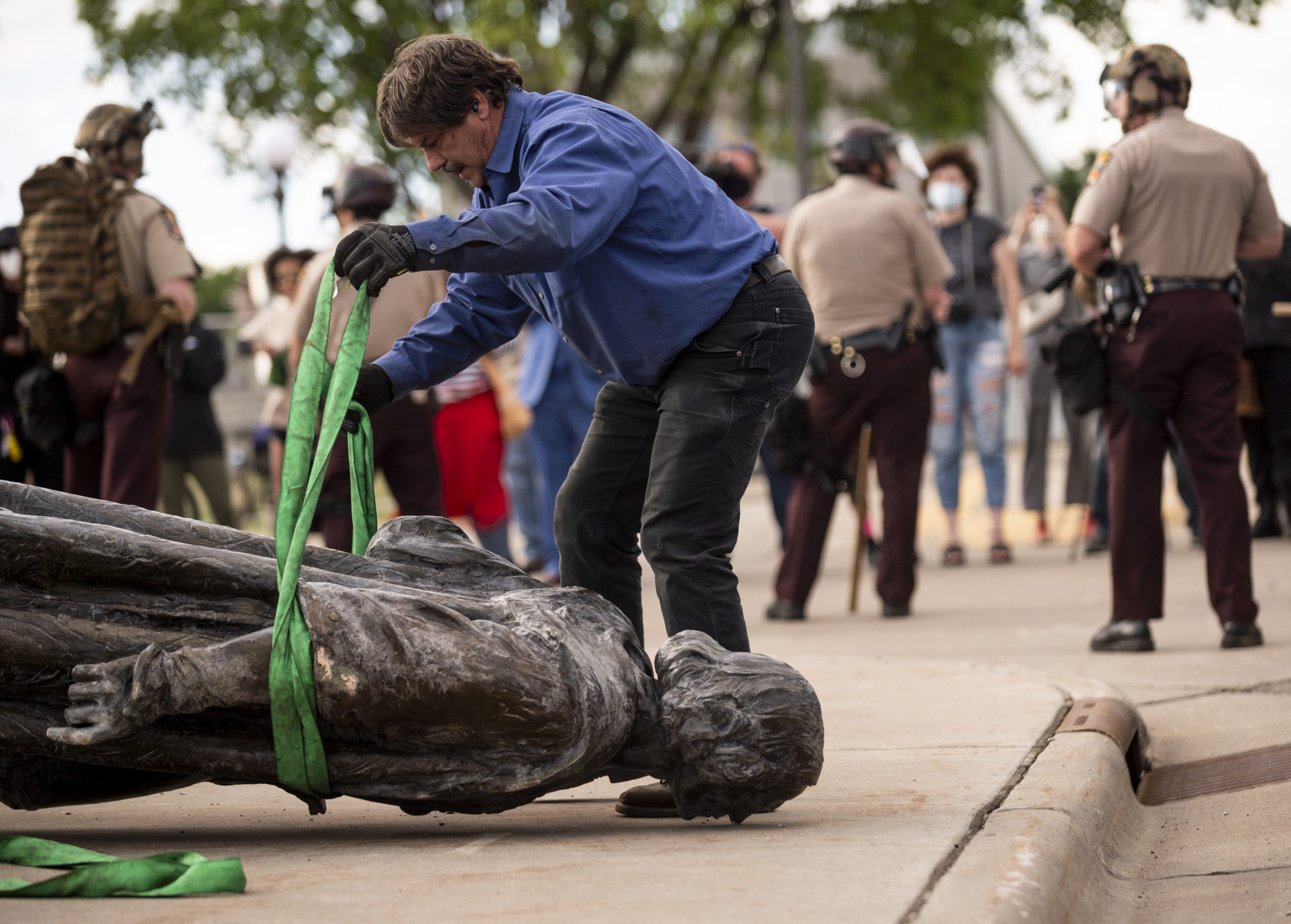 ST PAUL, MN – JUNE 10: A statue of Christopher Columbus, which was toppled to the ground by protesters, is loaded onto a truck on the grounds of the State Capitol on June 10, 2020 in St Paul, Minnesota. (Photo by Stephen Maturen/Getty Images)

Although the punishment for a conviction of someone with no criminal history is a probationary sentence with supervision of up to five years, Forcia will instead serve 100 hours of community service after Ramsey County Attorney John Choi initiated a restorative justice process. (RELATED: ‘The Time For Being Complacent Is Over’: American Indian Activists Tear Down Columbus Statue At Minnesota State Capitol)

The process involved two circles where Forcia’s actions were discussed. Dr. Ran Sethuarju, a criminal justice professor, facilitated one of the circles alongside Beverley Busyhead, a Native American community member. Within the circles, the U.S.’s history of violence toward Native Americans and the civil unrest following Floyd’s death were discussed, with the ultimate conclusion being that jail time would not restore healing in the community.

Forcia also acknowledged the harm he inflicted on those who support the statue, such as Italian Americans who consider Columbus a part of Italian heritage in the country, KARE 11 reported.

He also wrote a statement in a file submitted to the court that recognized the importance of the rule of law.

“The rule of law is an essential element to a peaceful society.  I broke the law and was prepared to accept the consequences when I did that,” the statement said. “By my actions and service going forward, with the help of those from the circle who have offered their support, I will work to restore community peace and seek to repair the harm that I have caused.”

The groups claimed that jail time would serve no purpose, but suggested acknowledging the toppling of the statue as an act of civil disobedience. 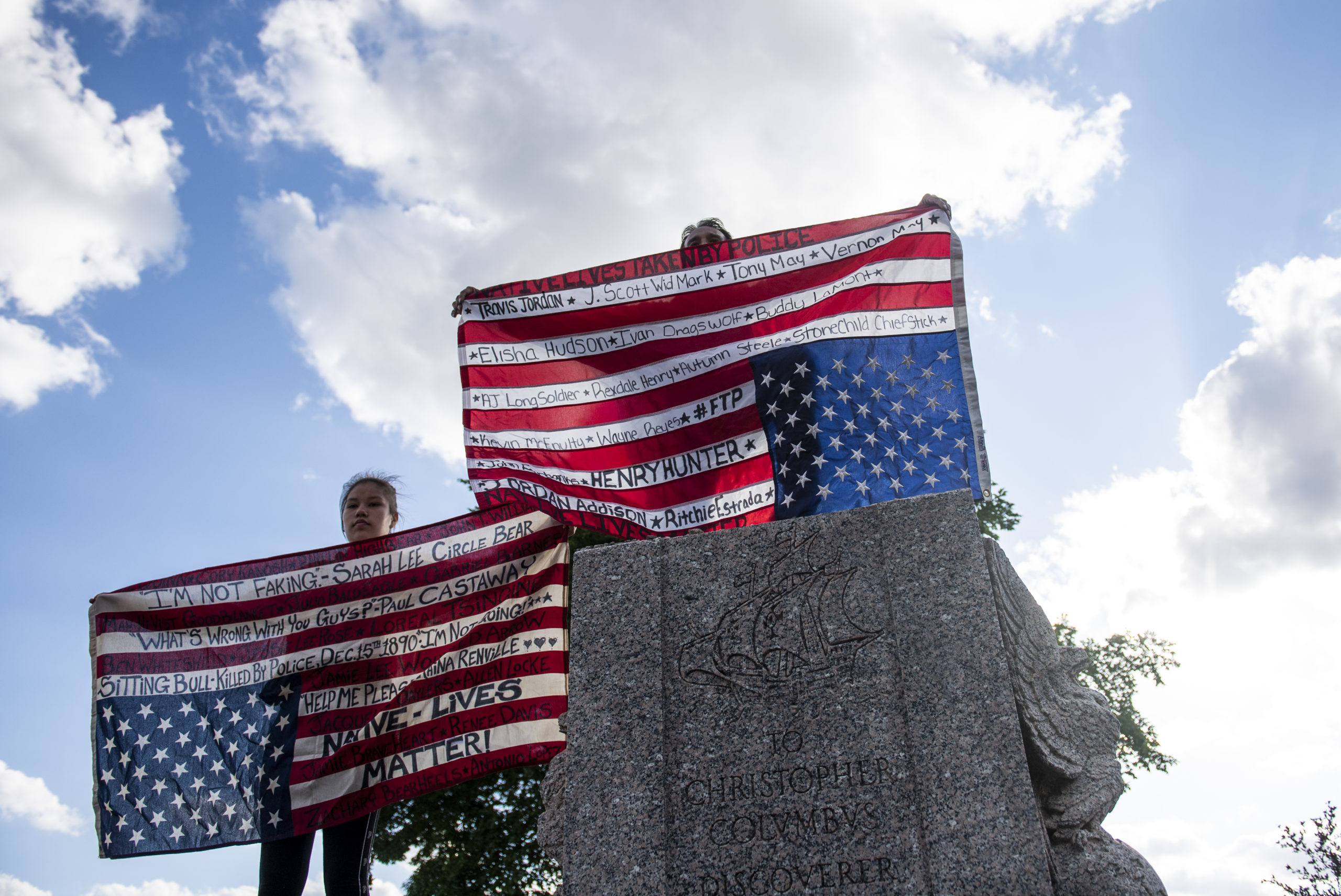 ST PAUL, MN – JUNE 10: Two people hold up flags, noting the names of Native American people who have been killed, on the spot where a statue of Christopher Columbus, which was toppled by protesters, stood on the grounds of the State Capitol on June 10, 2020 in St Paul, Minnesota. (Photo by Stephen Maturen/Getty Images)

Choi says that the goal of justice should be to unite a community rather than divide it.

“Employing restorative principles in a way that allows all voices and perspectives to be respectfully heard provides a greater opportunity to achieve true justice for our community, to respond more meaningfully and in due time, rather than waiting more than a year for an adversarial trial that would not provide adequate closure for our community and likely create additional division,” he said, according to CBS Minnesota.

For his 100 hours of community service, Forcia will provide education and participate in other restorative practices aimed at healing harms that were discussed in the circles. Damages to the statue are estimated to cost $154,553.