The coronavirus pandemic and months of widespread social unrest and rioting following the May 25 death of George Floyd have led in tandem to a hollowing out of American cities. Service industries within cities have had to close up shop as the pandemic has forced companies to work remotely and rioting has motivated urban dwellers to move outside of cities.

Many companies operating out of major cities have switched to working remotely. Google has told their employees they can choose to work from home as late as July 2021, according to CNN. Facebook employees have the option to work from home until July 2021 as well, Forbes reported. This flight out of cities has left building owners struggling to fill their office space.

Kastle Systems, a security company that tracks access cards for thousands of office buildings, said that as of November only about a quarter of workers had returned to offices, according to The Wall Street Journal (WSJ). (RELATED: 4-6 Week Nationwide Lockdown Could Curb The Pandemic And Jumpstart The Economy, Biden Covid Advisor Says) 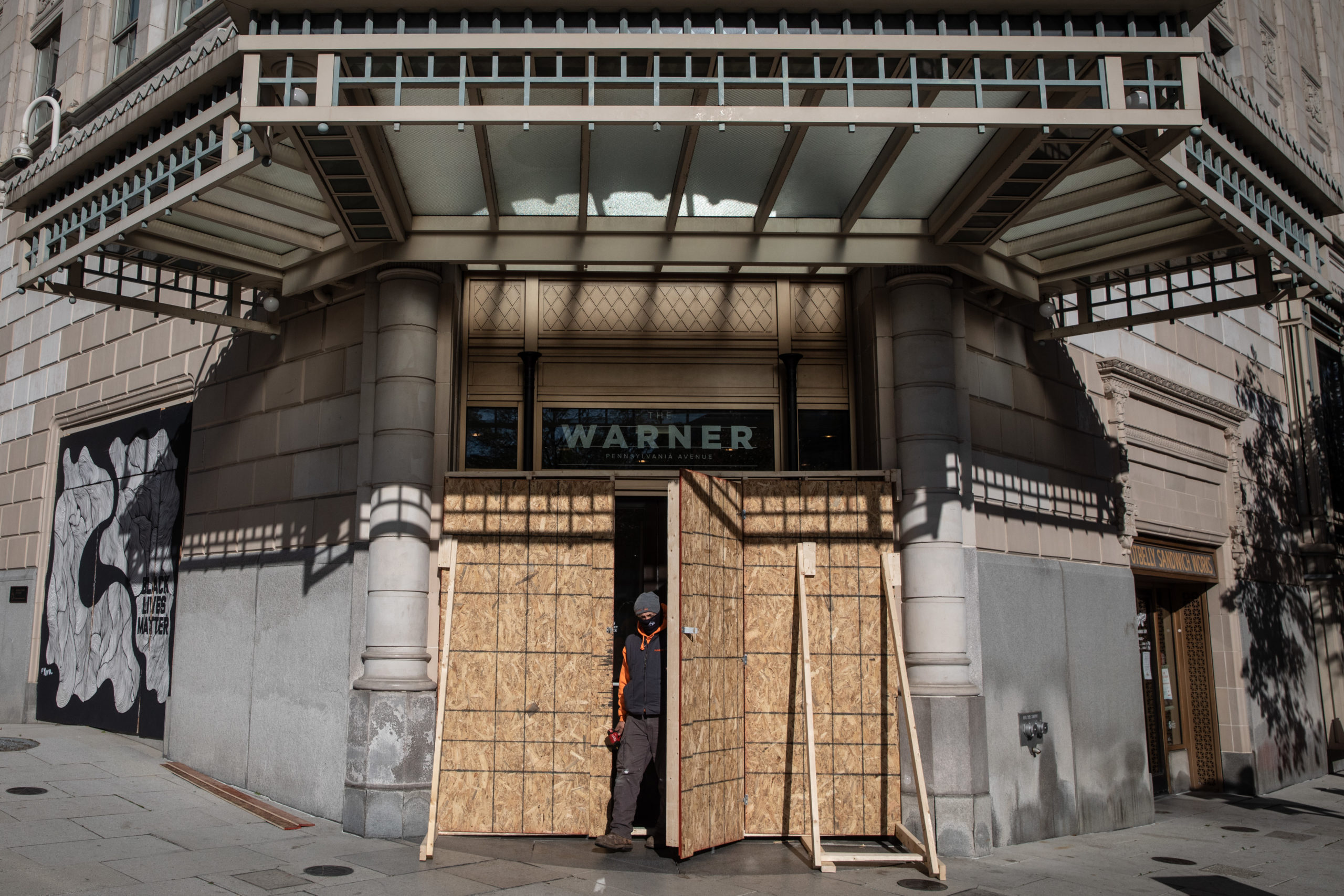 WASHINGTON, DC – NOV. 02: A workman boards up the windows of a store in anticipation of unrest related to the presidential election on Nov. 2, 2020 in Washington DC. Preparations continue throughout Washington D.C ahead of the Nov. 3 U.S presidential election with many business owners boarding up and securing their shops in anticipation of protests and rioting. (Photo by Chris McGrath/Getty Images)

City’s economies have taken hits with the loss of these workers. San Francisco apartment rent prices have fallen by a sharp 20%, according to CoStar Group Inc data reported by WSJ. The Washington D.C. metro system is reporting an almost $500 million funding gap and might have to cut services and close 19 stations, according to WUSA9. They are also reporting that COVID-19, among other factors, has increased their operating costs by almost $100 million. Searches for new office space in San Francisco have decreased by 13% according to the VTS Office Demand Index, reported WSJ.

Restaurants have suffered, as well. Paul McLaughlin, managing partner of Oceana in Midtown Manhattan, told the WSJ that his business has fallen 85% to 90% from his usual rate. The National Restaurant Association said in June that the food and restaurant industry had lost almost $120 billion, according to ABC News.

New research from the @WeRRestaurants indicates that the restaurant industry has lost $120 billion in sales during the last three months due to the impact of coronavirus in the United States. https://t.co/AzYL0XDWRo pic.twitter.com/pcXIWIGmnB

The rioting that swept the country in the wake of George Floyd’s death while in Minneapolis police custody may have also played a role in the hollowing out of American cities, although that seems to have motivated individual renters and homeowners to move, rather than businesses. (RELATED: ‘You’re Going To Kill Me Man’: Body Cam Transcripts Show George Floyd Told Officers He Couldn’t Breathe 20 Times) 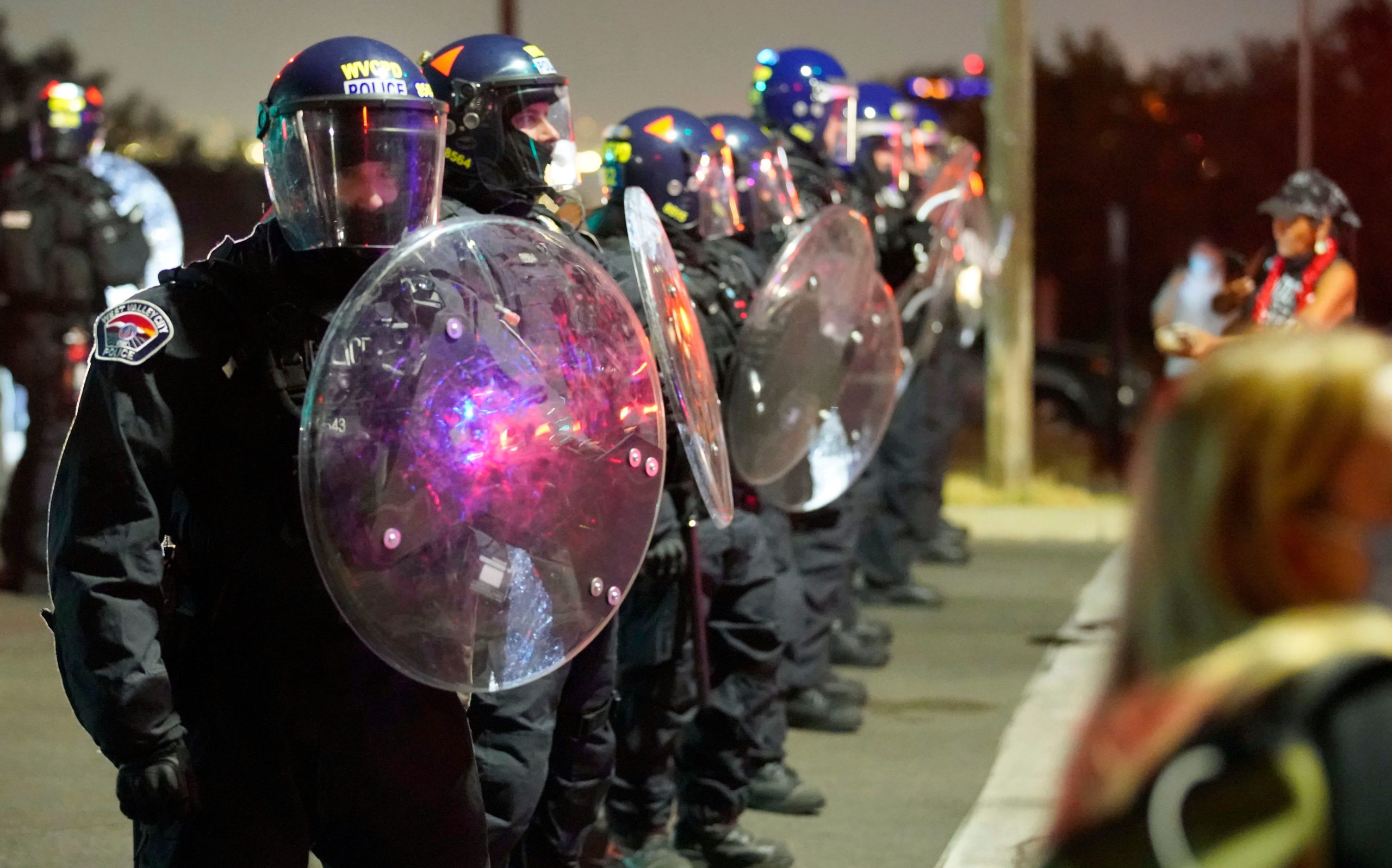 Law enforcement officers in riot gear block a street outside the venue where the vice presidential debate was taking place in Salt Lake City, Utah on Oct. 7, 2020. (Photo by GEORGE FREY/AFP via Getty Images)

In Chicago, residents cited riots and rising violent crime as their reason to move out of the city and into the surrounding suburbs, according to the Chicago Tribune.

“If [rioting] happens a third time, people who are just hanging onto a belief that downtown is still a place to live and shop are going to give up,” a Chicago alderman told CBS Chicago. “We’re going to lose people. They’re going to move. We’re already seeing that start to happen.”

Real estate broker Rafael Murillo told the Tribune that people want to feel “safe,” that “they want to be able to come outside their homes and enjoy their neighborhood amenities, whether it’s running at the park, enjoying a nice little dinner, shopping. But with everything going on, there are a lot of residents who are not feeling safe right now.”

Chaos in Chicago last night as mass looting broke out after police officers returned fire on a suspect that reportedly shot at them
pic.twitter.com/T5YWLPfNtj

In New York City, real estate brokers say there is an increasing demand for homes outside of New York City, generally north of the city or in Long Island, according to The Guardian. The shift appears to be driven both by the pandemic and by concern about riots and unrest.

“First off, it’s the virus, and people are just feeling done with small apartments. Then came the protests,” New York real estate agent Madeline Wiebicke told The Guardian, adding that she thought people were looking for a “quiet yard and most of all a home office.”