The strong earthquake hit 46 kilometers southeast of Zagreb, the European Mediterranean Seismological Center said according to the Associated Press. A 12-year-old girl died in the town of Petrinja, which was widely damaged by the earthquake. Sisak, a nearby town, was also badly hit.

One other person died in a village close to Petrinja, officials said, according to the report. 20 people were hospitalized, including 2 people with serious injuries. 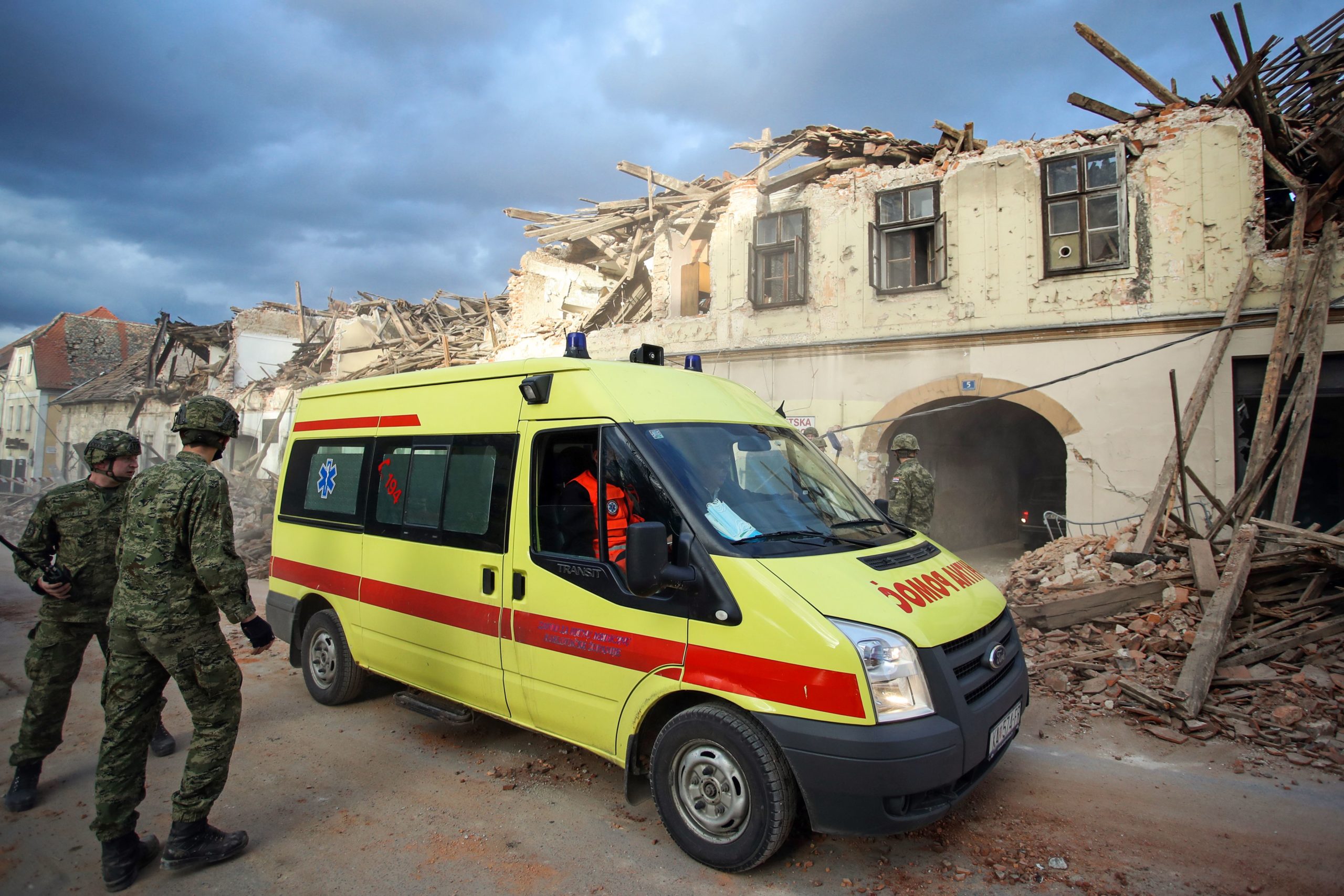 Crotian soldiers walk next to a first aid vehicle and damaged buildings in Petrinja, some 50kms from Zagreb, after the town was hit by an earthquake of the magnitude of 6,4 on December 29, 2020. – The tremor, one of the strongest to rock Croatia in recent years, collapsed rooftops in Petrinja, home to some 20,000 people, and left the streets strewn with bricks and other debris. Rescue workers and the army were deployed to search for trapped residents, as a girl was reported dead. (Photo by Damir Sencar/AFP via Getty Images)

A 5.2 magnitude earthquake also hit the area Monday, according to Reuters.

Croatia’s state HRT television reported that people were trapped inside collapsed buildings in the aftermath of the disaster. “The center of Petrinja as it used to be no longer exists,” the television station said.

“My town has been completely destroyed,” Petrinja Mayor Darinko Dumbovic said in a statement, according to the Associated Press. “We have dead children. This is like Hiroshima – half of the city no longer exists.”

Croatian Prime Minister Andrej Plenkovic, who arrived at Petrinja with other government ministers after the earthquake, said that most of the buildings in the center of the town were destroyed.

“The biggest part of central Petrinja is in a red zone, which means that most of the buildings are not usable,” he said.

Plenkovic said that there are 500 places in army barracks where people can stay, and others will be housed in hotels and other locations. (RELATED: Swarm Of Earthquakes Leaves Scientists On Edge For Something Much Bigger)

“No one must stay out in the cold tonight,” he said according to the report.

In Sisak, patients at a damaged hospital will be evacuated in army helicopters and ambulances, Plenkovic said.

European Commission president Ursula von der Leyen said on Twitter Tuesday that she had spoken to Plenkovic and has instructed the European Commissioner for Crisis Management, Janez Lenarcic, to travel to Croatia as soon as possible.

After another powerful earthquake in Croatia, the 2nd in the past 2 days, I spoke with Prime Minister @AndrejPlenkovic again.

We are ready to support. I have asked @JanezLenarcic to stand ready to travel to Croatia as soon as the situation allows.

We stand with Croatia.

While Croatia is prone to earthquakes, the last powerful earthquake was in 1990, which destroyed the Adriatic coast village of Ston.

The Croatian military was deployed to assist with rescue operations in Petrinja, the Associated Press reported. Footage from the regional TV channel N1 showed firefighters trying to remove debris after a building collapsed on a car with a man and a small boy inside. Both were rescued and taken to an ambulance. Rescue dogs were used by emergency teams trying to locate survivors in the debris that littered the streets.

Serbia, Bosnia, and Slovenia all felt the earthquake, according to the Associated Press. The Austria Press Agency reported that the quake was felt in Graz, which is located in southern Austria.