President-elect Joe Biden’s appointment to the Civil Rights Division of the Justice Department argued in a 1994 letter to Harvard’s student newspaper that black people have “greater mental, physical and spiritual abilities” than white people, and also was accused of inviting a professor to campus that Jewish groups denounced as anti-Semitic.

Kristen Clarke, who was president of the Black Students Association at Harvard when she wrote the letter to the editors of the Harvard Crimson, explained how blacks have superior abilities following the release of “The Bell Curve: Intelligence and Class Structure in American Life,” a book that linked intelligence to class and race.

The letter was in response to those who defended the book, written by Harvard psychologist Richard Herrnstein and American Enterprise Institute (AEI) scholar Dr. Charles Murray. The authors argue in the book that IQ is largely a genetic phenomenon and that low IQs can be linked to societal issues like crime and poverty.

A few days prior to Clarke’s letter, a student wrote an article defending debate on the substance of the book, rather than dismissing it outright due to its “rather unsettling contentions.” 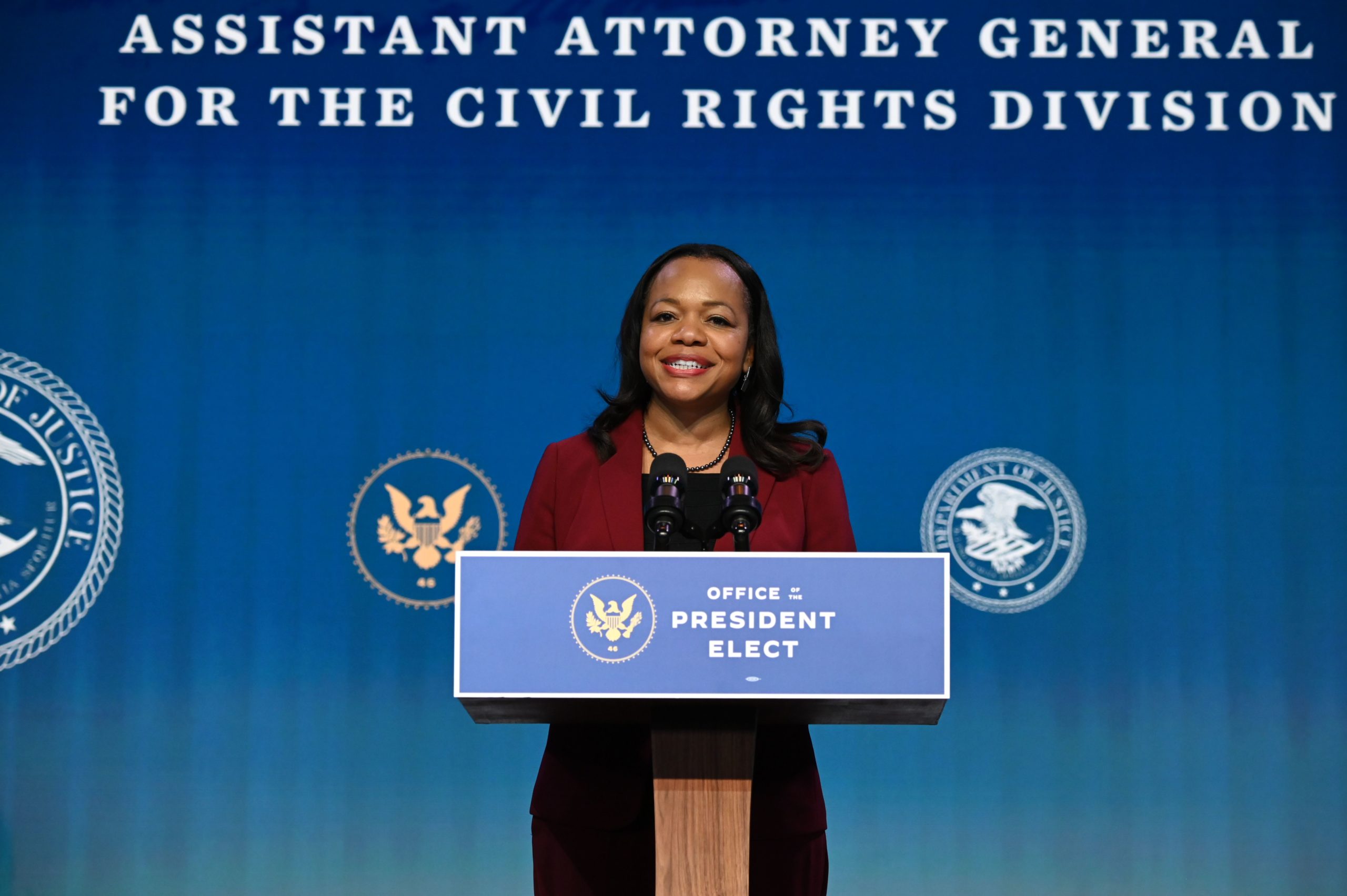 Kristen Clarke, nominee for Assistant Attorney General for the Civil Rights Division, speaks after being nominated by US President-elect Joe Biden at The Queen theater January 7, 2021 in Wilmington, Delaware. (Photo by JIM WATSON/AFP via Getty Images)

Clarke’s letter advised the book’s defenders to refer to several theories that link melanin to mental and physical superiority in blacks to assist in the “search for truth regarding the genetic differences between Blacks and whites.”

She cited Dr. Richard King, a psychiatrist who authored the book “Melanin: A Key To Freedom” and who she said revealed that the locus coeruleus structure in the human brain “is Black because it contains large amounts of (neuro) melanin which is essential for its operation.” She later also mentioned Dr. Carol Barnes, who also wrote a book on melanin, linking melanin to the “superior physical and mental abilities” of black people.

“Some scientists have revealed that most whites are unable to produce melanin because their pineal glands are often calcification or non-functioning,” she wrote. “Pineal calcification rates with Africans are five to 15 percent, Asians 15 to 25 percent and Europeans 60 to 80 percent.”

She added that “Black infants sit, stand, crawl, and walk sooner than whites” and that “melanin endows Blacks with greater mental, physical and spiritual abilities — something which cannot be measured based on Eurocentric standards.”

Clarke said that “The Bell Curve” only further burdened black children who she said are at a disadvantage regardless of their social and economic backgrounds and face abuse that white children “never have to face,” even if they come from similar backgrounds.

She accused “conservative whites” of exacerbating the impact of racism on black children, while “liberal whites” underestimate it. She added that it appeared that “whites have grown tired of hearing about racism” so they accepted the notions described in “The Bell Curve.”

“Attacks on Black people such as those in The Bell Curve are not unique. Black children face this abuse daily through television shows, jokes aired on the radio, textbooks with truncated history, etc. Liberal whites underestimate the damage which racism causes on the minds of Black children, and conservative whites know all too well how to enlarge that damage.” (RELATED: REPORT: Public School Hosts Training That Touts ‘Free, Antiracist Therapy’ For White Teachers)

“No matter how rich or supportive a Black person’s home might be, by the time she is ready to take the SAT or apply to college, she has struggled far more extensively than any white person of the same social and economic background.”

Roughly two weeks after Clarke’s article linking melanin to racial superiority was published, a Harvard student mentioned that Clarke had equivocated on “the melanin theory” in a subsequent letter.

“[The Melanin Theory] is not necessarily something we believe, but some information we think those pursuing a true understanding of The Bell Curve should either address, ignore or refute,” Clarke said, according to a Harvard Crimson columnist.

Months after Clarke’s letter was published, Jewish students at Harvard rebuked Clarke for inviting Wellesley College professor Tony Martin, the author of a book entitled “The Jewish Onslaught,” to speak on campus.

Martin Lebwohl, a Harvard student, wrote that Martin used the opportunity to “denounce the Jewish tradition and the Jewish people for holding a ‘monopoly’ on centuries-worth of the notion of divinely ordained African inferiority,” referring to “The Bell Curve.” Martin also reportedly asked students to consider the book as “only the latest manifestation of a racist tradition spawned by Jews.” Lebwohl said that Clarke had praised Martin as an intellectual “who bases his information of indisputable fact.”

After nearly 25 years, “The Bell Curve” continued to spark protest at Harvard’s campus. In 2017, students protested Murray’s lecture on campus, accusing him of white supremacy while other students held an event where they implied Murray’s book was premised on eugenics.

Clarke currently serves as president and executive director of the National Lawyers’ Committee for Civil Rights Under Law.