The case involves Chike Uzuegbunam, a former Georgia Gwinnett College student who sought to share Christian pamphlets on campus in a peaceful manner, according to the Alliance Defending Freedom (ADF). ADF originally filed the lawsuit in 2016 after Uzuegbunam was prevented from sharing his Christian faith twice by officials at Georgia Gwinnett, a public college.

“School officials violated [Uzuegbunam’s] constitutional rights when they stopped him twice from speaking in an open area of campus,” Tyson Langhofer, the director of ADF’s Center for Academic Freedom told The Daily Caller News Foundation. “The only permit students need to speak on campus is the First Amendment.” (RELATED: FSU Senate President Criticized Black Lives Matter In A Private Chat. Here’s What Happened Next)

In 2016, Uzuegbunam was told that if he wanted to continue sharing his faith on campus, he would need to get permission to use one of two “speech zones,” which made up less than 1% of the entire campus, according to ADF. Uzuegbunam complied, but minutes after speaking about Christianity in the reserved zone, campus police officers told him had to stop and said he would face discipline if he refused. 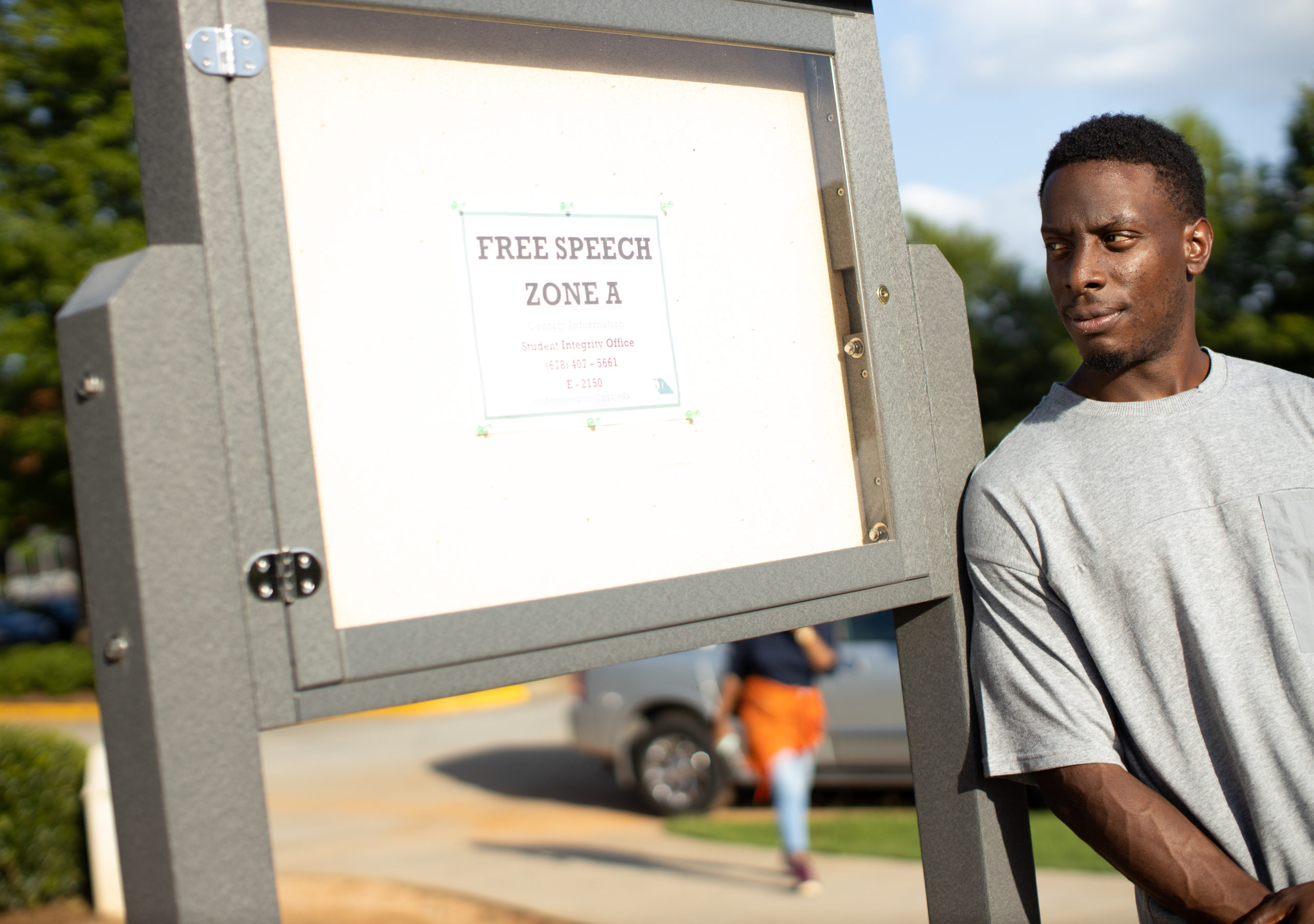 Chike Uzuegbunam stands next to a speech zone sign on the campus of Georgia Gwinnett College in Lawrenceville, Georgia. (Alliance Defending Freedom)

Georgia Gwinnett’s speech code policy that officials said Uzuegbunam violated prohibited speech that offended or disturbed other students, Langhofer told The DCNF. He was prevented from speaking on both occasions after other students complained to the school that he had made them uncomfortable.

“Colleges and universities are supposed to be places where we are free to explore and debate ideas, but my college silenced me and are getting away with it,” Uzuegbunam said in a statement Tuesday after oral arguments.

After ADF filed suit on behalf of Uzuegbunam, Georgia Gwinnett initially defended its speech code policy vigorously, according to Langhofer. But, the school later reversed its speech policy and argued in court that it should be able to avoid penalty since the policy was no longer in place.

One year after the lawsuit was filed, the U.S. District Court for the Northern District of Georgia sided with school officials, ruling that because the policy had been changed and Uzuegbunam had since graduated, he had no standing, according to The Becket Fund for Religious Liberty. The Eleventh Circuit Court of Appeals upheld the district court’s ruling and in July, the Supreme Court agreed to hear the case. 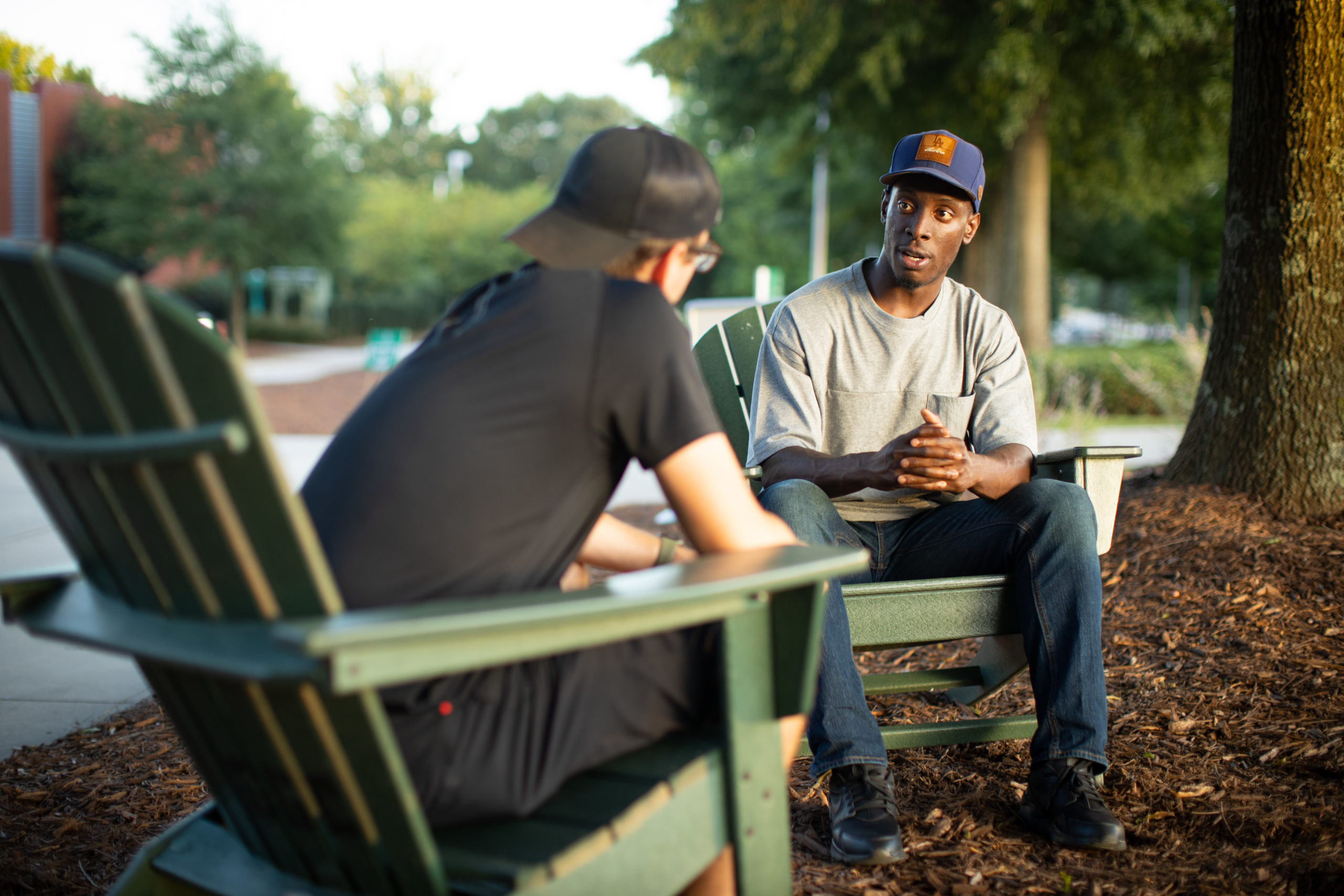 Chike Uzuegbunam (right) speaks to another student on the campus of Georgia Gwinnett College in Lawrenceville, Georgia. (Alliance Defending Freedom)

Waggoner added that the case had broader implications since 90% of all U.S. colleges have similar “constitutionally suspect” speech code policies as the one Georgia Gwinnett had implemented. (RELATED: Court Sides With College Student Who Was Removed From Leadership Position Over BLM Texts)

“It’s wrong for government officials to violate the constitution with no accountability, our right to speak freely, to assemble, to share our faith, to receive due process, these rights are priceless for all Americans,” Uzuegbunam said during the press conference.

A wide range of organizations from the American Civil Liberties Union and American Humanist Association to the Frederick Douglass Foundation and U.S. Conference of Catholic Bishops filed friend-of-the-court briefs in support of Uzuegbunam.