The FBI used specialists from its Special Surveillance Group unit — sometimes referred to as “ghosts” — to track Carter Page while he was still on the Trump campaign, according to newly declassified FBI documents.

The plan to surveil Page with the special investigators, known as SSGs, is laid out in an Aug. 24, 2016, memo from the FBI team investigating the Trump campaign.

President Donald Trump declassified the memo and other documents during his last week in office. The memo, referred to as an operational plan, was published by Just the News.

The FBI memo provides few details of its use of SSGs to follow Page. It is also unclear where the surveillance occurred. Page served as an adviser to the Trump campaign until late September 2016.

The memo says: “SSG assets from [redacted] will cover CD during CD’s time in [redacted].”

The FBI uses SSGs to conduct on-the-ground surveillance of terror suspects or potential spies, both in the U.S. and abroad. Eric O’Neill, a former SSG who worked on the investigation of Robert Hanssen, an FBI official caught spying for Russia, has dubbed the special investigators “ghosts” because of the operational tactics they use to avoid detection by surveillance targets.

The FBI had opened an investigation on July 31, 2016, into whether Page and three other Trump campaign advisers were working as foreign agents of Russia.

Two months after the memo, the FBI obtained the first of four Foreign Intelligence Surveillance Act (FISA) warrants against Page.

The FBI relied heavily on allegations from former British spy Christopher Steele in its applications for the surveillance warrants. Steele’s information has largely been undercut by multiple federal and congressional investigations, which found no evidence that anyone on the Trump campaign conspired with Russia to influence the 2016 election. (RELATED: A London Meeting Before The Election Aroused George Papadopoulos’s Suspicions)

The FBI memo also describes the technical preparations the FBI made ahead of meetings between Page and Stefan Halper, the FBI confidential human source.

The memo said that the confidential human source (CHS), who has been identified as Halper, offered to allow the FBI to install recording devices at his home. 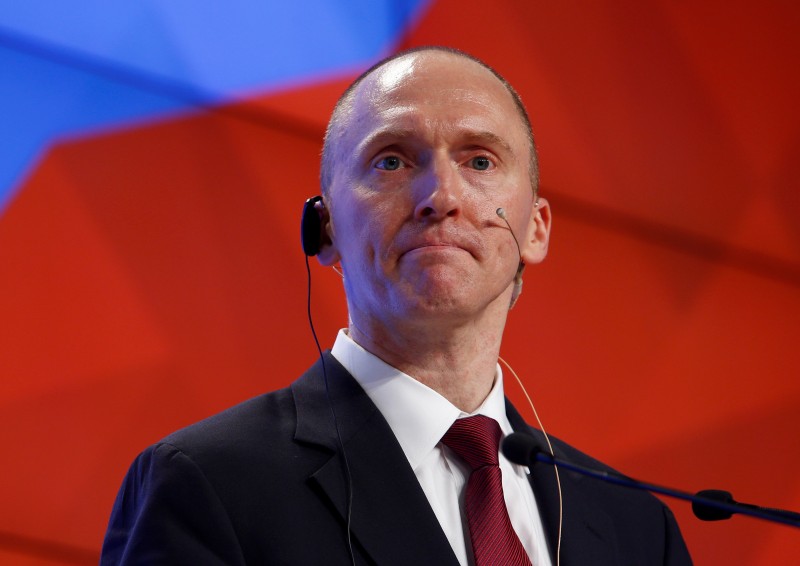 During the Oct. 17, 2016 meeting, Page repeatedly denied allegations made against him in the Steele dossier, according to another declassified FBI document.

Steele, a former MI6 officer who investigated the Trump campaign on behalf of Democrats, alleged that Page met secretly in Moscow in July 2016 with Igor Sechin, the CEO of Russian oil giant Rosneft and a close ally of Vladimir Putin. Steele also claimed that Page met with a Kremlin official, Igor Diveykin, to discuss the exchange of blackmail material on Hillary Clinton and Donald Trump.

Page told Halper that the allegations about his meetings with the Russians were a “lie.”

“The core lie is that I met with these sanctioned Russian officials, several of which I never even met in my entire life, but they said that I met them in July,” he said, according to the FBI transcript.

Page also denied having any knowledge about Russia’s release of Democrats’ emails.

“I know nothing about that — you know, on a personal level, no one’s ever said one word to me,” he told Halper.

The Justice Department’s inspector general and the presiding judge on the FISA Court blasted the FBI for withholding Page’s denials from it applications to surveil the Trump aide. The IG said that the exculpatory information should have been included in the applications.

Special Counsel Robert Mueller, who took over the FBI’s investigation of Trump, concluded that there was no evidence that any Trump associates conspired with the Russian government or acted as agents of Russia.

The FBI transcripts also show that Halper asked Page to facilitate an introduction to Sechin and Diveykin so that he could invite them to a conference at the University of Cambridge.

Halper at the time was a professor at the historic British university. He was a founding member, along with former MI6 chief Richard Dearlove, of the Cambridge Intelligence Seminar, which hosted current and former intelligence operatives.

“It would be very interesting to have them at [redacted] and to have — if you wish — for you to come, and I could invite them,” Halper told Page, according to the transcript.

“It would be a very productive conversation. They’d enjoy it,” Halper added.

Page told Halper his lawyers would probably advise against reaching out to Sechin and Diveykin because of the heat generated by the allegations in the Steele dossier. 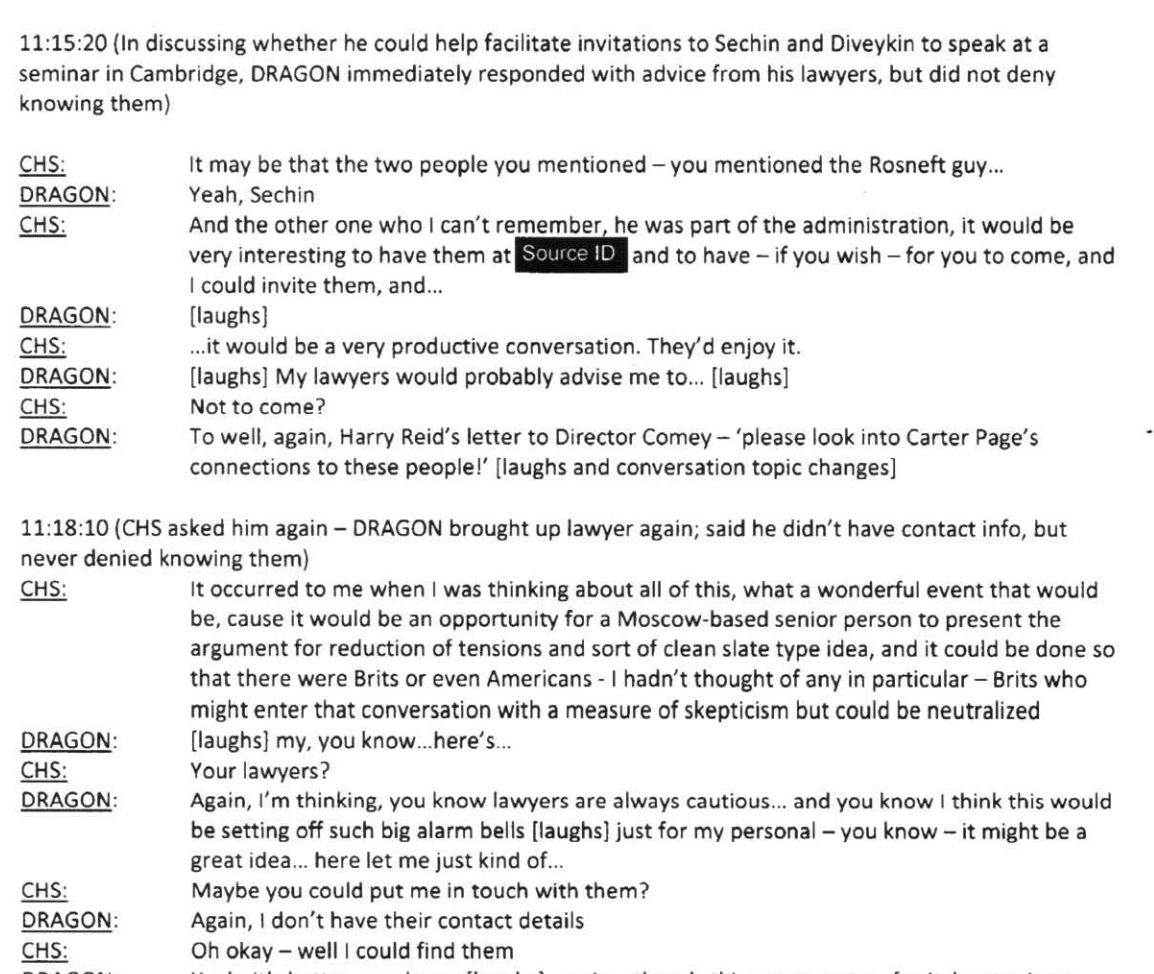 Halper circled back to Sechin and Diveykin later in his conversation with Page.

“It occurred to me when I was thinking about all of this, what a wonderful event that would be,” Halper said of the potential Cambridge event.

“It would be an opportunity for a Moscow-based senior person to present the argument for reduction of tensions and sort of clean slate type idea, and it could be done so that there were Brits or even Americans — I hadn’t thought of any in particular — Brits who might enter that conversation with a measure of skepticism but could be neutralized,” Halper said.

Page said that he thought “this would be setting off such big alarm bells.”

“Maybe you could put me in touch with them?” Halper said.

“Again, I don’t have their contact details,” replied Page.

Reached by The Daily Caller News Foundation, Page called the transcript “incredible, like pretty much everything else about this saga.”

Page met Halper for the first time at a political conference held at the University of Cambridge from July 10-12, 2016. Republicans have questioned the timing of the Cambridge event given that the FBI opened its investigation of the Trump campaign three weeks later.

Halper contacted two other Trump campaign advisers, Sam Clovis and George Papadopoulos, as part of his duties for the FBI. He lured Papadopoulos to London in mid-September 2016 under the guise of discussing an academic paper about the energy industry. Halper paid Papadopoulos $3,000 to write the paper.

A transcript of Halper’s conversations with Papadopoulos show the FBI source plied the Trump aide with questions similar to those posed to Page. Papadopoulos denied having any insight into Russia’s hacks of Democrats’ emails.

During one part of the conversation, Halper told Papadopoulos that he was friends with a former Russian intelligence officer, Vyacheslav Trubnikov.

Halper had hosted Trubnikov at the University of Cambridge in 2012 and 2015 and tapped him to contribute to a study he did for the Pentagon’s Office of Net Assessment.

The FBI did not respond to a request for comment.