Federal prosecutors on Friday charged a woman who allegedly filmed herself inside the U.S. Capitol on Jan. 6 saying that she wanted to “shoot” House Speaker Nancy Pelosi in “the friggin’ brain.”

Dawn Bancroft was arrested along with another woman, Diana Santos-Smith, and charged with unlawful entry of the Capitol and violent or disorderly conduct.

According to an FBI affidavit, Bancroft filmed herself inside the Capitol building after a mob of pro-Trump rioters broke into the building following a protest over the presidential election results.

“We broke into the Capitol,” Bancroft allegedly said in the video. “We got inside, we did our part.”

“We were looking for Nancy to shoot her in the friggin’ brain, but we didn’t find her,” Bancroft also said, according to the government affidavit.

Both Bancroft and Santos-Smith were wearing hats with the Trump slogan, “Make America Great Again,” the affidavit says.

According to the affidavit, FBI agents interviewed Bancroft and Santos-Smith on Jan. 20. Santos-Smith initially claimed that they did not enter the Capitol, but she later admitted she lied about doing so when showed video from inside the building. (RELATED: Man Arrested For Threatening To Shoot Nancy Pelosi)

The affidavit does not say whether Bancroft or Santos-Smith were armed inside the Capitol.

Dozens of people have been arrested in connection with the riots, on charges ranging from unlawful entry to assault of police officers. 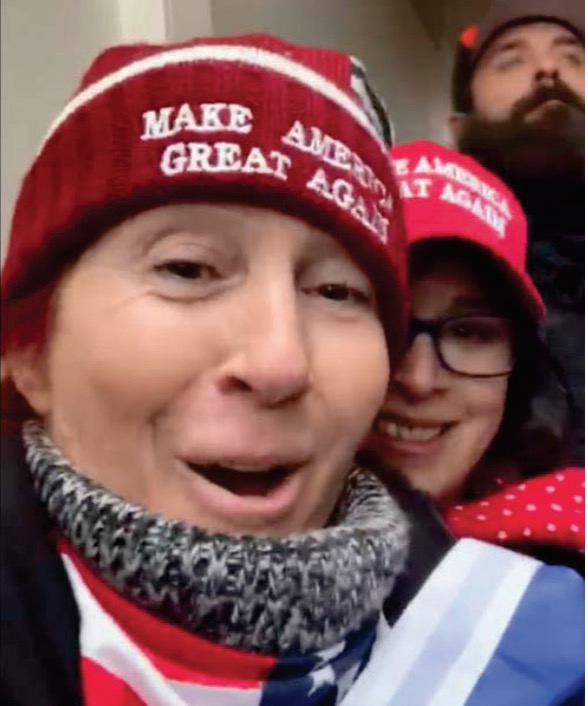 Five people died during the Capitol melee, including Capitol police officer Brian Sicknick, who was reportedly assaulted with a fire extinguisher. Ashli Babbitt, a Trump supporter from San Diego, was fatally shot by a police officer after attempting to enter a barricaded part of the Capitol.

The FBI has issued a $100,000 reward for information about a person who was seen planting pipe bombs outside of the Democratic and Republican party headquarters on the night before the Capitol protests.

Pelosi was one of the main targets of protesters and rioters who descended on the Capitol.

Cleveland Meredith, a Trump supporter from Georgia, was charged with making interstate threats over a text message he sent to an associate on Jan. 7, in which he said he was “Thinking about heading over to Pelosi C*NT’s speech and putting a bullet in her noggin on Live TV.”