Dobbs had “no comment at this time” regarding the news, according to CNN’s Oliver Darcy. Despite not commenting publicly, Dobbs did spend the evening somewhat addressing his potential view of the situation by retweeting posts condemning Fox News over the decision.

“Lou Dobbs told me over text message (first to @oliverdarcy) that ‘I have no comment at this time,'” the Washington Post’s media reporter Jeremy Barr noted. “But he seems to be sending a message through his retweets…”

Lou Dobbs told me over text message (first to @oliverdarcy) that “I have no comment at this time.” But he seems to be sending a message through his retweets… https://t.co/y7uq0JBcuq

One retweet declared that the network cancelled Dobbs’ show because “he is a truth teller” and “a threat to the giant cabal.” Another individual that Dobbs retweeted wrote: “Fox is in a race with itself to the bottom.” The former Fox Business host also retweeted former White House adviser Sebastian Gorka, who wrote that “#FOXisfinished.” 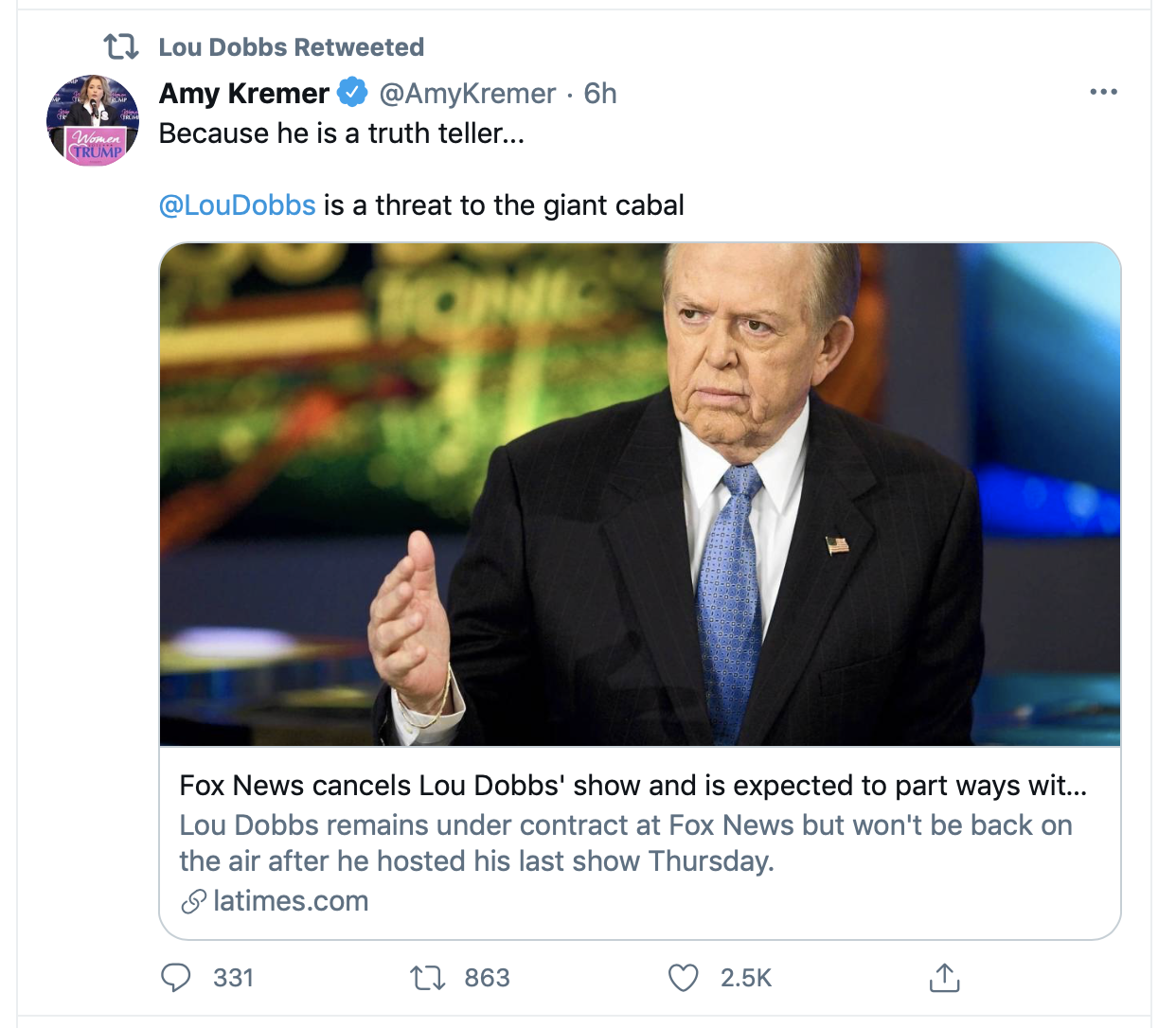 “Canceling @LouDobbs was a grave mistake,” yet another retweeted post from Dobbs reads.

Dobbs also took time to thank former President Donald Trump for his “kind words” about the show being cancelled. Trump is banned from Twitter but Amy Kremer, the co-founder for Women for Trump, posted a statement of support from the former president.

“Lou Dobbs is and was great,” Trump said according to Kremer. “Nobody loves America more than Lou. He had a large and loyal following that will be watching closely for his next move, and that following includes me.”

Other retweets throughout the evening included various people declaring that they plan to follow Dobbs on his next venture. Dobbs is still under contract at Fox News, according to the LA Times, but it is unlikely that he will appear on any show for the network again.

Dobbs began at Fox Business in 2010 and his show “Lou Dobbs Tonight” was “the #1 news program on business television,” according to the network.

“FOX News Media is committed to providing the full context of every story with in-depth reporting and clear opinion. We are proud of our 2020 election coverage and will vigorously defend against this meritless lawsuit in court,” a Fox News spokesperson told the Daily Caller.

Dobbs was forced to issue a fact-checking clip on his show in December 2020 after Smartmatic issued a legal letter alleging “false and defamatory statement and reports,” The Daily Beast reported at the time.

Fox News has said that the decision to cancel Dobbs’ show was “part of … planned changes” that have been ongoing at the network.

“As we said in October, Fox News Media regularly considers programming changes and plans have been in place to launch new formats as appropriate post-election, including on Fox Business,” a Fox News spokesperson said, according to the LA Times. “This is part of those planned changes. A new 5 p.m. program will be announced in the near future.”

This story has been updated with a statement provided by Fox News.