The chairman of a blue-ribbon commission working with the United Nations and the World Health Organization to investigate the origins of the coronavirus pandemic has a history of praising and working with China while criticizing the U.S. government.

Jeffrey Sachs, a Columbia economist, formed the Lancet COVID-19 Commission, affiliated with the prominent British medical journal of the same name, in July 2020 to investigate the virus’s origins.

Commission member Peter Daszak, a zoologist who is on the Lancet commission, served as the only American on a WHO team that recently visited Wuhan, China, to investigate the spread of the virus.

Daszak has been accused of having conflicts of interest due to millions of dollars of grants he has received from the U.S. government for research with the Wuhan Institute of Virology, which some U.S. officials have said may have been the initial, accidental source for the coronavirus.

Daszak, Sachs and the Chinese government have all vehemently disputed the so-called lab leak theory.

Sachs has also come under some scrutiny in the past for his praise of Chinese government initiatives and his appearances on China state-controlled media outlets criticizing the Trump administration.

In June 2020, Sachs accused the U.S. government of “trying to create a new cold war” with China.

In December 2018, he called the U.S. government “today’s greatest threat to the international rule of law” and “global peace” after the U.S. asked Canada to arrest an executive with the Chinese tech firm Huawei.

He also accused former Secretary of State Mike Pompeo of “stirring the pot to raise tensions” after the diplomat criticized Chinese authorities’ crackdown on pro-democracy protesters in Hong Kong.

Peter Daszak, a member of the World Health Organization (WHO) team investigating the origins of the COVID-19 coronavirus, speaks to media upon arriving with other WHO members to the Wuhan Institute of Virology in Wuhan in China’s central Hubei province on February 3, 2021. (HECTOR RETAMAL/AFP via Getty Images)

The Lancet COVID-19 Commission has afforded Sachs access to both the United Nations and the WHO, both of which have been accused of appeasing the Chinese government amid fallout over Beijing’s early cover up of the severity of coronavirus.

The commission’s website says it partners with The Lancet, the prominent medical journal, and with the United Nations Sustainable Development Solutions Network, which was formed in 2012 by then-UN Secretary-General Ban Ki-Moon.

It is unclear what influence the Lancet commission has had on WHO and UN’s coronavirus related efforts, but Sachs co-hosted an online forum on Dec. 17 with the WHO to discuss Asian countries’ handling of the pandemic.

Sachs, who served as an adviser to the UN from 2002 to 2018, also met with the president of the United Nations General Assembly on Jan. 22 to discuss the Lancet commission’s work.

Sachs has also appeared on CNN to tout a study he co-authored at Columbia in October that estimated that then-President Donald Trump’s policies were responsible for between 130,000 and 210,000 additional COVID-19 deaths.

The Lancet commission claimed in its early statements that it would investigate all theories about the virus origins with an open mind, though remarks from Daszak and Sachs both suggest that they dismissed the lab leak theory long ago.

The commission listed 10 priorities for action in its initial statement on Sept. 14, 2020.

The top priority, the commission said, was to “Track down the origins of the virus in an open, scientific, and unbiased way not influenced by geopolitical agendas.”

Daszak, who leads the New York-based EcoHealth Alliance, said in a statement on Nov. 23 that the commission would conduct “a thorough and rigorous investigation” into the early spread of the virus.

But emails recently released by U.S. Right to Know, a health care watchdog group, show that Daszak organized a group of 27 scientists back in February 2020 to sign a letter published by The Lancet calling the accidental lab leak hypothesis a “conspiracy theory.”

U.S. Right to Know asserted that the emails show Daszak had made up his mind about the theory nearly a year before he joined the WHO team investigating the virus origins in China.

Daszak, along with many other scientists, have embraced the theory that the virus jumped from an animal species to humans, likely at a food market in Wuhan. (RELATED: Sole American Scientist On WHO Team Says US Intel Can’t Be Trusted)

The watchdog group has also accused Daszak and the EcoHealth Alliance of having a conflict of interest because of grants the group has received from the U.S. government for work with the Wuhan lab.

Sachs also dismissed the lab leak theory before the Lancet commission had investigated the virus’s origins.

In a virtual discussion in September, Sachs called the lab leak hypothesis “an extremely dangerous point,” but said it was “important” to publicly dispute it.

Daszak has been one of the more vocal members of the 17-member WHO investigative team.

After State Department spokesman Ned Price said on Feb. 9 that the U.S. government planned to independently review the WHO team’s findings, Daszak shot back on Twitter, urging: “don’t rely too much on U.S. intel.”

The leader of the WHO team, Peter Ben Embarek, said last week that the theory that the virus was the result of an accidental lab leak from the Wuhan Institute of Virology was “extremely unlikely.”

The New York Times declared Embark’s remarks a “public relations win” for the Chinese government since officials there have long denied the lab leak hypothesis.

The WHO’s assessment has been met with wide skepticism, even within President Joe Biden’s administration, which has defended the WHO against conservative threats to defund it over its alleged appeasement of China.

Some scientists have cast doubt on the WHO’s findings, pointing to Daszak’s role on the team.

“I was not surprised at all about the conclusions of the WHO. Having Daszak on board and deciding to visit a few labs in Wuhan only after pressure from the media was not very promising,” Rossana Segreto, a researcher at the University of Innsbruck, told the Daily Caller.

While Sachs has no apparent financial ties to the Wuhan lab, he has for years been a reliable defender of China’s foreign and domestic policy. From 2001 to 2002, he advised China’s State Development Planning Commission, which sets the communist regime’s economic policies.

Sachs became a frequent guest of China’s state-controlled media outlets to voice criticism of Trump’s aggressive stance toward Beijing. The Washington Free Beacon reported some of his comments last year after progressive Democrats floated Sachs for a position in the Biden administration’s Treasury Department.

In an interview in April 2020 with CGTN, which the U.S. government considers a Chinese propaganda outlet, Sachs called Trump’s threat to cut funding to the WHO “disgusting” and “disgraceful.”

Trump had called for defunding the WHO based on allegations that it had failed to hold the Chinese government accountable for withholding data about the coronavirus.

On Jan. 14, 2020, the WHO cited Chinese authorities making the now-debunked claim that coronavirus was likely not infectious.

Sachs does not appear to have criticized the Chinese government over its bungled pandemic response.

Prior to the pandemic outbreak, Sachs contributed to a position paper released in November 2018 by Huawei, which manufactures surveillance equipment that the Chinese government has used to track Uighurs. 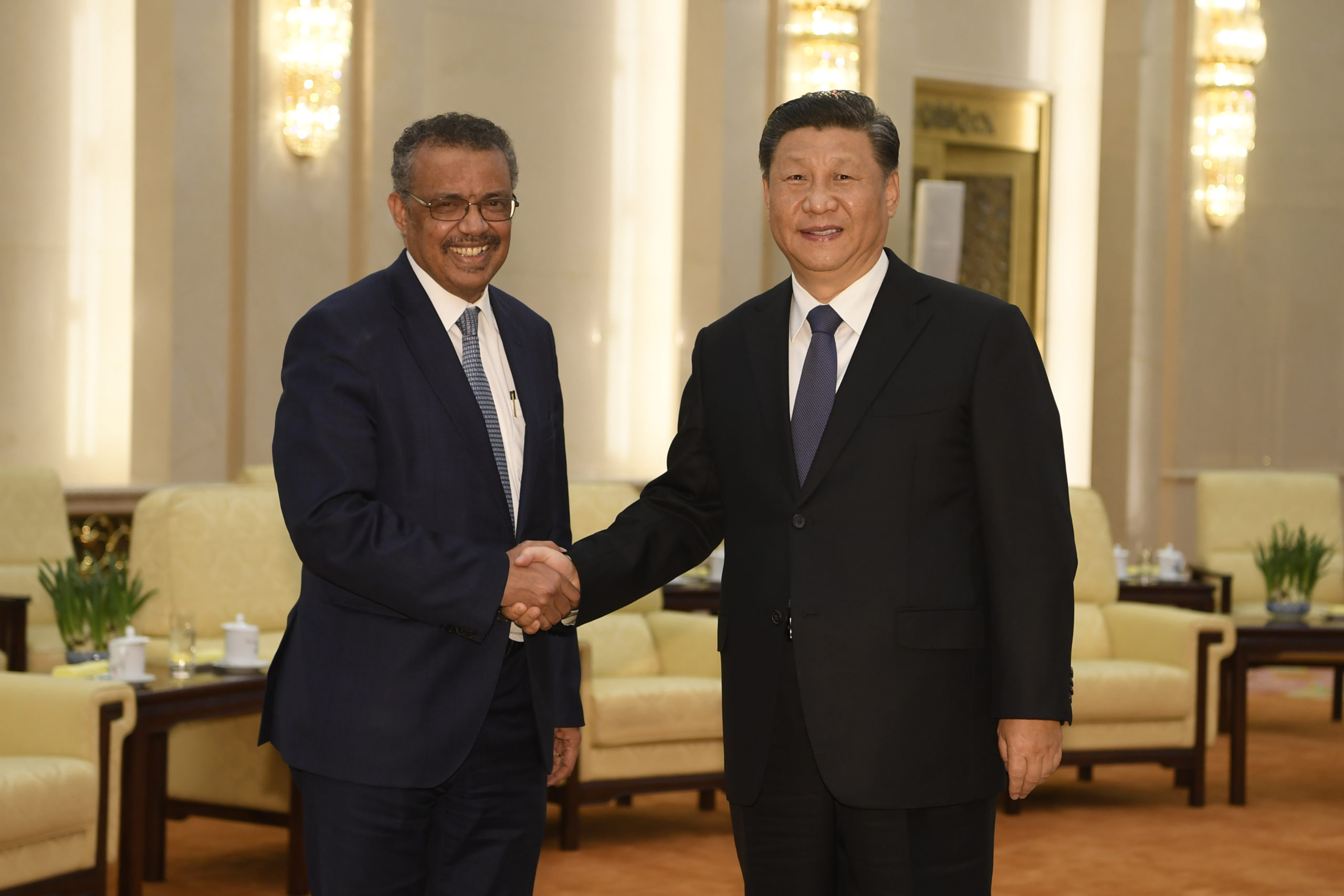 “China has done more to reduce extreme poverty in a short period of time than any other country in history,” Sachs told the Beijing-controlled Xinhua News Agency in an interview that aired earlier this month.

The Chinese consulate in Australia tweeted out the video.

Sachs has also refused to condemn the Chinese government for engaging in intellectual property theft, and for human rights abuses against Uighurs in western China.

Instead, he accused the U.S. in an interview last month of engaging in similar human rights abuses and underhanded business tactics.

“Thereʼs no purity in this topic,” Sachs continued. “Thereʼs a lot of industrial espionage and cheating by U.S. companies.”

Sachs deflected questions about China’s human rights abuses against Uighurs, which Tony Blinken, the secretary of state under Biden, recently characterized as a “genocide.”

“We have huge human rights abuses committed by the U.S. on so many fronts,” Sachs said in the interview.

Sachs was on the advisory board to the China Energy Fund Committee, a think tank funded by CEFC China Energy, a now-defunct energy conglomerate affiliated with China’s People’s Liberation Army.

Sachs appeared at several events hosted by Patrick Ho, the chairman of the think tank.

During one event, Sachs praised China’s economic sustainability initiative, One Belt, One Road, at a China Energy Fund Event held in 2016.

“This plan is a pivotal one for China,” Sachs said at the event, according to China Daily.

Patrick Ho, the chairman of the think tank, was indicted and convicted on charges that he offered bribes on behalf of CEFC China Energy to two African leaders to purchase oil rights in their countries.

Federal prosecutors obtained a Foreign Intelligence Surveillance Act (FISA) warrant on Ho based on the suspicion that he was working as a secret foreign agent, according to court filings in his case.

Sachs is also on the board of the Center for International Relations and Sustainable Development, a Serbian think tank founded by Vuk Jeremic, a former Serbian foreign minister who served as president of the UN General Assembly through 2012.

Jeremic testified at Ho’s trial that he made the introductions to the African officials who Ho tried to bribe.

Jeremic lobbied Hunter Biden to help him with his failed campaign for UN secretary-general in 2016, according to emails from Biden’s laptop.

The Lancet commission did not respond to questions about Sachs’ and Daszak’s past remarks, saying instead that the task force “will thoroughly and objectively review all publicly available evidence, and conduct interviews with key leaders in diverse fields.”

A spokesperson for the commission said that investigators “will carefully assess all leading hypotheses that have been raised about the origins of COVID-19, from a natural zoonotic event to a laboratory release.”

The commission plans to publish a final report in the Lancet.

Sachs did not respond to a detailed list of questions.