A U.S. nonprofit with close ties to the Wuhan Institute of Virology violated federal law by failing to disclose that taxpayer funds supported its work, according to a complaint a taxpayer watchdog group filed Monday.

EcoHealth Alliance (EHA) diverted $600,000 in taxpayer funds to the WIV in the form of National Institutes of Health subgrants between 2014 and 2019 as part of a research project studying coronaviruses from Chinese bats. But press releases from EHA describing the project failed to disclose that the project was backed by federal dollars, an omission that, according to the White Coat Waste Project, is a violation of a federal law known as the Stevens Amendment.

“Virtually all of EHA’s press releases reporting its taxpayer-funded experiments over the last three years violate the Stevens Amendment,” the White Coat Waste Project wrote in its complaint filed Monday with the National Institutes of Health Office of Management Assessment. “The releases fail to acknowledge federal funding, and/or fail to report the amount of taxpayer money spent, and/or fail to report the percentage of the project paid for with taxpayer funds.”

The Stevens Amendment requires that any group that receives funding from the departments of Labor, Health and Human Services and Education disclose the percentage of costs financed with federal funds and the federal dollar amount in any statements, press releases, bid solicitations and other documents describing a project supported by those agencies, according to the Government Accountability Office.

The White Coat Waste project flagged in its complaint three EHA press releases that touted its work on bat-based coronaviruses in China that did not disclose the percentage or dollar amount of project costs financed with federal dollars. EHA’s work with the WIV studying bat-based coronaviruses was funded with a $3.4 million NIH grant, according to The Wall Street Journal.

While some press releases on EHA’s website do disclose that NIH funded its work, the Daily Caller News Foundation did not locate any that indicated the dollar amount or percentage of costs funded by federal funds.

The White Coat Waste Project’s complaint called on the NIH, an agency within the HHS, “permanently disqualify EHA from receiving taxpayer funding” in light of its alleged transparency violations.

“Taxpayers have a right to know — and federal law requires that we’re told — exactly how much of our money EcoHealth has shipped to the notorious CCP-run Wuhan animal lab for reckless coronavirus experiments that may have caused the pandemic,” White Coat Waste Project spokesman Justin Goodman told the DCNF. “EcoHealth’s rampant violations of federal transparency law are yet another example of the group and its President Peter Daszak obscuring their close ties to — and financial support for — the Wuhan Animal Lab.”

Sen. Joni Ernst told the DCNF that she will demand an investigation into the federal government’s failure to enforce the Stevens Amendment in light of the revelations in the White Coat Waste Project’s letter.

“The federal government is failing to comply with the law and disclose how many American taxpayer dollars go to research labs around the world, like the Wuhan Institute of Virology—a reported and potential origin of the novel coronavirus,” the Iowa Republican said. “The American people deserve answers.”

“I’m demanding an investigation to compel HHS to comply with the law,” Ernst continued. “This isn’t Communist China; the law isn’t optional.”

Ernst issued a letter to HHS Principal Deputy Inspector General Christi Grimm on Thursday urging a thorough review of the department’s enforcement and compliance of the Stevens Amendment.

The WIV’s past work conducting gain-of-function research on bat-based coronaviruses, its proximity to the first known cases of COVID-19 and China’s lack of transparency surrounding the lab has led to widespread speculation that the virus could have entered the human population due to an accidental leak from the institution.

Gain-of-function is a type of research in which scientists intentionally make pathogens more deadly in a lab setting with the intention of getting ahead of any future outbreaks. Critics of the procedure say it’s not worth the risk as it introduces the possibility that a non-natural pathogen could enter into the human population.

The NIH banned funding of gain-of-function research in 2014 due to safety concerns, but the ban was lifted in 2017.

U.S. diplomats wrote two cables to Washington D.C. in 2018 warning of safety issues at WIV. The cables specifically noted that researchers at the lab had discovered new bat-based coronaviruses that could easily infect human, Politico reported. Their warnings went ignored. 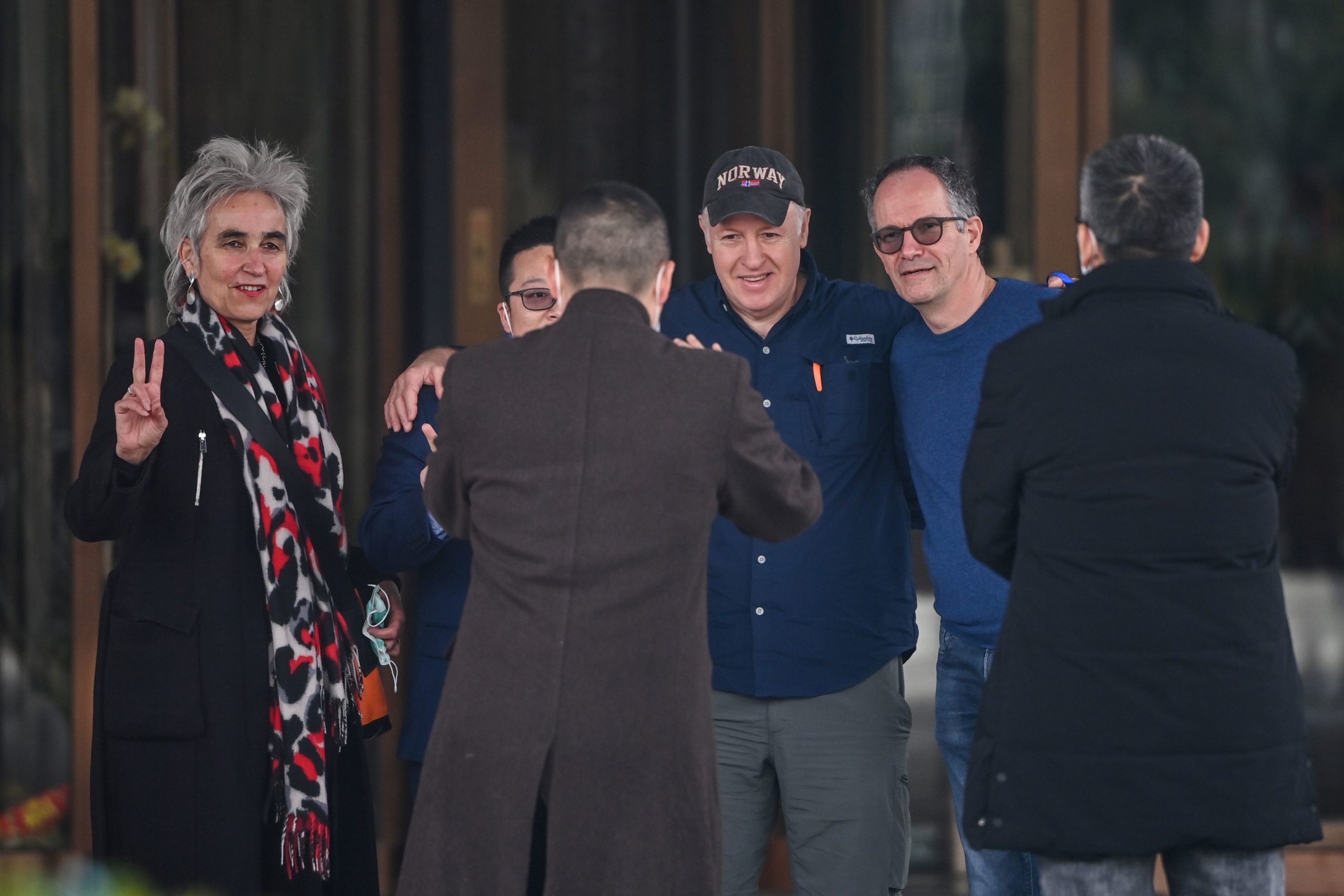 WHO team members Marion Koopmans (L), Peter Daszak (3rd R) and Peter Ben Embarek (2nd R) pose for a picture as Koopmans and Daszak leave their hotel after the World Health Organization (WHO) team wrapped up its investigation into the origins of the COVID-19 coronavirus in Wuhan. (HECTOR RETAMAL/AFP via Getty Images)

Daszak, the EHA president, was the only American member of the World Health Organization’s 2021 team that investigated the origins of COVID-19 in China. Daszak said Wednesday that the WHO team did not ask to review a database of at least 16,000 virus samples that the WIV deleted in September 2019 because he personally vouched for the lab, saying the data did not contain relevant information on the pandemic’s origins.

Daszak’s involvement in the WHO probe has been described as a major conflict of interest due to his financial and professional ties with the WIV. Critics have also noted that Daszak appeared to have made up his mind on the lab leak theory at the onset of the pandemic, having organized a statement in The Lancet medical journal in February 2020 condemning “conspiracy theories” suggesting that COVID-19 does not have a natural origin.

A spokesperson for Daszak later admitted to The Wall Street Journal that Daszak’s letter was intended to protect Chinese scientists from online criticism. (RELATED: The Man At The Center Of The World’s Biggest Story Has A Conflict Of Interest. Why Won’t The Media Report It?)

The WHO team announced during a joint press conference with Chinese officials in February that their investigation concluded that it’s “highly unlikely” that COVID-19 could have accidentally leaked from a Chinese lab and that the theory was not worth further investigation.

WHO Director-General Tedros Ghebreyesus walked back the announcement just days later, saying that all theories on the origins of the pandemic, including the lab leak hypothesis, “remain open and require further study.”

EHA did not immediately return a request for comment.