Amazon illegally fired Emily Cunningham, a user experience designer, and Maren Costa, a principal UX designer, last year after the two aggressively advocated that the company reduce its carbon footprint and improve working conditions for employees, the National Labor Relations Board (NLRB) ruled Monday, according to The New York Times.

“It’s a moral victory and really shows that we are on the right side of history and the right side of the law,” Cunningham told the NYT. (RELATED: Historic Amazon Unionization Vote Ends This Week. Here’s Why Amazon Likes Its Chances)

Cunningham and Costa organized Amazon Employees for Climate Justice, an internal Amazon group that has pushed Amazon to lower its emissions and asked Amazon to approve workers’ rights measures like paid time off to vote during the 2020 presidential election. The group also criticized Amazon policies, which they alleged prevented them from speaking out on such issues.

“The climate crisis is a humanitarian emergency and not an isolated work issue,” Cunningham wrote last year. “We need to openly talk about this. Amazon communication policies should never require employees to be silent on public issues of such moral gravity.” 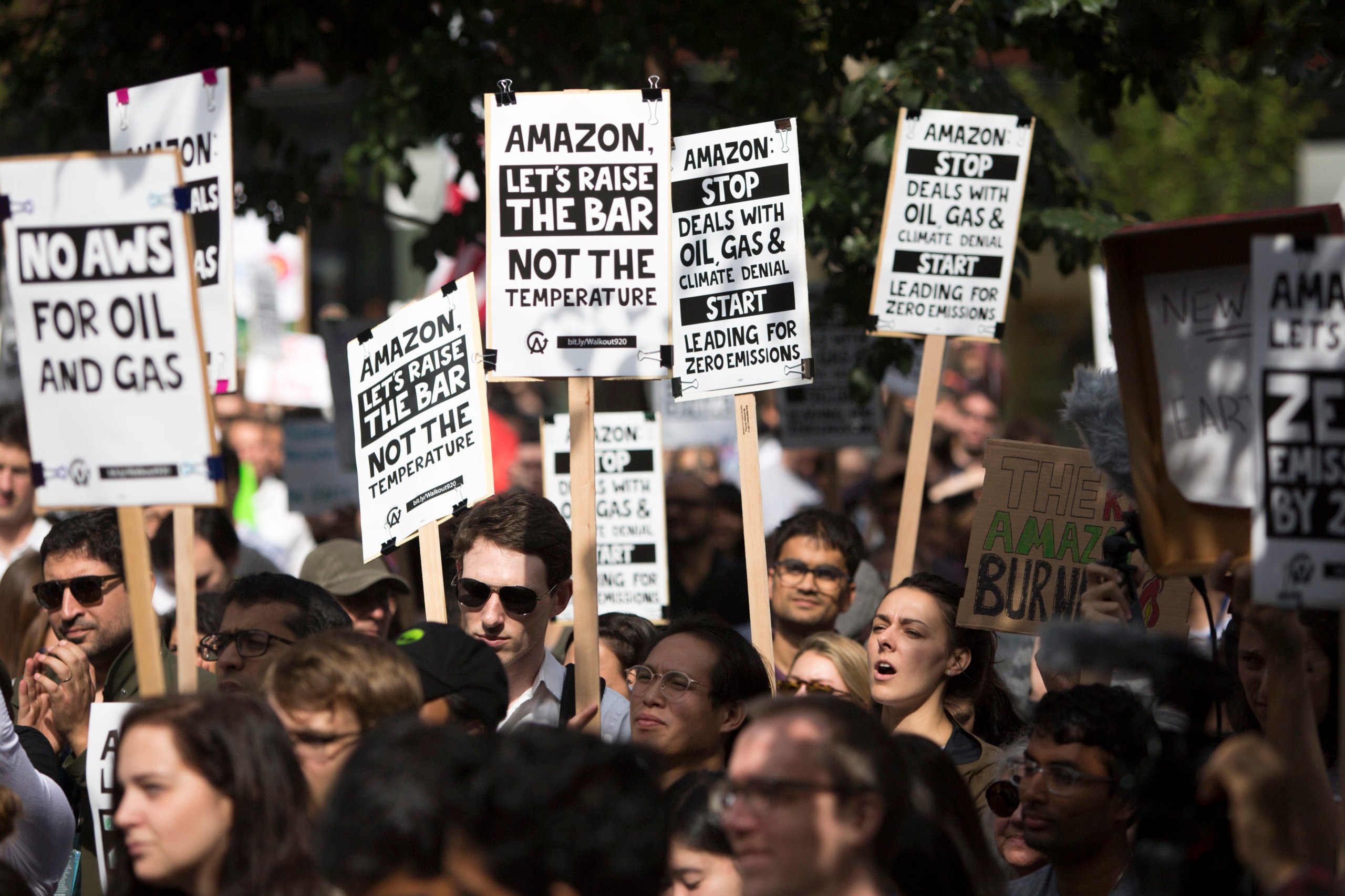 Amazon Employees for Climate Justice lead a walk out and rally at the company’s headquarters in Seattle, Washington on Sept. 20, 2019. (Jason Redmond/AFP via Getty Images)

However, Amazon said it fired Cunningham and Costa because the pair had violated “internal policies,” not because they spoke out specifically on climate and workers’ rights, according to the NYT.

“We terminated these employees not for talking publicly about working conditions, safety or sustainability but, rather, for repeatedly violating internal policies,” Amazon spokesperson Jaci Anderson told the NYT.

Amazon had warned the pair that they violated the company’s internal communications policy, which prohibits employees from speaking about company business publicly, according to the NYT. In response, Cunningham and Costa organized 400 employees to all speak out on the issue.

“Corporations cannot own the conversation that threatens our very existence,” Costa wrote as part of the effort. “We can’t be silent about issues that harm our children, communities, and planet.”

The pair of employees were fired in April 2020, shortly after organizing the employees to publicly criticize Amazon, the NYT reported. (RELATED: Elon Musk Must Delete Anti-Union Tweet, Rehire Fired Employee, Labor Board Rules)

“Today is a reminder that Amazon will break the law to silence its own workers who speak out about the dangerous work conditions frontline workers are facing during this pandemic,” United Food and Commercial Workers International (UFCW) Union President Marc Perrone said in a statement Monday.

“Amazon’s illegal retaliation against these whistleblowers makes the Amazon union election in Alabama even more urgent as Bessemer employees exercise their right to make their voices heard,” Perrone continued.

UFCW and its affiliate the Retail, Wholesale and Department Store Union have led a unionization effort in an Alabama Amazon warehouse. The warehouse workers would be the first unionized Amazon employees in the U.S. if they approve unionization. The results of the election are expected this week.

Meanwhile, dozens of workers have complained to the NLRB about working conditions at Amazon over the past year, the NYT reported.

The labor board is considering opening a formal investigation into Amazon working conditions because of the increased number of complaints, NLRB spokesperson Nelson Carrasco told NBC News. The investigation would be a rare instance in which the board consolidates several issues into a single case.