RIO GRANDE VALLEY, TEXAS — Illegal migrants are repeatedly held outside overnight, sometimes in the rain and cold, without cover for them or law enforcement officials working to process them after they arrive in the Rio Grande Valley sector of southern Texas.

The Daily Caller News Foundation saw hundreds of illegal migrants held overnight where a handful of law enforcement officials, including a few Customs and Border Protection (CBP) agents worked on gathering biographical data while waiting hours for transportation near La Joya, Texas, on March 24 and March 27. CBP officials repeatedly refused to confirm or deny the situation in the Rio Grande Valley.

CBP agents are occupied with field processing groups of hundreds of illegal migrants mostly made up of family units and unaccompanied minors, who frequently wait up to 10 hours before moving to facilities due to a lack of available transportation, two active CBP agents told the DCNF.

Officials typically encounter the illegal migrants in poorly lit and unsecured areas where migrants are held for hours without access to bathrooms, an agent told the DCNF. The officials are only able to provide the migrants with water, so they won’t be given food until they are taken to a processing facility.

“I don’t think what we do matters. We are only social workers. D.C. doesn’t care, and they don’t want us to do our jobs or succeed. This will only get worse,” one of the CBP agents told the DCNF. 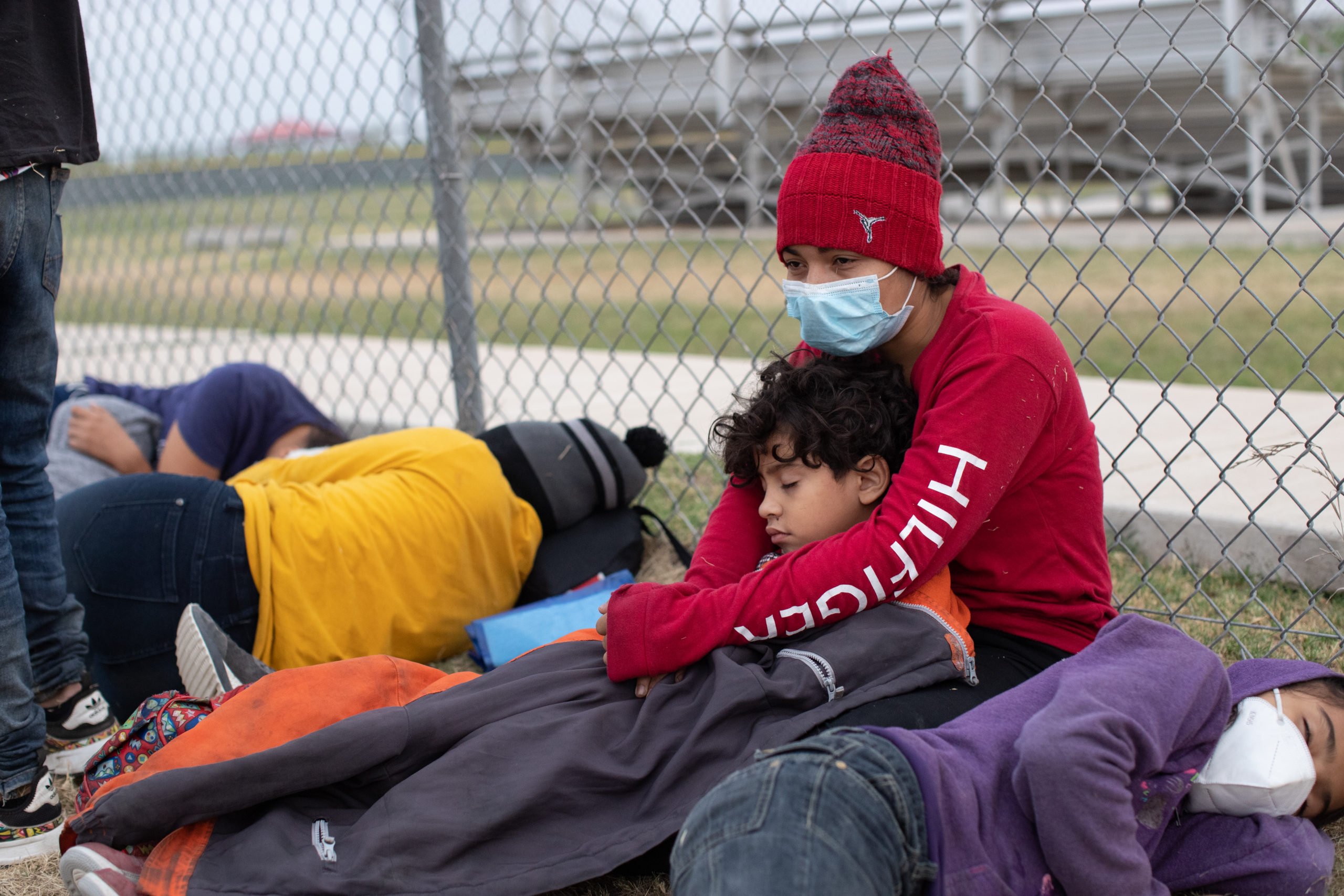 Several illegal migrants slept on the grass near the side of a public road as Customs and Border Protection officials worked to process the groups in La Joya, Texas on March 27, 2021. (Kaylee Greenlee – Daily Caller News Foundation)

Democratic lawmakers and activists criticized former President Donald Trump for overcrowded conditions in migrant detention centers including a lack of resources in June 2019, Reuters reported. Facilities in the Rio Grande Valley held twice as many people as they were meant to hold at the time. But during the Biden administration, some facilities have held over 4,000 migrants in a Donna, Texas, facility meant for 250 people, NBC News reported.

“It’s clear that their human rights were being neglected,” Democratic Rep. Joaquin Castro said in 2019, Reuters reported. Castro’s comments came after it was reported that migrants had not bathed for two weeks and denied access to medicine and sometimes running water.

At least 350 illegal migrants were encountered on Thursday when a cold front moved in over the area bringing rain and temperatures in the high 50s, a CBP agent told the DCNF. The migrants, including several infants and toddlers, and CBP officials waited outside without any kind of cover for around seven hours before busses arrived to transport the migrants to a facility.

“Every day we have to wait several hours for transportation for them,” a CBP agent told the DCNF, the agents spoke on the condition of anonymity since they were not authorized to speak on the matter. “It’s nothing new. It was just cold and raining yesterday and we have no coverage for them, so they were all wet and cold for that matter. Not humane at all.”

Another agent told the DCNF, “we don’t have enough transportation buses to take them all away in a timely manner. So they have been waiting here for five hours already and will probably be here until after 8 a.m., so making it about seven hours being wet and cold.”

The agents said they began encountering large groups of illegal migrants which led to transportation problems daily starting shortly after President Joe Biden’s inauguration. (RELATED: PHOTOS: Groups Of Illegal Migrants Wait On The Side Of A Road Overnight For Border Agents To Take Them Into Custody)

“Many [agents] are tied up working on the family units and then you may have two or three agents monitoring up to 200 to 500 family units and juveniles,” a CBP agent told the DCNF. “Transport is the biggest issue because we have waited up to seven hours with small children in family units, unaccompanied juveniles, etc.”

“We need at least three or four busses per shift dedicated to our station. Not every shift is busy, but we have been consistently waiting over six hours for transport,” the agent added. 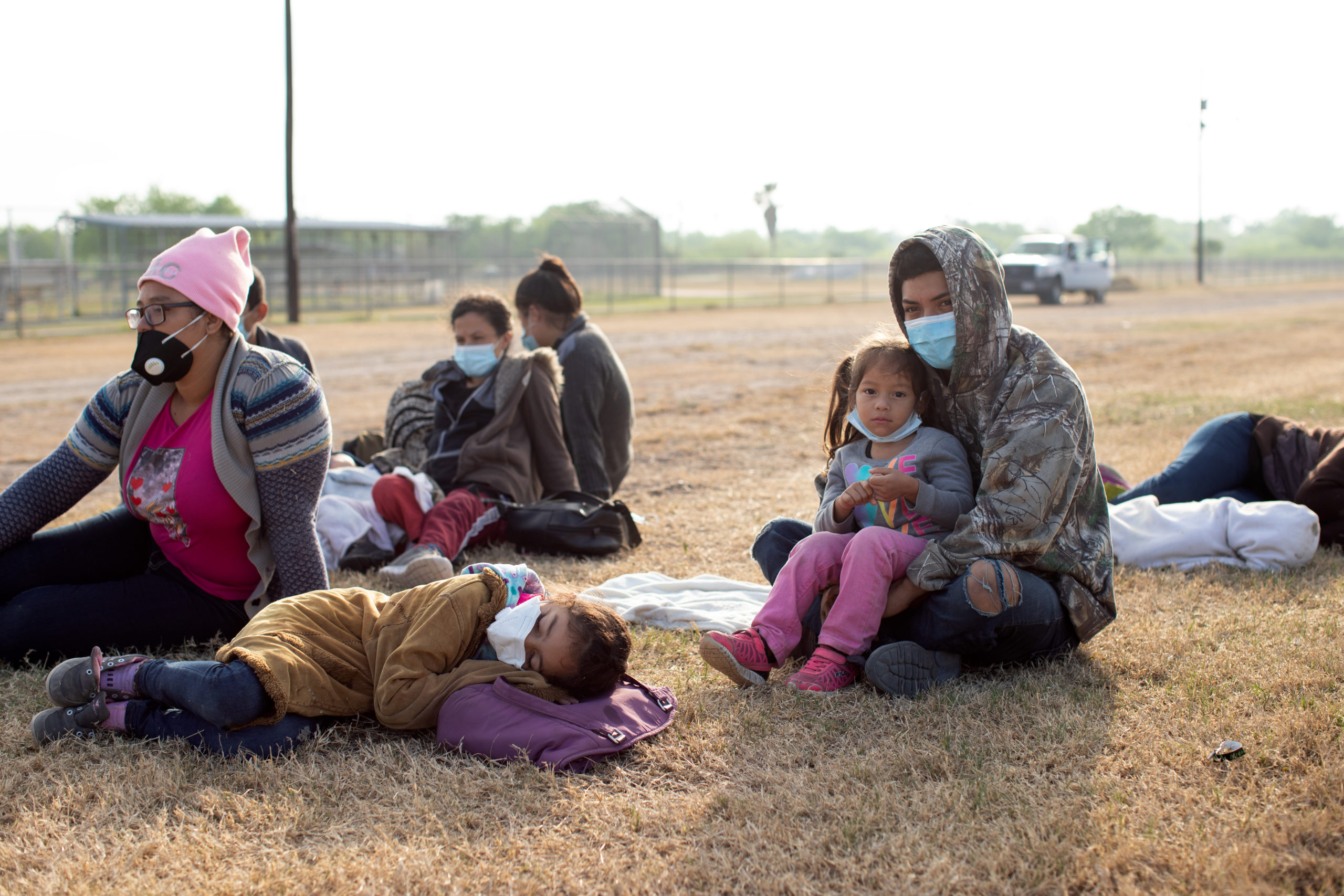 Several illegal migrants slept on the grass near the side of a public road as Customs and Border Protection officials worked to process the groups in La Joya, Texas on March 27, 2021. (Kaylee Greenlee – Daily Caller News Foundation)

The agent said providing portable toilets for the migrants to use would be helpful since they have to relieve themselves in the bushes or next to the road without access to sanitary products.

A CBP spokesperson did not say how the agency is working to provide more transportation resources to the agents, though they told the DCNF they are deploying additional agents to the Rio Grande Valley sector. The spokesperson said the agency seeks to ensure agents are “properly equipped to maintain border security.”

“We have large groups moving through The RGV at all hours of the day and night that place a strain on our resources and the logistics and coordination process for dispatching and transporting units and busses is a highly thought out process,” the CBP spokesperson told the DCNF. “Those agents … don’t want to be standing there for six or eight hours, but it’s just what we’re faced with right now.”

“We’re doing our best that we can to safely and orderly and rapidly move the migrants through the system and get them processed,” the spokesperson added.

CBP officials set up a temporary field processing area under the Anzalduas International Bridge near Mission, Texas, where illegal migrants were seen sleeping on the dirt with mylar blankets, according to Project Veritas.